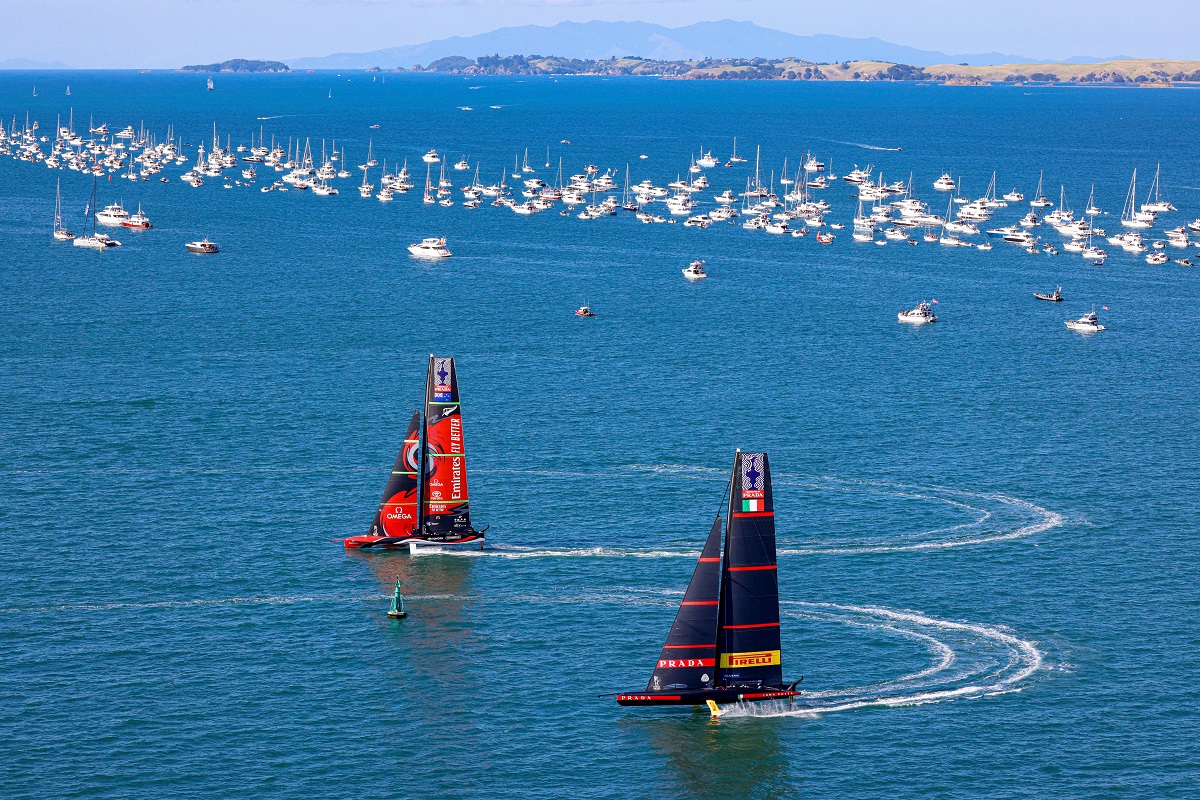 As if it was written in the script, Day 3 of the America’s Cup presented by PRADA is again locked up with Emirates Team New Zealand and Luna Rossa Prada Pirelli in a 3-3 tie – and to lift the Auld Mug, one of them needs to win seven races – so the regatta is still anyone’s.

Today’s racing was a copy of yesterday’s and the day before. Starts have been crucial and have played a big part in shaping the end result. And light breeze made staying up on foils the priority.

In contrast to many Cups that have gone before, these lightweight flying AC75s only need a small window to deliver an exciting race, sailing with an average speed of 30 knots; reached in less than 10 knots of wind.

On the water ahead of Day 3, it was another spectacular scene as over 1500 spectator boats lined the race course boundaries – and tomorrow at 4:15 pm is game on again.

In the minutes before the start sequence got underway the average wind speed was floating around the 7-8 knot range, just above the minimum 6.5 knot average required for racing.

In these conditions the expectation so far has been that this would favour the Italians with the Kiwis less comfortable in the light airs.

When the confirmation came that the minimum wind speed conditions had been met, the racing was on, the fifth race was about to begin in just 8 knots of true wind.

In the pre-start, after their march out to the right-hand side of the zone, both boats found themselves early for their passage back to the start line. This meant slowing down, but this was a risky move with the threat of coming off the foils in the process.

But there seemed little other option and as both boats settled down to the water’s surface Emirates Team New Zealand were in a trickier position and had more to lose.

As Luna Rossa got back underway and worked their way to the start line the Kiwis were stuck, struggling to get back on the foils and sailing a deep angle away from the line to do so.

The net result was that while the Italians made a clean start on time the Kiwis were struggling and were forced to tack for the line.

Eventually Team New Zealand get onto their foils but they had been left behind by the challengers who were free to head over to the left-hand side of the course where there was stronger breeze.

As Luna Rossa Prada Pirelli approached Gate 1, leading was not enough as Spithill and Bruni discussed their tactics for the first mark rounding.

“I don’t want to gybe too early as I want to give him gas at the top,” Bruni said in reference to their ability to add to the Kiwi issues by giving them turbulent air as they passed them on their way down leg 2.

The Italians had rounded 32 seconds ahead. By the bottom gate the difference was exactly the same as the pair chose opposite marks to round. If nothing else, this seemed to suggest that the speeds between the two boats remained much the same and the distance between them in this match was the result of an unforced error at the start.

By the second windward gate the Italians were still in the lead, but Emirates Team New Zealand had managed to pull back 10 seconds. The defender was still paying the price for a poor start, but clearly had a quick machine upwind; the Kiwis able to sail their own course in clear air.

By the top gate for the third and final time the Kiwis had once again hauled back a few seconds to round 23 seconds behind, a gain but the track record in this match suggested that a win on the final leg would be a big ask.

And indeed this is how it turned out as Luna Rossa Prada Pirelli crossed the finish 18 seconds ahead to take their third win in the 36th America’s Cup.