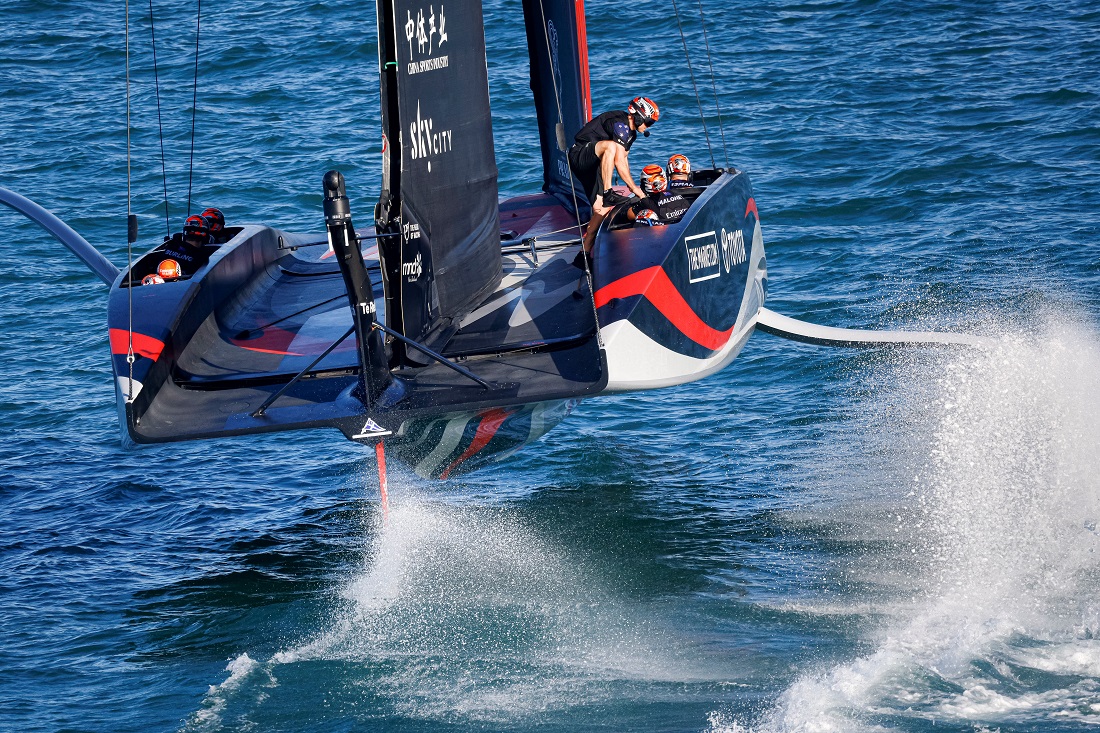 The shore crew checked every component of the AC75, whilst the sailing team debriefed Races 1 and 2 with their coaches working through their extensive playbook to review what unfolded in both races, plus spending time with team meteorologist, Roger ‘Clouds’ Badham, to plan for the light and complex conditions forecast for today.

If the first day of racing was about sizing up your opposition – from today it is all about dominating them. The intensity has ramped up, and for both teams, today is all about starting well, staying up on the foils, and making a statement.

Race 3
Following a delay due to spectators encroaching the racecourse boundaries, Race 3 started with Luna Rossa Prada Pirelli entering course E on port. With the breeze between 8 and 10 knots, Emirates Team New Zealand closed in hard on their stern, and the pre-race wriggle was on.

Both teams sailed high and slow before the start, then turned down parallel to the line, accelerating for a clean start out to the left side after the gun. Luna Rossa Prada Pirelli dug in just behind Emirates Team New Zealand, sailing wide off their windward hip, putting co helmsman Jimmy Spithill and Francesco Bruni in a powerful position after the first tack.

It was close – with plenty of risk involved, but it paid off for the Italians who again sailed high mode, lee bowing Emirates Team New Zealand, and making life hard for Burling, who had to tack away from the Italians bad air, which really set up the race win for Luna Rossa Prada Pirelli.

With a light but relatively stable breeze, the options for the Emirates Team New Zealand were limited, as Luna Rossa Prada Pirelli used all their options out in front staying to the right-hand side of the course always choosing the opportune time to tack on the defenders and continuing to force them back onto a narrow side of the course, which allowed them to relax their cover at the top of leg 1 rounding the first upwind gate 10 seconds ahead.

The boats split on leg 2, both searching for stronger breeze, but conditions remained light and stable minimising any overtaking opportunities and allowing Luna Rossa Prada Pirelli to stretch out a 170-metre lead.

Co helmsman Jimmy Spithill was heard to say, “Let’s just play the phases,” and that is what the lead boat did, giving Emirates Team New Zealand very few options. Burling and his crew ate into the Italians lead, but with no changing lanes it was tough, with Luna Rossa Prada Pirelli wining Race 3 by 37 seconds.

As Luna Rossa Prada Pirelli co helm Francesco Bruni highlighted after the race. “We had our plan, and we executed it well at the start – and from there on we had the opportunity to make them pay at the left boundary – and we did it. It was tough on the first downwind and I had the feeling they closed up, but we kept it calm, waited for our moments and sailed a really clean race.”

For Emirates Team New Zealand skipper Peter Burling, he was solid and upbeat on the result, “We were definitely pretty happy with the performance. It would have been nice to come away with a win, and we thought we didn’t do a bad job off the line. They got a little too much gauge to the right and got a nice lee bow tack and did a good job there, making hard for us to get any shifts and get back into it – and we even had to do a couple of extra manoeuvres, which put us too far behind to catch up.”

Race 4
With Emirates Team New Zealand entering the staring box on port, they again headed out to the boundary, and gybed back in at 1.16 to the gun. Luna Rossa Prada Pirelli following tacked high and looked like they were poised to sail down to engage hard in the pre start.

The renowned aggression of Jimmy Spithill took hold, and as Emirates Team New Zealand slowed, appearing close to falling off their foils at 45 seconds to the gun, Luna Rossa Prada Pirelli went for a hook – and failed. Burling accelerated, got his speed up, nailed the time on distance and started ahead with the Italians to windward very close on their hip. Luna Rossa Prada Pirelli couldn’t survive and were forced away – giving the starting battle to Emirates Team New Zealand.

In between race 3 and 4, you could see the brains trust of the New Zealand team deep in discussion and this is what they were after. In these light conditions the leading boat was in a powerful position to dominate, and Emirates Team New Zealand were not going to slip up. A 50-metre lead on the first leg extended to 140 metres with clear communication from Tuke, Ashby and Burling working well as the breeze started to soften.

With the breeze dropping to between 7-8 knots it was critical not to make any mistakes – and it was the Italians who made an error that cost them dearly. Heading towards the bottom gate in leg 2 they mistimed their foil drop giving up another 20 seconds to the race leader. Recovering from that, the Italians dropped behind to 400 metres on the final upwind and then 680 metres on the final leg. Levelling the score in this intensely fought America’s Cup match, presented by Prada.

As flight controller Blair Tuke commented on Race 4, “We just got off the line slightly better than Race 3 – and managed to get the jump on them. The boat is going really well and managed to extend nicely. In the first race we didn’t get much fresh air – but in race 4 it was great to get in front, and it’s a lot easier without the wind shadows, freeing us to look up the course and pick the shifts on our terms – a really good bounce back from the guys.”

Luna Rossa Prada Pirelli co helms Jimmy Spithill’s comments after the race summed up the light and tricky day, “One-one scoreline today, great racing from both teams – full credit to the Kiwis, they did a nice job in that race and looking forwards to tomorrow!”