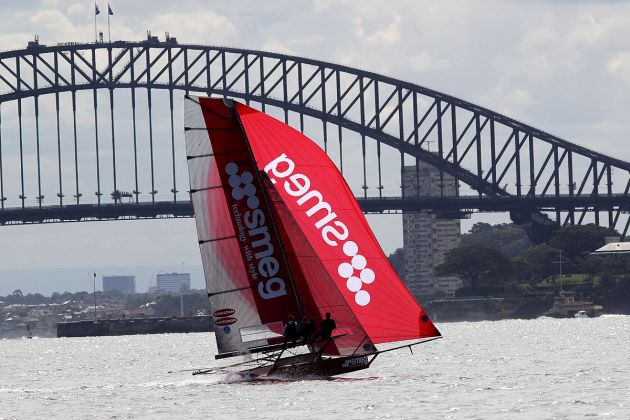 The Smeg team of Lee Knapton, Ricky Bridge and Mike McKensey gave an outstanding performance in extremely tough conditions to dominate Race 2 of the Australian 18ft Skiff Championship on Sydney Harbour today. After trailing in third place for the first two legs of the course, they gave no other team a chance as they powered away in the light, shifty ESE breeze which fully tested all crews as they searched for the best conditions.

It was a long slow day for a number of the more fancied teams as they battled to pick the fluctuating breeze.

The race from the start in Taylor Bay, across the harbour, to the windward mark in Rose Bay was critical and played a big part in what was to follow. The lightweight llve crew, along with the rookie Mojo Wine team and the young Noakes Youth boys elected to sail across to the windward side of the course near Steel Point.

Only Smeg, in the middle of the course, was able to separate the trio when Smeg was third behind Ilve and Mojo Wine as spinnakers were set for the long run down the harbour to Robertson Point. The four skiffs had already established a break over the rest of the fleet while teams such as Gotta Love It 7 (Seve Jarvin), Appliancesonline.com.au and Yandoo (John Winning) were struggling back towards the tail of the fleet.

Racing became much closer behind the leaders at the Clarke Island windward mark where Smeg had grabbed a 25s lead from Mojo Wine and Ilve. Triple M had made a move to be in fourth place, followed by Noakes Youth and Asko Appliances (Marcus Ashley-Jones), which had made a great recovery after a slow first windward leg when the crew elected to sail west of Shark Island and paid a heavy penalty. Lumix (Brett Van Munster) was seventh, followed by Thurlow Fisher Lawyers, The Kitchen Maker (Andrew Chapman) and Coopers 62-Rag & Famish Hotel (Jack Macartney).

As Smeg continually increased her lead, the race for the minor placings was heating up as some of the big guns began to challenge Ilve and Mojo Wines. Despite the challenges, it was a great credit to the two less experienced crews as they repelled their more experienced rivals and showed the overall strength of the Sydney fleet as it prepares for the JJ Giltinan Championship next month.

Race 3 of the Australian Championship will be sailed next Sunday and the Australian 18 Footers League will have a Spectator Ferry, leaving Double Bay Wharf, alongside the clubhouse, at 2.00pm, following all the action. Anyone planning to follow the race on the spectator ferry should make sure that they don’t leave it too late to buy their ticket.  The ferries have been packed for the past few weeks and  some followers missed out last Sunday when the ferry was completely sold out.