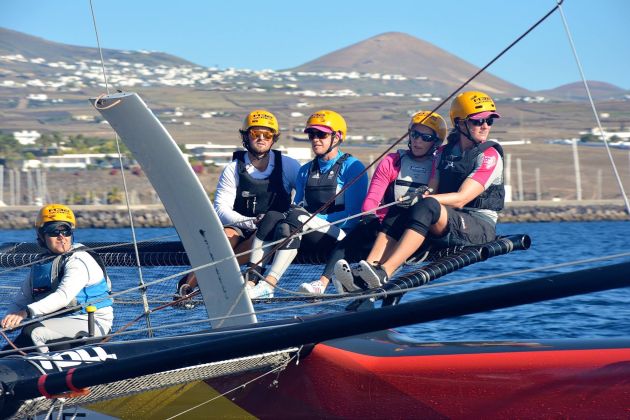 London, UK (17th January 2016): A groundbreaking racing license programme to ensure safety in the 2016 World Match Racing Tour (WMRT) is proving a hit with competitors as they get to grips with the cutting edge M32 catamaran.

Under new rules introduced this season by the World Match Racing Tour, and the first programme of its kind to be introduced to the sport, every sailor racing in a WMRT Tour event is required to complete an intense three-day training clinic and be granted an official M32 Match Racing License.

The licensing programme is designed to teach sailors how to handle and race the high performance M32s, particularly in a close match racing environment similar to the America’s Cup. Importantly, obtaining the license is also a requirement of strict safety and insurance demands placed on competitors to ensure maximum safety levels on the water, particularly including VIP guests who will be given the opportunity to sail on board the M32s during live races.

The 32ft carbon fibre M32s are capable of hitting speeds in excess of 30 knots – up to five times faster than monohull yachts – so a new set of skills is demanded from the sailors to guarantee safety on the water and a thrilling show for spectators.

The licensing clinics, announced in November, are managed by veteran match racer Lars Linger currently based in Lanzarote, Canary Islands until February 10. Clinics will then take place in Fremantle, Australia, on February 13 to 15, 16 to 18 and 19 to 21 ahead of the WMRT season opener in early March.

And already teams are reaping the benefits of the specialised training. The sailors of The Magenta Project, led by American former Olympian Sally Barkow, are among the teams recently granted an M32 license.

Barkow, skipper of the WMRT's first all-female team with a Tour Card, said she and her team have already benefitted from the licensing clinic by finishing second in their first M32 event in Bermuda last week.

“The licensing session was a great experience for us,” said Barkow. “It was invaluable to get a crash course on how to sail the boat and the dos and don’ts. I first sailed an M32 in September 2015 and instantly fell in love with it so I knew a little of what to expect, but for some of the girls it was real eye-opener. The amount of co-ordination and teamwork needed to sail these catamarans is incredible. The work we did with Lars and his team paid off straight away when we got to Bermuda and we could all jump on the boat race competitively straight away.”

As well as the ten Tour Card Holders, any sailor wanting to compete in the Tour qualifying events will need to obtain an M32 Match Racing License.

As Craig Mitchell, WMRT Racing Director, added “For safety purposes all crews competing in World Championship and World Tour events will be required to hold an M32 Match Racing License. We have both sailors who know these boats and those who have never sailed them before, so it’s about making sure everyone knows what to do and what not to do. We will work with each of the teams and create a tailored programme depending on their experience of multihull racing.”

The introduction of the M32 catamaran sees a new direction for the World Match Racing Tour as it transitions to the M32 multihulls for the first time in its 16-year history.

A long-time trimmer for Swedish past America’s Cup skipper Magnus Holmberg, Linger knows the M32 inside out thanks to his time with Klabbe Nylof's Audi Ultra Sailing Team on the M32 Scandinavian Series.

“All of the sailors competing on the WMRT are among the world's best however there is a steep learning curve to go from monohulls to M32s,” said Linger. “The most important thing for us is safety – these are high performance boats and sailors must be prepared for everything. We teach the sailors how to avoid capsizing but, if they do, how to right the boat in a safe manner and how to help a crewman in the event of any incident.”

As well as ensuring safety on the water the licensing sessions also teach crews how to get the very best performance from their boat.

According to Linger, slick teamwork will make the difference between the top and the bottom teams. “We give the sailors a playbook that they can use to learn proven drills and manoeuvres so everyone on-board the boat knows what they're doing and in the safest, most efficient way. The M32 is extremely physical and good team work is vital to be able to sail them quickly.”

The 2016 World Match Racing Tour kicks off in Fremantle near Perth, Australia, from March 2 to 7. The short season for 2016 will consist of six stages with the finale taking place in Marstrand, Sweden, from July 4 to 9.