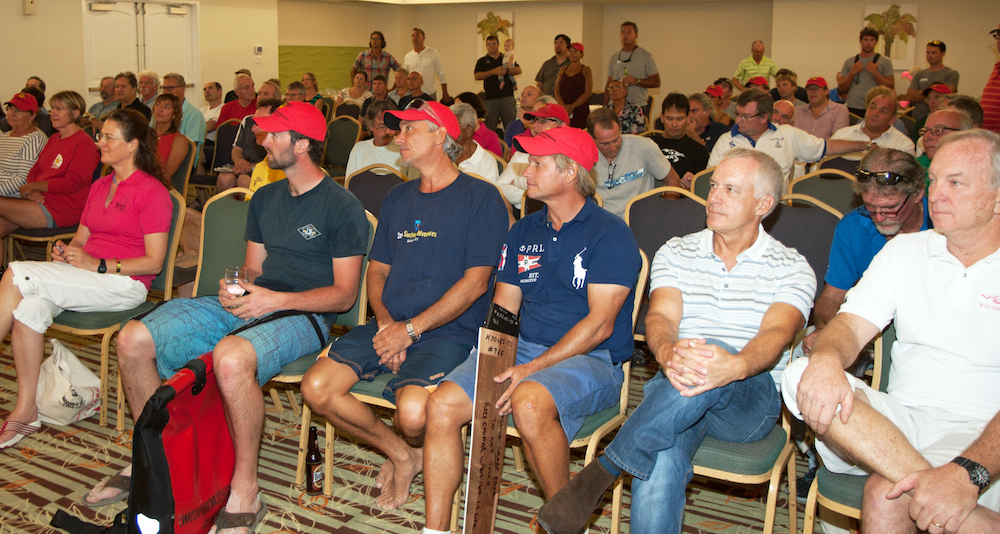 Bridgetown, Barbados (16 January, 2016): With less than 24 hours before the start, a last minute rush has seen a significant boost in entries for the 80th anniversary Mount Gay Round Barbados Race Series. A packed room for the skippers’ briefing headed by Howard Palmer (Chairman of the Race Committee) this evening also endorsed the notion that this Caribbean season opening regatta is a serious contender on the world racing circuit.

Organised by Barbados Cruising Club in association with Barbados Tourism Marketing Inc, and Mount Gay, the Round Barbados Race Series plays an important role in the rich maritime heritage of the island of Barbados. Almost 80 years ago a fleet of trading schooners set sail on their first race around the island. It is now a one of the island’s key sporting events and always produces top class competition with entries ranging from windsurfers to 100ft schooners.

This year is no exception, with some of the world’s fastest racing teams signed up including a couple of MOD 70 trimarans – MS Barbados (Concise 10), and Phaedo3 – plus a host of other top class racing machines including Conviction (TP52), Spirit of Juno (Farr 65), and the 78ft Spanish one off – Ocean Phoenix.

The smaller multihulls are also likely to produce exciting competition with Jack Trigger in Concise12 (Diam 24), and Bryn Palmer (Barbados Cruising Club commodore) on Silver Bullet (RC30), keen to demonstrate their super-fast speeds round the racecourse.

The battle for the windsurfer record in next Thursday’s Mount Gay Round Barbados Race is hotting up too with local sailor Charles Hunt on his Phantom Batwing 377, and Cornic Fabrice on a Fanatic signed up and ready to go.

While the out and out speed machines will undoubtedly produce some of the most exciting, adrenalin-fuelled racing this week, the closest competition is likely to come from the CSA-rated classes, as well as the highly competitive J/24 fleet.

At the other end of the scale there’s a contingent of racing first timers including Jim Rolt who, with his partner Sally Stamford, sailed his 1978-built Contessa 32 Chaos from the UK via the Canary Islands to take part. The pair, who are both singers and performers, have never raced before. Commenting on what attracted them to the event, Rolt said: “I was here two years ago with my boat. I didn’t actually race but had such a great time and the club made me feel extremely welcome, despite my lack of racing skill. I knew I had to come back, so here I am, fully signed up for racing this time. We left the Canary Islands on 20 December and arrived last week. Haven’t the faintest idea about racing but our aim is to have fun and to finish second from last.”

The forecast for the first race of the three-race Coastal Series tomorrow shows 12-14kts of breeze from the east. After what should be a good day of tactical racing off Carlisle Bay Back on shore, competitors and their guests can look forward to the first Post Race Party at Barbados Yacht Club – just along the beach from Barbados Cruising Club.

Geoff Evelyn, commodore of Barbados Yacht Club, who is racing his Beneteau Lantana this week, says although he is looking forward to a great week of racing, he is pleased that the BYC are contributing to the organisation. “Not only is our club offering assistance by providing some of the racing marks, and a team of helpers to lay them, we are also hosting the first party of the week where I am happy to be able to welcome guests.”