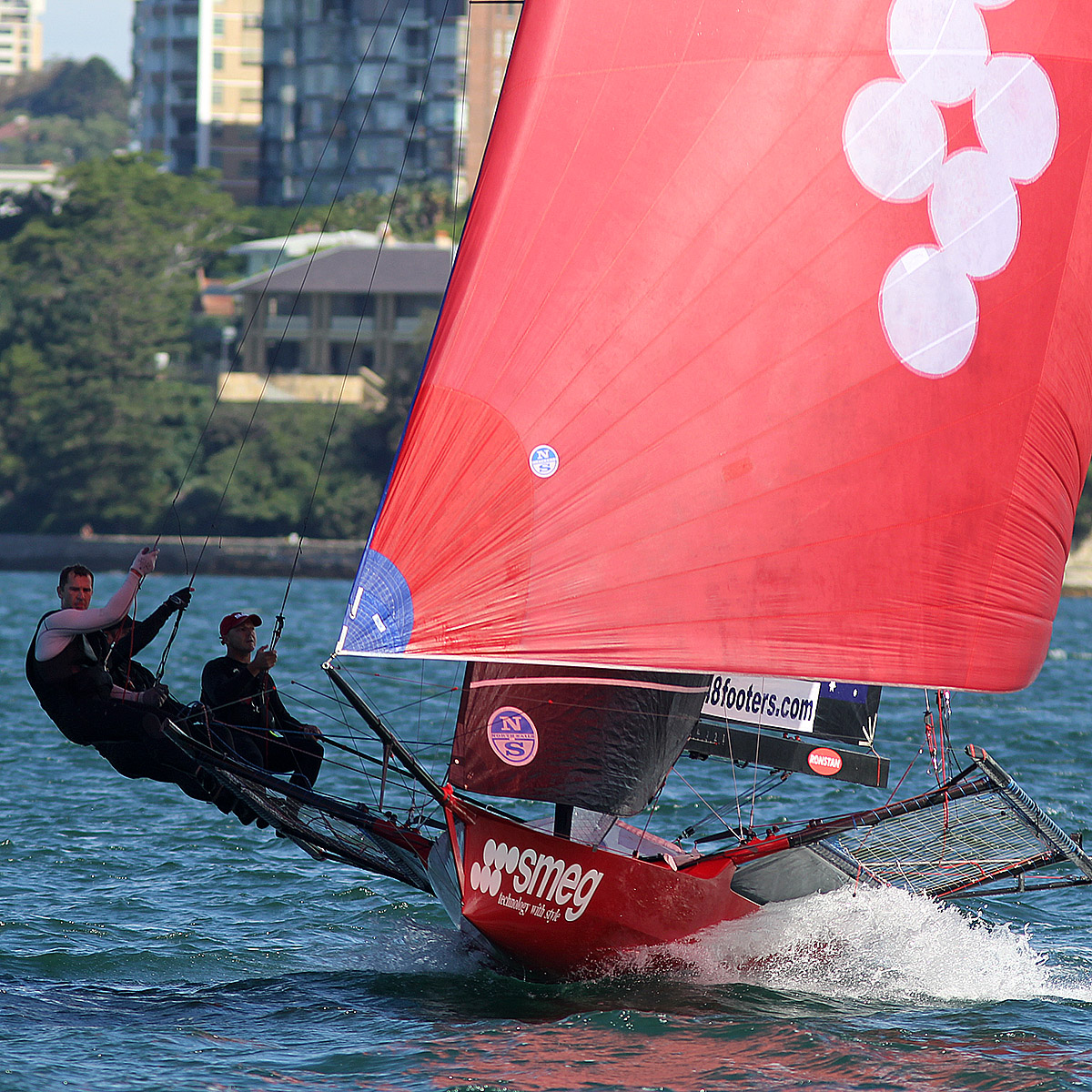 SMEG on the way to a race win at the 2018 JJ Giltinan Championship. Photo Michael Crittenden.

09/03/2018
Australian champion Smeg team were back to their best for the first time in The Winning Group 2018 JJ Giltinan 18ft Skiff Championship when they took points honours of Day 5 racing on Sydney Harbour today.
Lee Knapton, Mike McKensey and Ricky Bridge scored a win in Race 6 and finished second in Race 7 to score three points on the day and move into fourth position overall in the championship.
In Race 6, Smeg took the honours by 12s from New Zealand's C-Tech (Alex Vallings, Sam Trethewey, Matt Coutts), with series leader Maersk Line (Josh Porebski, Jack Simpson, Dave Hazzard) a further 24s back in third place.
In the latter race (Race 7 of the championship), Honda Marine (David McDiarmid, Brad Collins, Matt Steven) took an early lead and were never headed over the ESE windward-return course.
Smeg finished 10s behind Honda Marine, with Maersk Line again finishing in third place, another 10s behind Smeg.
Both New Zealand teams have total points of 19, but allowing for discards (at this time) Maersk Line leads the championship on 14 points, followed by Honda Marine on 15, Asko Appliances (James Dorron) on 30, Smeg 37 and Finport Trade Finance (Keagan York) 37, with another New Zealander, Knight Frank in sixth place on 38 points.
The improved form of Smeg and Asko Appliances could play an important part in the overall winner as every points is critical and each of these two teams is more than capable of finishing on the podium in both races over the weekend.
Day 6 of the JJ Giltinan Championship will be sailed on Sydney Harbour on Saturday, Thursday 10 March.
The final day of the championship will be sailed on Sunday 11 March.
THERE WILL BE TWO SPECTATOR FERRIES FOLLOWING SUNDAY'S RACE
– Frank Quealey