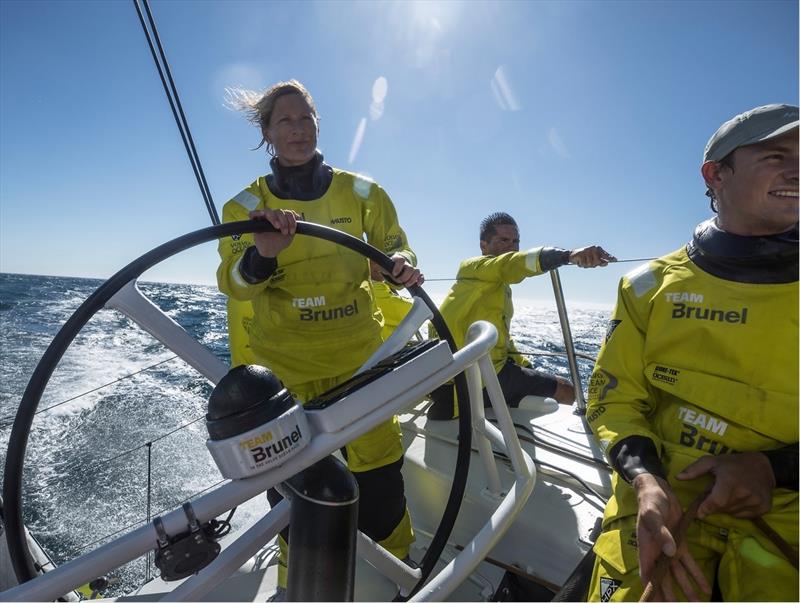 Team Brunel sailor Abby Ehler is currently racing her third edition of the Volvo Ocean Race, having competed as part of Amer Sports Too in 2001-02, and the all-female Team SCA in 2014-15.

On International Women's Day 2018, she organised and co-hosted a landmark event in the Volvo Ocean Race Village in Auckland in front of a packed out crowd.

Here, we catch up with her to find out her motivations in being part of the Magenta Project movement, doing the race for a hat-trick time and leaving a legacy for the next generation.

Abby – what a fantastic event in Auckland – and on International Women's Day too. You must be delighted…

Definitely! It’s been fantastic to see such a turnout and great to be able to cover the full spectrum of females in the race from Leah (Newbold/Fanstone) and Lisa (McDonald) to Carolijn (Brouwer) and Hannah (Diamond) who’s doing her first race. We all have some great stories to tell, and the audience asked some great questions as well. Overall, it was a really memorable evening.

Why is this kind of event so key, not just for inspiring the next generation, but driving the conversation around female participation in the Volvo Ocean Race and other top-level sports?

I think it’s really important. I just said goodbye to a couple of young girls and they said it’s amazing how accessible you guys are making yourselves.

We know we're role models to the younger generation, but sometimes I think we can seem a bit untouchable. They dream of doing this race, and to be able to meet us in person and talk to us, and for us to be able to share our experiences with them, I think that’s what it’s all about, and it's certainly inspiring for a lot of people.

Tell us a bit more about your mission at the Magenta Project and why you felt it was so important to build this event?

In short, the Magenta Project is there to provide opportunities and give inspiration to others. To make it in any sport, you have to dream big and never say no to anything – and sailing is no different. That’s what we’re trying to do – we love what we do, and we love sailing. If we can share that passion, create opportunities and give our experience to those who are coming up, that’s invaluable.

You've been doing the Race for almost two decades – how have you seen female participation and opportunities change over that time?

I think the biggest heartache for me was finishing the race in 2001-02 completely green, but buzzing with excitement and ideas, and not being able to impart that into another race, and put that energy into another project. In fact, it was another 12 years before I had the chance again, and it was such a golden opportunity with Team SCA.

Luckily, here I am again, racing on Team Brunel with the likes of Bouwe Bekking – who is someone I raced against in 2001-02, and yet he’s been there racking up race after race after race ever since, and is now on his eighth. To be able to learn from him and the other experienced guys on board has been a real pull for me. I love this race, I love being offshore – and this is the pinnacle of offshore racing.

The Magenta Project is made possible by the tireless work of many volunteers, many of whom are sailing in this edition of the race. You're all extremely busy professional athletes, and many would ask why you devote so much time and passion to the cause?

The motivation for me personally is not to see that 12 year gap. This is a great race and there is no reason why women and girls can’t compete in it. To keep that progression and momentum is what we’re all about. I want to allow others to do what I’ve been able to do, and make sure we don’t see a similar kind of gap in the future.