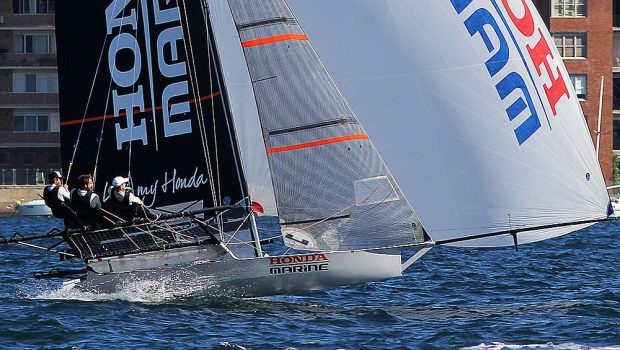 Sunday will be a historic day in JJ Giltinan 18ft Skiff Racing Championship history when a New Zealand team will be the first Kiwi team to win the championship on Sydney Harbour since the first championship regatta was sailed back in 1938.

Finport Trade Finance (Keagan York) finished fourth, with Maersk Line fifth. Only 38s separated the top five boats in a hard fought race over the Easterly course sailed in 9-12-knots of breeze.
Asko Appliances led for the first lap of the course but lost out to Smeg on the second windward beat.

Going into tomorrow’s big clash, Honda Marine holds a two point advantage over Maersk Line but, if each team finishes outside the top five, then discards could change the table.

Whatever happens, there will be a first time champion and the spectators who watch the race will see a great contest, expected to be sailed over the great north-east course.