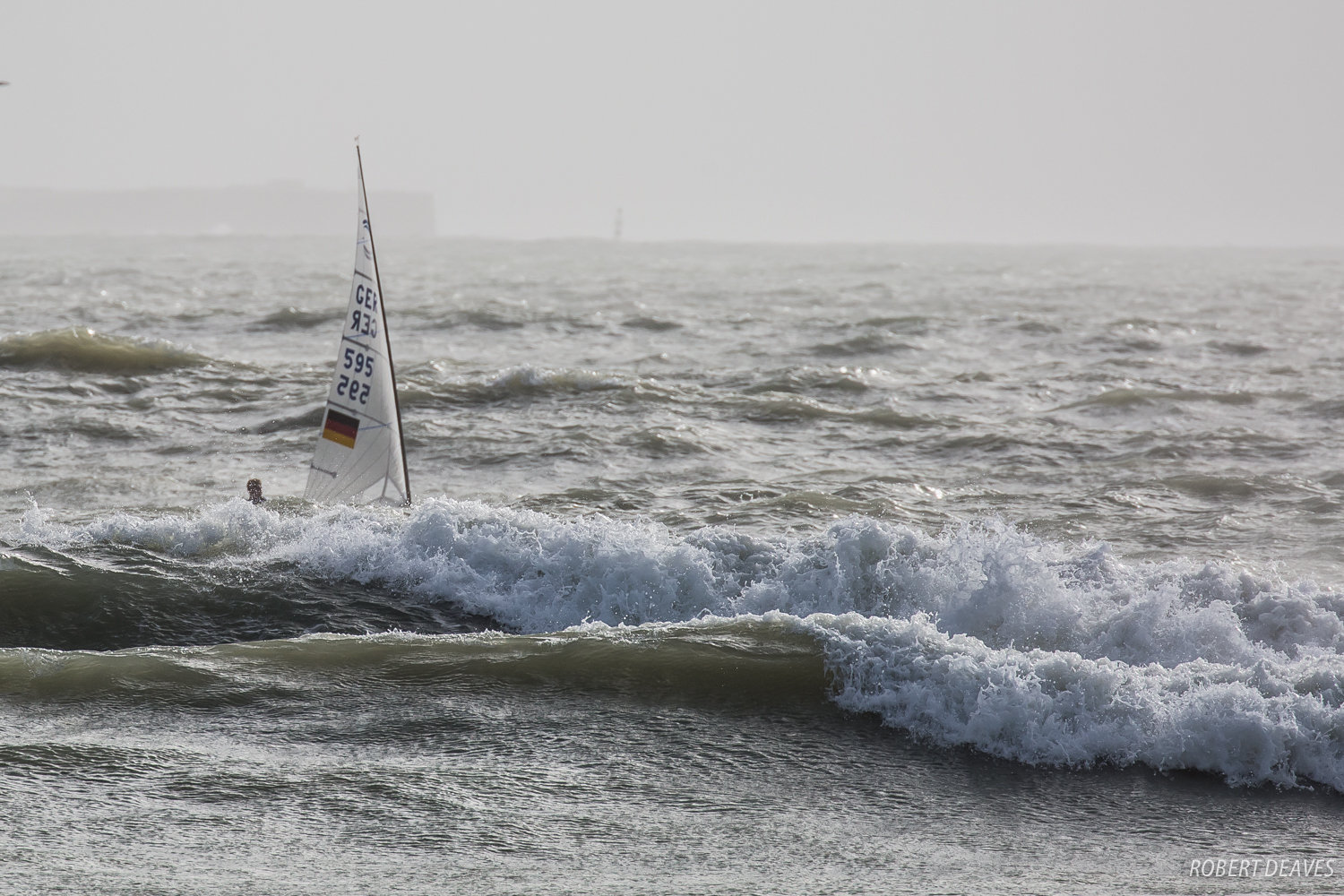 You have to admire the enthusiasm and dedication of Finn sailors. It is a long journey to Cádiz from almost anywhere, but coupled with the extreme bad weather across Europe over the past few weeks, it is nothing short of miraculous that nearly 100 boats and sailors have gathered in this far flung corner of Europe to contest the 2018 Open and U23 Finn European Championships.

One of the Swedish teams thought they had it rough with a 52-hour drive from Uppsala, stopping only to change drivers and top up with gas. But that was relatively benign compared to the four days by Norwegian, Anders Pedersen, who also had to contend with several snow storms, sleeping in the car in -15 degrees in Berlin, picking up a new boat in Poland, and an 11 hour traffic jam in France caused by snow and high winds. He arrived just in time to witness the first ever tornado to strike Puerto Sherry, the damage of which is still evident in the marina.

Rafa Trujillo sold this venue to the fleet on the basis of great winds and great weather, even in March. While the wind conditions so far during training have been exceptional, sometimes they have been too exceptional, and combined with weather normally reserved for Weymouth, it has been a breezy but damp start to the event.

So the championship was opened Saturday evening with almost every kind of weather battering the venue, and another storm raging outside while the sailors enjoyed the Andalusian hospitality inside. The only thing missing so far has been the sunshine, and that has been promised by the start of racing of Monday.

The Opening Ceremony was held at the Puerto Sherry Hotel with brief welcomes followed by a finger buffet and drinks. The sailors were welcomed by Enrique López Bosch, president and CEO of Puerto Sherry, and Francisco Coro, president of the Andalusian Sailing Federation. Snr Coro thanked the sponsors for the event which made the championship possible.

Corinne McKenzie, Executive Director of the International Finn class replied and complemented the organisers on their efficiency and ease of putting together the championship at short notice since September. She also commented that it was good to see a large Spanish Finn fleet in Cádiz, especially a high number of U23 sailors. She then declared the championship open.

Finally the current European Champion, Jonathan Lobert, presented Snr Coro with the European Trophy for safekeeping during the week.

Joking about the weather, he said, “Today was a classic Cadiz weather, a lot of rain, a lot of wind and big waves. This is not what we were expecting. I felt like I was at home in La Rochelle, so I really enjoyed today.”

“I am pleased to bring the trophy back and I will fight hard to have it on my desk again next year and I wish you all a great competition and looking forward to a good fight on the water.”

The fleet here is the most competitive Finn fleet for several years with only a few top sailors missing. They all sail in one fleet, but the U23 European Title will be as hotly contested as the senior title. There are an impressive 33 U23 sailors, making this one of the biggest U23 European Championships for many years.

Measurement concludes Sunday morning before the practice race on Sunday afternoon, though many have already decided not to sail as the forecast is for very strong winds.

The first points race is scheduled for Monday at 11.05.