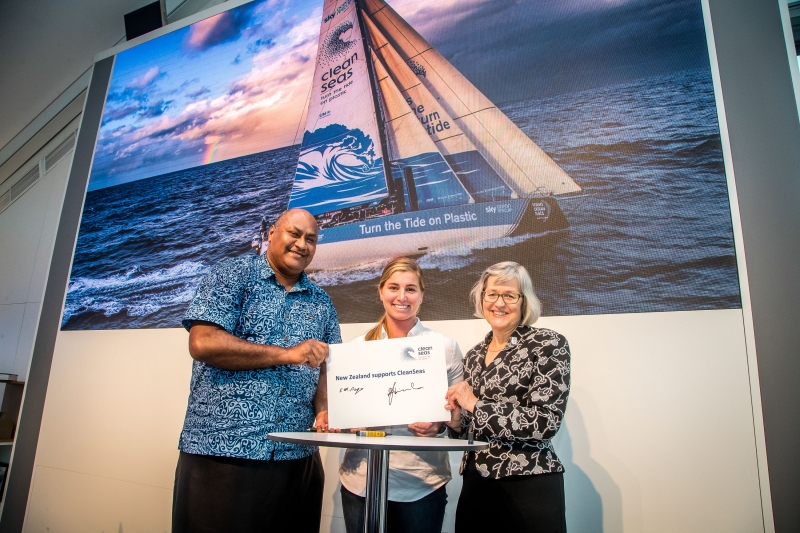 New Zealand has become the latest country to sign up to the United Nations Environment campaign to rid our oceans of plastic.

Associate Environment Minister Eugenie Sage signed up to the campaign, supported by the Volvo Ocean Race, at the Volvo Pavilion in the Race Village in Auckland on Monday.

In doing so, New Zealand became the 42nd country to sign up to the five-year long campaign. Over 70,000 individuals and a wide range of businesses have also pledged to join the fight against marine plastic.

“New Zealand is proud to be joining this campaign to stop plastic polluting our seas,” Ms Sage said.

“Scientists estimate that there are over 150 million tonnes of plastics in the ocean today. If nothing changes then plastic in oceans will weigh more than all the fish that live in them by 2050.

“By signing up to the Clean Seas campaign, we are making it clear that New Zealand wants to be part of the solution to this problem. We are taking steps to prevent litter entering our oceans by hitting it at its source on land.”

At the event, Minister Sage met Kiwi sailor Bianca Cook, from the Turn the Tide on Plastic boat, which promotes the UN's #CleanSeas pledge.

She took a tour of the Turn the Tide on Plastic boat where she was given details of the Volvo Ocean Race Science Programme which is supported by Volvo Cars.

The boat is collecting information on salinity, dissolved CO2, algae and microplastic levels as they travel through some of the world’s remotest oceans.

Sage added: “It’s great to see the Volvo Ocean Race supporting the CleanSeas campaign. We all need to work together to stop plastic going into our oceans. We can all play a part by kicking the plastic bag habit and not buying drinks in plastic bottles.”

Johan Salén, Volvo Ocean Race Co-President, also spoke at the event. He said: “I would like to congratulate the New Zealand Government on joining the United Nations-led Clean Seas campaign to address the impacts plastics are having on our oceans.

“By individuals, businesses, NGOs and governments, such as New Zealand’s, working together we can find innovative solutions to educate, innovate and leave a lasting legacy that will help address this plastic problem.”

“It’s exciting to have New Zealand join us in the fight against marine litter,” Erik Solheim, head of UN Environment said. “By joining the Clean Seas campaign, they are showing great support from a vitally important region and we hope more nations will follow.”

For proud Kiwi Cook, the move by her nation to support her team's campaign is a landmark moment in the fight against plastic.

“I’m really excited and very proud that New Zealand has signed up to the Clean Seas pledge,” she said. “As Kiwis, our oceans are extremely important to us and it’s vital that we keep our marine environment clean. Stopping single-use plastic is essential for ocean health. Thank you New Zealand for taking the pledge.”

The United Nations Environment launched the Clean Seas campaign in February 2017 with the aim of encouraging governments, businesses and individuals to join the fight against marine plastic litter.

Stuart Templar, Director of Sustainability at Volvo Car Group, said: “It's great news that New Zealand is joining the fight against plastic pollution. The Volvo Ocean Race is not only being used to draw attention to this global problem, but also galvanise action to tackle it. That’s why Volvo Cars is proud to support the ground-breaking Volvo Ocean Race Science Programme.”

Todd McGuire, Programme Director of 11th Hour Racing, Founding Partner of the Volvo Ocean Race's Sustainability Programme, said: “This is a very exciting time for NZ to sign the Clean Seas pledge. When 11th Hour Racing became a Sustainability Partner of the Race, it was all about impact – and to see the impact as the Race goes around the world is exactly what we're here for.”

Measures the New Zealand government is taking to reduce the country’s plastic footprint include: