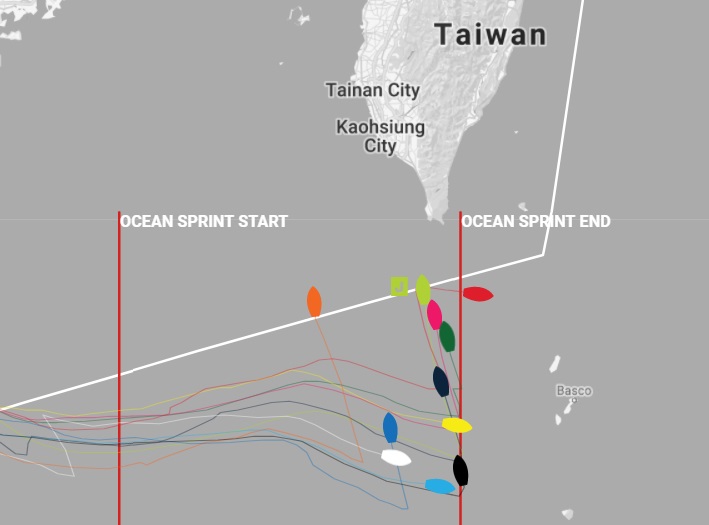 It’s been another tough day and night at the office for the Clipper Race fleet as the teams have struggled to complete the Elliot Brown Ocean Sprint in strong headwinds and big waves, with some choosing to sacrifice bonus points for overall race position.

PSP Logistics retains its lead today in Race 8: The Sailing City Qingdao Cup, but skipper Matt Mitchell explains that the team had to make some tactical decisions after experiencing some rough conditions, saying: “Half the boat was still underwater on the back of the waves. We really struggled to get good boat speed too so we lost some ground overnight. Didn't help that we had masses of current against us!

“So, in an attempt to open up a gap we decided to sack off the Elliot Brown Ocean Sprint and focus on position for the race overall by tacking up to get out of the worst of the foul current. Our speed over ground went from 5 knots to 11 knots which has helped to give us a real push.”

As of the latest position update, Liverpool 2018 is currently showing in second place after tacking north following the conclusion of the Elliot Brown Ocean Sprint. Skipper Lance Shepherd describes some close match-racing with fourth-placed Visit Seattle, reporting: “We have been sailing with three reefs and our Yankee 3, slogging it out with skipper Nikki to get to the end of the Elliot Brown Ocean Sprint.

“We were against some strong headwinds, an adverse current and some waves that I can only describe as rude! (Come out of nowhere, spin you around and then drop you off a cliff!!)”

The Sanya Serenity Coast team, which has also tacked north, is now in third place, does not hold high hopes for the sprint results, as skipper Wendy Tuck reports: “We don’t like our chances on the Elliot Brown Ocean Sprint.

Though as the boats that started after us had much nicer conditions. Like everyone else we have been bashing away to windward. It should start easing later today if you believe what you read – will have to wait and see.”

Further south, and just over 40nm behind the race leader, is GREAT Britain which has also now tacked north after reaching the end gate but Skipper David Hartshorn revealed this morning that the sprint did not go completely according to plan either. He says: “It would appear you can easily go in completely the opposite direction to the way point for nearly four miles before realising it, but on a positive note we hit our best boat speed for that time, 11 knots!”

Continuing its climb up the leaderboard, Qingdao is now in sixth position and the team is persisting with the sprint as is Garmin skipper Gaetan Thomas, who sounds more positive today as his team are now in seventh position.

He says: “Here we are upwind in 30 to 45 knots of wind in a choppy and confused sea. My pirates (Garmin crew) are coping quite well with the conditions, and we are giving our best to get some points through the Elliot Brown Ocean Sprint, which I believe will be a close one – we need those points!”

Unicef in eighth and Hotelplanner.com in ninth have however tacked north early in search of the shorter mileage to Qingdao and HotelPlanner.com skipper Conall Morrison explains: “Last night we were still in close company with Garmin and Unicef but we have gone separate ways today.

“The sea state is still very challenging and we have opted to tack north to make a better course towards the next waypoint rather than push for a good Elliot Brown Ocean Sprint time which had been our original plan.”

Fighting for position at the back of the fleet is Dare To Lead, in tenth, and Nasdaq, in eleventh, with the latter’s skipper Rob Graham perhaps best describing the conditions over the last 24 hours.

“Like jet pilots or astronauts training in a centrifuge, gravity becomes exaggerated under these conditions and simple everyday tasks require some serious balance and willpower to complete” he says. “Getting out of a low-side bunk is as hard as not falling out of one on the high-side; dressing oneself is a feat of agility.”

The teams are looking forward to a flatter boat and the Clipper Race Meteorologist, Simon Rowell, has some good news reporting that the conditions are at their strongest now but should start to ease in the next 6-12 hours, Looking ahead, things should get much better after about 36 hours, with the high-pressure system coming off China giving the teams favourable and lighter winds for the next two or three days.

Keep up to date with the latest progress of the Clipper Race fleet via the Race Viewer and you can also hear more from the skippers and crew on the Team Pages.

The eleven Clipper Race teams are expected to complete the 1,700 nautical mile Race 8: The Sailing City Qingdao Cup between 13 – 16 March 2018.

This will be the seventh time the Clipper Race has included Qingdao as a Host Port on its global racing route, with the city the longest serving Host Port Partner of the race. For the first time, Clipper Race crews will berth at the newly constructed Wanda Yacht Club, a state of the art facility in western Qingdao.