In 1984 I wrote some articles in Australian Sailing that blew the lid off the misconceptions that were held about sailing in current. Up until that time everything that had been written about how current affected your wind and sailing angles had been based on feelings and false conclusions based on some observations. Much of what was written in the articles by world and Olympic champions and by all the so called technical experts was wrong. I proved them wrong mathematically. There are no flaws in my logic and there are no mystical effects. I simply showed the undisputable mathematical facts.

After my articles were published one of the technical experts wrote an article bringing his thoughts into line with everything that I proved but no one has expanded on the material that I presented. I am amazed that the concepts that I proved have not been explored further nor written about since. What this means is that just about all the sailors out there still have no idea of how current really affects yachts save for the few Olympic sailors that I have coached or those who have read my articles.

Many have written about how laylines are affected by current so I will not bore you with that here. I will however present some great strategic moves you can plan, that have not been explored before. We will be using vector diagrams but you will not have to be a maths expert to understand what is going on.

Over the years there have been many misconceptions about how current affects us when we are racing. It is a well known fact that current runs faster in deep water so you should sail towards the deep water when it is favourable and towards shallow water in unfavourable current. This will get you by in many situations. How far you commit to the side with more favourable current depends on how strong it is in relationship to the breeze, the size of the shifts and which way the fleet goes.

How does current affect the wind we are sailing in?

If there are a number of boats sitting on the water when there is no wind but current running at two knots from the west they will all feel two knots of current wind (CW) from the east no matter which direction they are pointing. This introduces two important concepts, all boats in the same current are affected equally, independent of their heading and that the wind felt when you are in current is equal in strength and opposite in direction to the current.

Now when there is also a true wind (from the north in figure 1) it is possible to determine the breeze that will be felt by all the boats on the water by adding the true wind (TW) and current wind (CW) vectors together. (See Figure 1.) The diagrams below are called vector diagrams.

When the current is stronger or the breeze is lighter the resultant wind is rotated more. Figure 2. shows that when the true breeze of 15 knots drops to 8 knots that the resultant wind is veered a further 6 degrees. This means that if you were sailing upwind with current running across the breeze and the breeze dies that the boats down current would be on the inside of the shift and therefore advantaged. (Current is still running from left to right in figure 2.)

This is an important concept when all other factors are equal boats down current in stronger current or less breeze will be on the inside of the shift. All other factors being equal means you cannot sail into more favourable current or pressure by going the other way.

Draw your own Vector Diagrams

Now if you do not understand how the vector diagrams work I will explain it clearly to you here. To figure out how the wind will be affected in any situation simply draw a line on a page representing the wind. If the wind is 15 knots as in Figure 2 make the line 15cm (inches or any other measurement long). Put an arrow on the end to show the direction. Draw the current wind on the page. Start the tail of it at the head of the true wind and draw it in the opposite direction to the current and make the length to represent the strength. If it is 2knots make it 2cm (or 2 of the same measurement as the wind) long. Put the arrow head on the end of it. Remember the current wind is equal in strength and opposite in direction to the current.

There is no leebow effect.The boats simply move with the current and the breeze is rotated by the current as described above. The basis for this misconception is that during a beat against current , a boat that points higher than another will open up more ground (gauge) than on a beat with no current. The reason for this is not the leebow effect but the fact that the boats will take more time to sail to windward than if there were no current. The only advantage you can gain is that if by sailing high against adverse current you can sail into less or no current you will gain on a boat sailing lower in the current. If this is the case then both boats should have tacked into the slack current any way. The resultant wind is the wind you feel on the water when floating with the current!

When the wind or current change strength

When you are sailing downwind you want to sail on the knocks not the lifts so you should: Sail the tack with the current when the current is strongest or the wind lightest. When the breeze is stronger or current weakest sail more directly into the current. See figures 5 and 6. If you are unsure of this then draw the vector diagrams of what you expect to determine which way to go.

It is important to be aware that the upwind and downwind laylines change enormously when there is current and that if you sail the tack with the current you will get to the layline much sooner than under normal circumstances. As a general rule if the breeze is dying and the current is pushing you towards the mark, sail back to the rhumb line so you do not get taken past the mark too far away from it.

The Starting Line with Cross Current

It is impossible for the Race Committee to set a line square to the wind the competitors are feeling if there is current running across the line unless they do one of the three following things.

Do you think they will do any of that? It’s not likely. They don’t know any of this stuff. So before you look at the next figure which end will be favoured, up current or down current ? 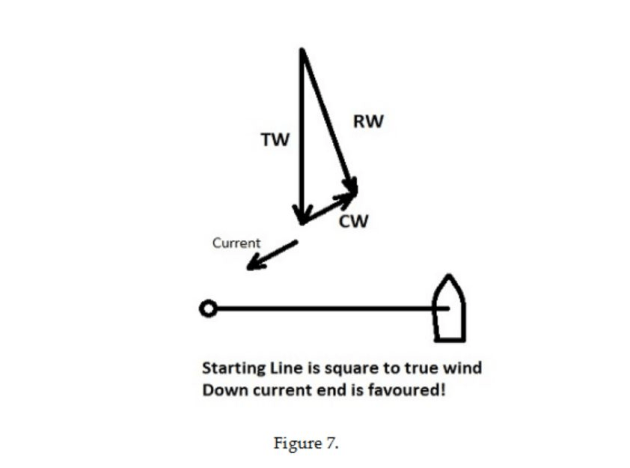 There is no advantage in being up current

Given that you are in uniform current and the boat up current cannot sail out of adverse current there is no advantage up or down current. Lets think about it. Assuming we are beating to windward, if there were no current the boat upwind has the advantage.

Now if we add the current both boats are affected equally. The boats move with the current and the current wind rotates the breeze. The boat up current is not on a magical piece of water that takes them upwind quicker than the water under the boat down current. The only advantage is being upwind, no magic is involved.

Following are a couple of example of how I have used my knowledge of what the current does to the breeze for my strategic advantage. You may have similar circumstances where you sail.

There was no current at starting line but 100 metres upwind there was a strong current running across the course from right to left. Most of the fleet tacked off to the right after the start to try and stay out of the current longer as they thought it was adverse, not across the course.

After sailing for a minute or so on starboard tack a couple of other boats and I sailed into the current and were knocked by it. We tacked onto port to weather of the fleet with a lead of nearly a minute. See Figure 8. 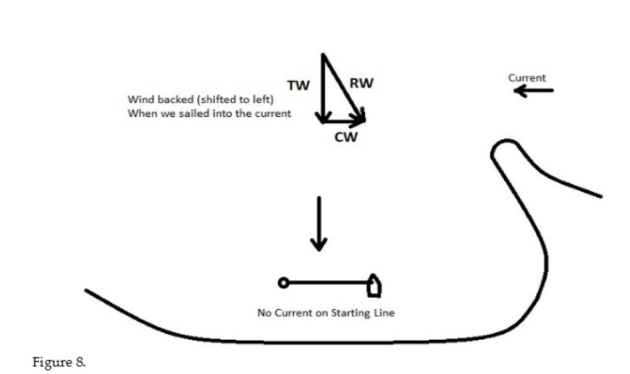 Now if the current had been a little adverse the shift would have still made it worthwhile to get into it down current and on the inside of the shift. However there would obviously be a cut off point when it would be worthwhile to stay out of the adverse current for longer. To determine this you would have to sail upwind on opposite tacks with a buddy and tack back when you got in the current and see who crossed in front.

If you sail on Sydney Harbour in a Noreaster when there is an ebb tide you can sail from relatively slack water on the eastern side of the harbour into the western channel where the current is quite strong. There have been many times when I have sailed into the current on starboard tack, which pushes you upwind, and boats around me have tacked out of it because the resultant wind is a knock. See Figure 9. I have happily taken the ride upwind offered by the current and kept on sailing on starboard as the true wind had not shifted. When I tack onto port tack on the inside of the shift created by the resultant wind I have also been taken 100 metres to weather by the current. Not much chance of seeing the boats that tacked off again in that race.

There is nothing mystical about sailing in current. There is no situation which cannot be explained. If you use commonsense and the information in this article you will be able to find the fastest way upwind or downwind in current. One thing to always keep in mind is that current changes the laylines, so be careful not to overlay.

Sailing is a percentage game, nothing is certain to happen. The breeze, current and other factors which affect us are not always predictable. The best sailors pick a course which will give them an advantage over the majority of the fleet if the expected happens but will not leave them out on a limb if the unexpected happens. Knowing a bit more about how to use the current stategically is one more way you can gain an advantage over your opposition.

About the author: Andrew “Yorky” York.

Andrew York has competed at the top level nationally and internationally in half a dozen one design classes since the late 70’s. He has served on a number of class committees and has had numerous articles on tactics, tuning and increasing performance published in Australian Sailing magazine since the early 80’s.

For the last six years Yorky has focussed on building the VX One Class in Australia. His experience in this class has sparked his desire to design a potent sports boat. His prototype the REO 7.2 won the ASBA Nationals last year and has beaten many much larger boats off the stick. The one design development, the REO 7.7 is just about to start production.  For more information go to https://www.reosportsboats.com/