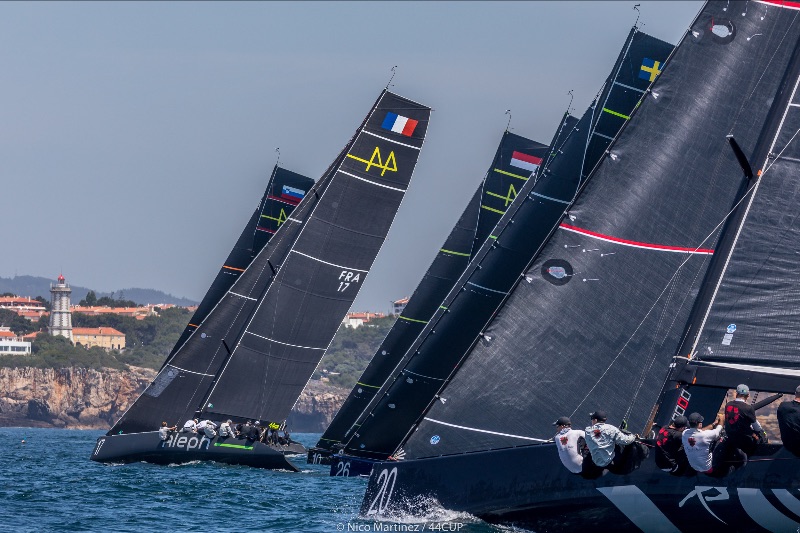 Seven teams will compete in the regatta. Pic - Nico Martinez/44Cup

Portugal: Igor Lah, tactician Adrian Stead and their CEEREF powered by Hrastnik 1860 are the team with the biggest target on their back going into the 44Cup Cascais, which sets sail tomorrow.

In early February the Slovenian team won the opening event of the 2022 44Cup in Puerto Calero, Lanzarote by a slender margin but a margin that nonetheless sees the 44Cup leader’s golden steering wheels sparkling welcomely aboard their high performance one design keelboat.

This is not the first time that Lah has been in pole position having won the 44Cup overall in both 2017 and 2019. However, his team’s track record racing at the Portugese sailing mecca is mixed.

“The golden wheels – they have a nice grip, and we will of course try and keep them, but it is a very competitive class,” states Lah. Does he feel more threatened when his boat has its special ‘bling’? Not especially: “Everyone is still attacking everyone – everyone is playing their own game. Maybe the last day there are some more ‘tactics’, but everyone can win races. I am happy with the crew, and I look forward to continuing what we are doing.”

Team CEEREF had a miserable time here in 2019 and before that had a string of frustrating second placed finishes. Despite this, Lah says: “It is brilliant, incredible – I really like the scenery here. The weather is perfect. There is no more corona (fingers crossed). I really enjoyed the conditions for today’s practice race. Hopefully it will stay that way for the week.”

Chris Bake’s Team Aqua got off to a difficult start to this 2022 season, finishing fifth in Lanzarote but is certain to be strong this week given that they are the defending champions, having won here when the 44Cup Cascais last took place in 2019.

But they are not the only team present to have previously lifted the 44Cup Cascais trophy. Torbjörn Törnqvist’s Artemis Racing won in 2016 and in an attempt to try and improve his team’s chances was on board for today’s practice racing. “Cascais is definitely one of my favourites venues,” said Törnqvist. “It is nice to be here sailing. It is always warm with good breeze – what more can you ask for?”

As for today’s practicing racing, he added: “I decided that I wanted to do a bit more to get a better feel for it. We were saying that we managed to tick off all of the mistakes today – so we got stuck at the top mark, etc which in fact it is good to do, because it sharpens you up!”

While most of the RC44 crews are seasoned veterans of the class and of Cascais, one who surprisingly isn’t is Giles Scott, the double Olympic Finn gold medallist turned America’s Cup tactician. The last time he raced in Cascais was 2007, his debut year in the Finn. “I don’t know this venue so well, but it is pretty readable,” admits the Brit. “There are certainly intricacies to it. Everyone loosely knows that is going on, but it isn’t that straightforward.”

Still relatively new to the RC44 and the class, Scott is still acclimatising, as demonstrated by what should have been a good result in Lanzarote but ended up a disappointing sixth. “We were pretty frustrated with that because it felt like we had clutched ‘defeat from the jaws of a good result’. We were in the mix and fighting for a podium spot in that last race and we got a penalty at the last mark and made a few errors – we were sailing well but we just came out the wrong side in this super-tight racing.”

Even newer is the Black Star Sailing Team of Christian Zuerrer. The new Swiss owner is not only racing his first 44Cup event this week (aboard the class’ own RC44 charter boat) but this is his first time ever racing in Cascais and his first time racing a yacht with wheels. Today’s practice racing was only his fifth day sailing the speedy monohull.

“It is great sailing,” said Zuerrer. “The first two or three days we just had to get it together as a team, find out how to sail the boat and do our manoeuvres properly, etc. So, it has been great since then to race against other teams and see how close the line-up is.”

Zuerrer also campaigns a GC32 foiling catamaran, so the adrenalin rush is a little different on the RC44 monohull. “You have more time to think about things – it is not so fast. But I like the one design class with everyone having the same speed, so it then comes down to crew work.”

While Zuerrer is taking the opportunity try and help nurture young Swiss sailing talent, the majority of his crew, that includes Flavio Marazzi, the Swiss Olympic Star sailing legend on mainsheet, are new to the RC44. The exception is Kiwi tactician/coach Cameron Dunn who brings vast experience with him. “Employing him was the best choice I’ve made,” admits Zuerrer. “He has a lot of experience and is a nice guy and he can teach our young guys.”

Racing starts tomorrow with a first warning signal at 1200.  Follow the racing live at www.44Cup.org