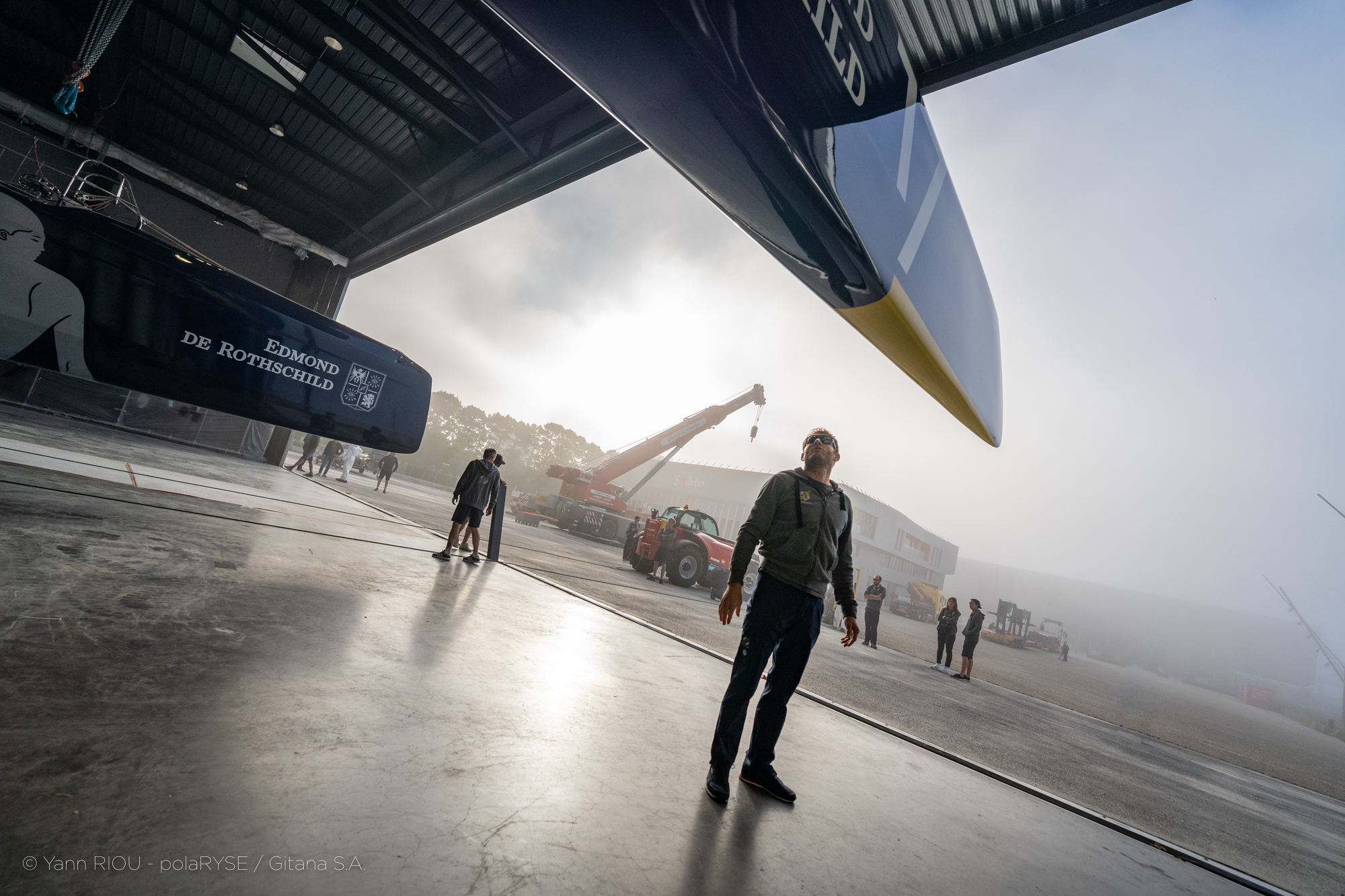 Early yesterday morning, the large doors to the Gitana shed were opened to release the Maxi Edmond de Rothschild from her five-month refit.

Enjoying a ringside seat, her skipper, Charles Caudrelier, looked on attentively, though his mind is already geared towards the open ocean and the Route du Rhum – Destination Guadeloupe, the major meet in the team’s 2022 race schedule. For its 12th edition, the legendary transatlantic race between St Malo and Pointe-à-Pitre, due to set sail on 6 November, is booked out with an unprecedented line-up of over 138 sailors.

The five-arrow giant will be one of the eight pretenders in the Ultim category. In the run-up to the event, the winner of the 2004 Solitaire du Figaro plans to get as much time on the water as possible to develop his automatic reflexes as a solo sailor so he can post the best possible performance in November. The Rhum may well be a singlehanded race, but it is as a team, with a particularly strong entourage, that Charles Caudrelier intends to raise his game over the coming months.

Fresh organisation for the Rhum

“This is the fourth launch I’ve experienced as skipper of Gitana, but this one’s a bit special”, admitted Charles Caudrelier.Indeed this 2022 sports season, the high point of which will unquestionably be the legendary Route du Rhum, marks a change of organisation for the five-arrow racing stable and opens a whole new chapter in the Maxi Edmond de Rothschild story. In 2019, the decision to have a duo at the helm of the 32-metre giant was much talked about.

However, this bold gamble has proven to be a pertinent choice; for three seasons, from 2019 to 2021, Franck Cammas and Charles Caudrelier have virtually won it all in both double-handed and crewed configuration: Rolex Fastnet, Brest Atlantiques, Drheam Cup, Transat Jacques Vabre.

Five victories out of the six races contested! In early 2022, in light of the upcoming ‘solo’ programme, Franck Cammas was keen to develop his status within Gitana Team to invest his time and energy on other craft.

As such, he has become a consultant for Gitana Team and will provide technical support to Charles for his Rhum preparation, but the sailor of the decade will no longer share the helm with his partner.

“It’s a major change and I’m effectively losing a very valuable co-skipper in Franck. He won’t be very far away though and will provide support onshore and at sea throughout my preparation. His massive amount of experience and his extensive multihull knowledge will be precious assets. In 2010, I routed him for his victory so I hope the roles will be reversed this year. The Route du Rhum is the challenge that has kept running through my head since my arrival within Gitana Team.

“This race is the equivalent of our Olympic Games on a multihull. The major double-handed races have been perfect training because sailing as a duo is essentially part-time singlehanded sailing. But I’m really looking forward to rediscovering the singlehanded format as I’m particularly fond of it. On a multihull, it’s the skipper who really makes a difference. It’s down to me to find the best combination so I can set the bar as high as possible in six months’ time.

“I need to get out sailing, link together sessions out on the water in false solo and then alone over two days, four days. My overriding emotion is one of eagerness and excitement rather than stress. The Route du Rhum is a dream come true for me and I’ve been working towards this for over three years.”

Within the pool of talent gathered together in Gitana’s Jules Verne crew, Charles Caudrelier has put together a set of top-flight guardians to ensure he leaves nothing to chance in his preparation. A member of the crew early on and someone cherished for his unrivalled feel for the helm and his shrewd acumen when it comes to getting the boat slipping along, Morgan Lagravière will be stepping up his presence within the team henceforth.

Training partner to Charles Caudrelier, he will be his replacement skipper for the Route du Rhum. Erwan Israël, a trusted crewman and a genius router (in tandem with Stan Honey, editor’s note) in the last victorious Transat Jacques Vabre with the duo Cammas – Caudrelier, will perform the same role in the Route du Rhum, as well as being in charge of the performance analysis year-round, which is such a crucial post on this type of machine.

Naturally, David Boileau, boat captain on the Maxi and a key piece in the jigsaw, as well as Yann Riou, the media crew who needs no introduction, will complete the set-up.

“The boat was in refit for five months because during my return from Fort-de-France in solo format we unfortunately damaged the centreboard and lost our skate wing in a collision. The winter months have been put to good use to carry out a thorough check of the platform, its various systems and all the appendages, which make up Gitana 17’s underwater artillery.

“Every possible element has been dismantled, checked, cleaned and changed where there was wear or damage. That’s part and parcel of a winter refit, but it’s vital in terms of reliability,” explained the skipper. “The appendages – the manufacture of new ones, the repair of the old ones to provide spare parts – has also been a major part of this 2022 refit.

“To the naked eye, nothing spectacular has gone on, but the level of maturity of the platform and the team in its understanding of the boat have enabled us to go into every detail in great depth. It’s these details which make a difference.

“With the Maxi Edmond de Rothschild, we’re constantly evolving! At Gitana, we’ve always dared to take things to the next level, and I believe that it’s this boldness, which has enabled us to keep a few steps ahead of the game in certain areas. The competition is fierce, which is highly motivating, and it certainly has more potential for development than us today. However, our technical maturity and experience on this boat will hopefully be our strengths.”

In accordance with the original specifications, the Verdier design cockpit has been devised and designed for singlehanded and crewed racing, which is a definite advantage when it comes to switching from one mode to the other in a matter of weeks. As such, the only new element aboard is a solo seat specially manufactured and moulded for Charles Caudrelier.

In solo configurations, it’ll replace the second pedestal and enable the sailor to helm, trim and keep watch, snug at the very centre of the cockpit. This gain in comfort is bound to transform into a gain in performance.

“A huge amount of work has gone into the autopilot with our in-house electronics engineer, Nicolas Le Griguer, and the Pixel sur Mer teams, with whom we’ve been working exclusively on these very specialised aspects since the Maxi was created. It will be helming for 99 per cent of the Rhum, so it’s an ally which cannot be overlooked,” mused Charles Caudrelier.

Finally, a brand-new sail wardrobe will adorn the Maxi Edmond de Rothschild. This new addition will accompany a change of style or rather an evolution in the warrior livery devised by the American street artist Cleon Peterson in 2017.

After a few test sails to give the boat a shakedown at the start of the season, Charles Caudrelier will quickly head offshore and get as much time on the water as he can in shorthanded and solo format. Indeed, the skipper must complete his qualification for the Rhum, which equates to a total of 1,200 consecutive miles in solo configuration.

Two crewed races are then lined up for the team in July, which will serve as the perfect dress rehearsal for the group of six sailors who will set sail on the quest for the Jules Verne Trophy at the end of the year. From late summer onwards, the game plan will involve a steady work-up for the major meeting in Saint Malo, which is already on everyone’s minds.

On 6 November 2022, Charles Caudrelier will take the start of the legendary Route du Rhum. Despite a whole string of accolades from a career spanning over 20 years, which is as abundant as it is varied, punctuated by a slew of prestigious victories in both singlehanded and crewed format, on monohulls and multihulls, in France and internationally, the native of Beg-Meil will be competing in his very first Route du Rhum.

A rookie in the very closed circle of skippers of flying Ultim maxi-trimarans! At the helm of the Maxi Edmond de Rothschild, a pioneer of this new generation and one of the most honed boats of the fleet, Charles Caudrelier will be the man to beat. A status which he assumes without qualms and a major meeting, a lifelong ambition in his words, which he is approaching with relish and determination.