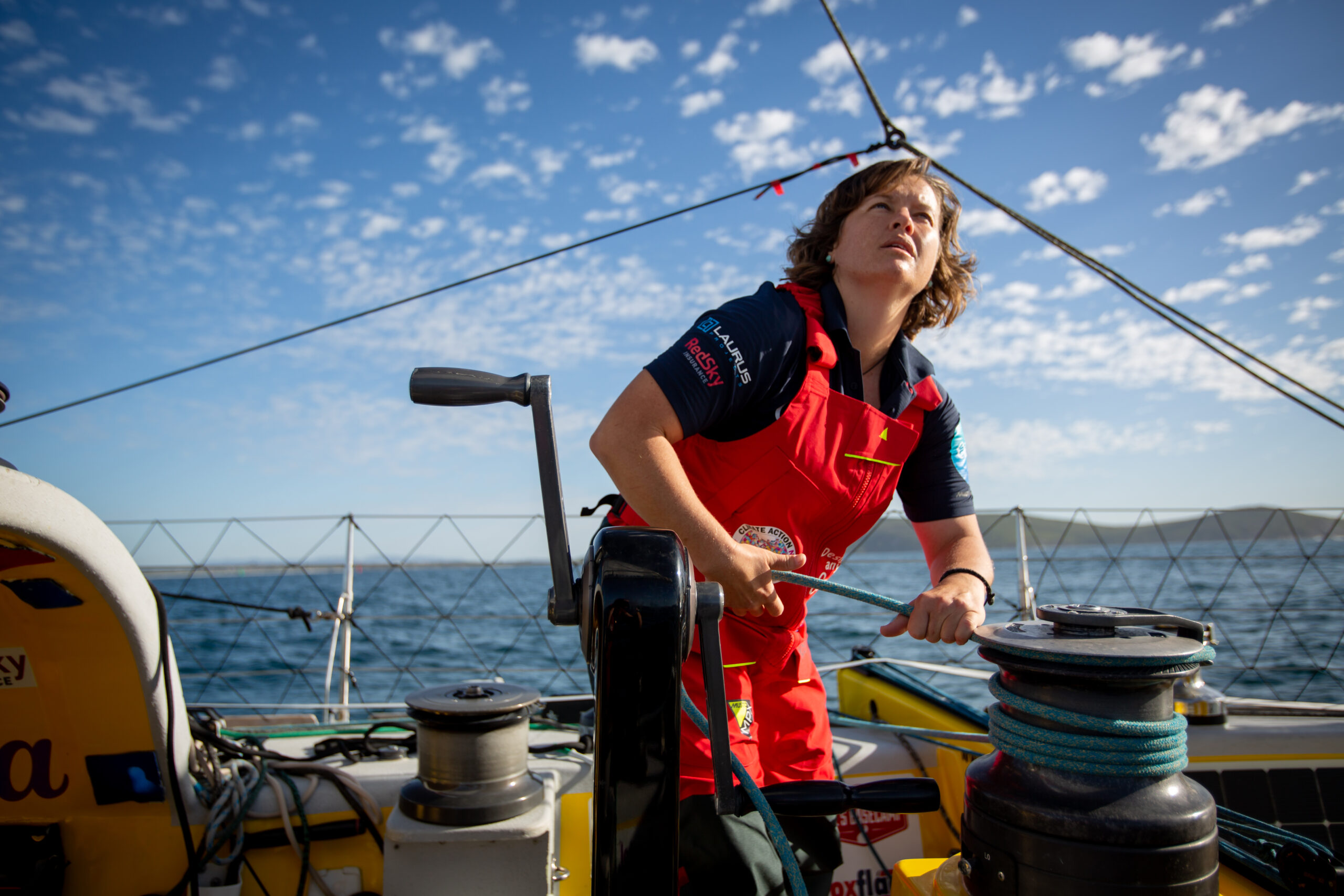 In her latest blog post, Blair is frustrated by the large swell and oscillating wind strength. She also looks forward to a mid to late May ETA in Albany, WA.

Well today has been a busy day but one filled with frustrations. The winds have been all over the place in strength making it nearly impossible to have a good sail plan. By 10am the winds were jumping from eight knots to 25 knots and everything in between.

Every time I would look at the winds it would be at eight or 10 knots and poor Climate Action Now would be rolling around in the swell going a rapid speed of three knots. But after watching the conditions for the allotted ‘cup of tea’ time I would begin to get my life jacket on, and we would be back in a peak at 25 knots or more. And I would be stuck having to wait again. After hours of this I gave up and just left it with the two reefs in the mainsail and the No 2 jib and decided to take advantage of the flatter boat to get some jobs done.

I needed to deploy another weather drifter buoy for the Bureau of Meteorology, so I got kitted up in the early afternoon and went on deck to sort this.  I was surprised to see that the ocean was this choppy three metre swell that didn’t have a real direction. From inside the boat, it didn’t feel like there was enough wind to kick up such a swell but as I looked around it was clear that there was.

The temperature was back to being really cold, so I didn’t wish to be on deck longer than needed, so I jumped into the lazarette compartment and unlashed the drifter buoy. These drifter buoys last for two years drifting around the ocean’s currents sending back sea surface temperature, barometric pressure, and as they drift with a drogue, they are used to map the ocean currents.

You also might remember that I have been dedicating the drifter buoys after different sailors who have influenced my sailing career. This buoy is dedicated to David Lewis.  David wrote a wonderful story called Ice Bird and 10 years ago I read it. He tells the story of when he tried to sail solo around Antarctica in his little 30-foot steel yacht called Ice Bird. His yacht had a wooden cabin top. Within the first storm this was impacted so hard that he needed to re-caulk it, the next storm dismasted him.

He built a jury rig only to have the next storm tear it down. He built another jury rig and lost this as well a few days later.  Finally, the third jury rig lasted. After looking at the conditions he decided it would be better to sail with the winds and currents and make for the Antarctic Peninsula rather than trying to turn around and sail back to Australia.  It is a remarkable story, and it really set the scene for what sailing in the Southern Ocean is really like on a small sailboat.

So, thank you to David for opening my mind and inspiring me to one day sail those very waters.

I met his son once when I was just preparing to complete my first solo sail from Australia to New Zealand. I was collecting Roger Mcmillan’s yacht ‘Cator of Margret River’ in Gosford, and this little red sailing yacht had just arrived from New Zealand. I introduced myself and then pepper him with questions. Eventually realised it was David Lewis’s son that I was speaking with, so I got my best solo sailing tips from a legend.

While I was on deck, I completed a full walk around before inspecting the Dimension Polyant Mainsail. There were some areas of the sail that have been getting chaffed on the rigging, so I inspected, and was pleased to see that the chafe was only in the ink of the branding. The sail looked as strong as it did when I started. My top two battens are broken but aside from that it is doing well considering the stress I have put it under.

I also checked over the steering gear, auto pilots and completed a walk around the decks to look over the rigging and everything else. Bob tells me that I have one last large Southern Ocean Storm to go through, so I am in prep mode before it hits.

When I finally returned below it was just on dark. I had intended to use the lull in the winds to have a bucket bath and wash my hair, it had been well over seven weeks since I last was able to wash my hair and I desperately wanted clean hair. I had been charging the batteries up with the main engine.

So, I was running the heater and the main cabin was as warm as it was going to get but as it was now getting dark, I didn’t want to have wet hair in the extra cold climate. But I was in desperate need of a new set of cloths having worn these way past their prime. I ended up having a not-so-nice bamboo wet wipe bath before putting the fresh set of base layers on. After that I dug out some more meals from a food bag and emptied the rubbish to the sail locker and finally it was time for dinner.

The winds have now built to average 25 knots but gusting up to 35 knots and it was still being annoying. We were still too slow in the lulls and when the winds hit 35 knots, we were overpowered forcing us into a roundup. As I write this the winds have been rounding us up, tripping all the alarms and causing us to go slow in the 35 knots, but now, not five minutes later and I am looking at 18 knots of wind.

I can’t seem to win in these conditions, and everything feels a little slow even when the winds are up. I possibly have some kelp or similar around the keel, but I will need to wait for steady conditions to work that out. I had managed to collect a tree size section of kelp on the keel around this area last time so it’s not out of the realms of possibility.

So, five minutes ago I was going to put the third reef in the mainsail and now I am so under powered we are going slowly again, so it looks like I am in for another night of frustrating conditions. I have also changed time zones today to UTC +6 so I am now only two hours behind Albany which is so exciting. No long now.

Bob (metbob) has been running some modelling for a possible ETA and currently it stands between the 25th – 28th of May. But this will likely change with the influence of the cyclone in the South Indian Ocean and the northerly winds that I am likely to get when I try to sail north to Australia on the way to the finish so hopefully they turn into westerly winds and I can get back a little bit quicker. (Note from Mum – we are all planning and hoping for a May 22 Arrival…just saying. I do have a reputation for being the eternal optimist though)

I am going to try for a bit of sleep ahead of this storm and just let Climate Action now sail herself for a while. Before I go however, I would like to take a moment to thank the following wonderful degree sponsor. This person is another late degree sponsor and have chosen a degree that I have already sailed past to I will honour them tonight instead.

042 East – Candice and Naomi Cushway – “Dedicated to our late mother Yvonne Cushway who was born in 1942 and sailed with our father Lloyd for a number of years. We both sail on our fathers’ Northshore 38 ‘Quarante-deux’ which is French for 42.”

Thank you so much Candice and Naomi for your amazing support. I feel honoured to be able to support you in celebrating your mother and her sailing heart. I really appreciate it.

All the best and goodnight.