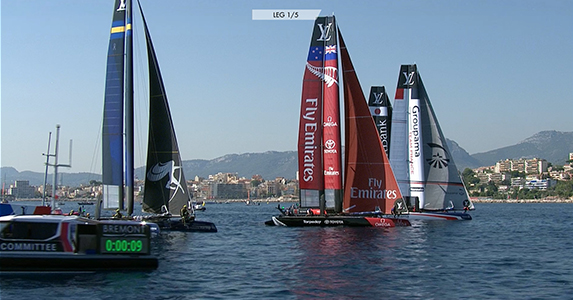 Tom Slingsby, the Olympic gold medallist who played a critical role as strategist during the 2013 America’s Cup, will take over as helmsman for ORACLE TEAM USA at the Louis Vuitton America’s Cup World Series this weekend in Toulon.

Regular skipper and helmsman Jimmy Spithill is still recovering from surgery on his elbow and elected to pass the baton to Slingsby rather than risk slowing his recovery.

For Slingsby, the change from tactician to helmsman will be a challenge, as there is nearly no practice time allowed in sailing the AC45F catamarans. The starts, a critical part of the race, are likely going to present the steepest learning curve.

“It is going to be tough. We only have a couple of very short practice sessions before the racing. When to pull the trigger on the starts is a real ‘feel’ thing and obviously, I will need the practice,” Slingsby said.

“We do great de-briefs with our coach, Philippe Presti, after each day to ensure we keep improving, and I know I’ll be getting pushed hard.”

“I think the fact that he’s been on board for all of the events so far will help Tom on the starts,” Presti said. “I think he’s excited, and I think he’ll do well.”

“No team can rely on one person,” Spithill says. “We’ve always set up for this, with a back-up at each position. We have the depth and the talent and I think the guys will be really competitive this weekend and get the job done.”

On Thursday, the team was able to squeeze in a short practice session in idyllic conditions on the bay off Toulon. The wind was 15-18 knots, warm weather, bright sunshine. While the sun is forecast through the weekend, lighter conditions are expected to prevail.

On the other hand here is Slingsby trialling for the Olympic gymnastics: