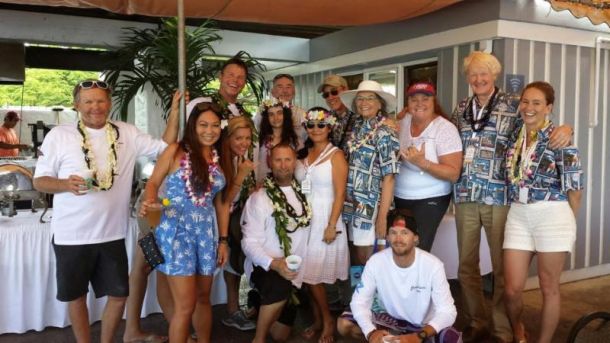 Honolulu, Hawaii – Boats from the two classes that symbolize Transpac more than any other have taken the top of the leaderboard in the 48th edition of this biennial ocean racing classic. Local-based James McDowell on his Santa Cruz 70 Grand Illusion is at the top of the provisional results in overall ORR scoring, followed by Chuck Nichols racing the Andrews 70 Pyewacket, with Craig Reynolds's TP52 Bolt in third place.

Results are considered Provisional untill all boats are finished and any protests have been resolved by organizers from the Transpacific YC.

Grand Illusion, Pyewacket and the other entries in Division 3 are older designs from the ULDB Sled era of the 1980's and '90's when these boats were the designed, developed, and built to be the fastest in the race. Sleds raced as a level class in the Pacific for years throughout the 1990's, then evolved towards getting faster (the so-called 'turbo-Sleds'), migrated to the Great Lakes, and then more recently have migrated back to their roots to enjoy great racing once again.

Time and technology overtook Sled design at the end of the millenium, so in 2001 the Transpac YC commissioned a new fast offshore-capable design to take its place: the Transpac 52. This design concept has produced dozens of boats built around the world, and as such has proven to be the most versatile and popular race boat design of its size of all time.

Finishers last night had to exert their patience, because the Race Committee was not offering an escort service into the Ala Wai harbor due to the high surf warnings for Hawaii's south coast: 10-15 foot waves were closing out the harbor and the approach deemed too dangerous to attempt at dark. So, at 0530 this morning several boats waiting on hold made the run in between sets, and the Aloha parties were in full force not long after.

The exhaustion, exhilaration, and relief (along with maybe a few mai tai's) quickly helped squelch any misgivings about this decision as crews celebrated their well-earned efforts.

The crew on Bob Pethick's Michigan-based Rogers 46 Bretwalda 2 are on their second Transpac, having done the race for the first time in 2013 and missing their usual summer schedule of “sweet-water” Mackinac races on the Lakes. Do they miss it, even given a second time of non-ideal weather for the Thursday starters?

“No way, I want to do this race every two years now,” said main trimmer Wally Cross from Detroit. When reminded that his view was very different on the dock two years ago, when he muttered “too long, never do this again…”, he shrugged.

In fact, it was Cross who organized getting a last-minute recruit to join the crew, and has now become a new Transpac convert: Tom Ritter from Detroit, who has a Melges 24 at Bayview YC.

“I got a text from Wally that said “Can you do Transpac next week? I'm not kidding,” said Ritter. “My family had just returned from a trip to Europe, and when I said I had this opportunity to do the race, they said “Go!” so here I am. This was really a great race, and I had a great time. I've never been this unshaven for this long and had this much fun.”

“We are a sail training vessel, but make no mistake, we take our racing seriously,” said Martha captain Robert d'Arcy. “We had an active program of races and cruises in our schedule, and Transpac fit in well, so we decided to enter. I'm glad we did, this was a great experience for our team. Besides, this race started in 1906, and Martha was designed in 1907, so we felt we should fit in well with the long heritage of this race.”

There are still about a dozen boats left to complete the course, including the Division 5 and Division 6 class leaders: Eric Gray's SC 50 Allure and John Chamberlain and Dean Fargo's Swan 651 Second Wind. Allure will finish sometime tonight and Second Wind late tomorrow, if the tradewinds hold as forecasted.

Provisional results are available at www.yachtscoring.com/event_results_detail.cfm?Race_Number=1&eID=1195.