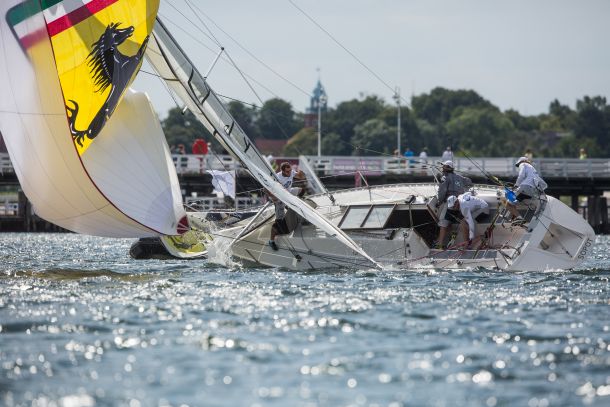 Sopot, Poland (29th July 2015) – The World Match Racing Tour’s tenth stage of the 2015 season, the Energa Sopot Match Race – set sail today. The twelve competing teams finished the first half of Qualifying in a day of mixed and gusty conditions up to 25 knots. As racing finished for the day, Bjorn Hansen (SWE) Nautiska Racing topped the leaderboard with a confident 5-1 scoreline, ahead of national sailing hero and former America’s Cup helmsman Karol Jablonski on 4-2, and fellow Swede Johnie Berntson, also on 4-2.

This is the 12th edition of the Sopot Match Race, this year sporting a new title sponsor, Polish energy company Energa. After last years blistering temperatures at the Polish seaside resort during the regatta, winds of up to 30knots are forecast for this weeks event with strong gusts testing the teams in their opening rounds today.

Defending Sopot Match Race Champion, Ian Williams (GBR) GAC Pindar finished the day 3-2 after losing against his matches against Karol Jablonski, and then to Nicolai Sehested after an unexpected ‘man overboard’ incident at the second top mark which saw Williams’ tactician Chris Main falling in the water after a halyad came loose, allowing Sehested to increase his lead to the finish.

Competing in his first Tour event of the 2015 season, Sehested had not realised what had happened as he crossed the line 2 minutes ahead.

“I saw him [Williams] slow at the top mark in what appeared to be a problem but I had no idea one of his guys had fallen overboard. We were happy with our lead at the time so we just headed for the finish.”

Competing in their first Tour event together and as separate teams, Gilmour brothers Sam and David also had the opportunity to meet in the same race during Flight 7. After a number of lead changes, elder brother David had an unfortunate broach on the last leg allowing his sibling to take the win. As Sam crossed the line, four time World Match Racing Champion and father Peter Gilmour posted a tweet from Australia exclaiming ‘Glad I am not there!’.

Tour Card Holders Joachim Acschenbrenner, DEN and Reuben Corbett, NZL both had disappointing days posting single wins, and Australia’s Matt Jerwood scored 2-3 (1.5). However with 11 flights still to complete before the semi-finals, there is plenty of opportunity for the teams to master the 34ft Diamant 3000 yachts with their IOR-style design, and regain points on the leaderboard.