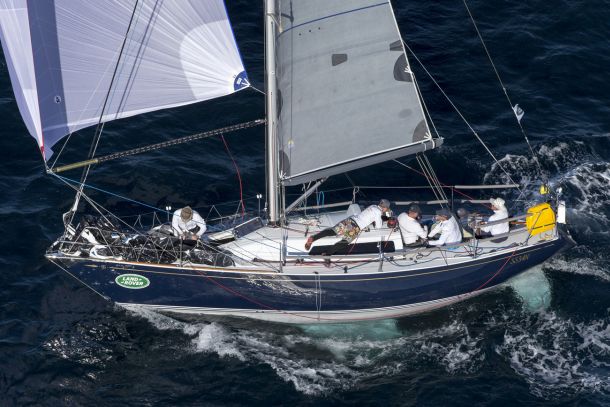 The oldest and smallest boat in the fleet Quikpoint Azzurro. Photo Andrea Francolini.

An error in recording the finishing time has meant Peter Harburg and his V70 Black Jack, have not won the Cruising Yacht Club of Australia’s 384 nautical mile 2015 Land Rover Sydney Gold Coast Yacht Race – instead Shane Kearns’ Quikpoint Azzurro, the oldest and smallest boat in the fleet, moves up from second into the winner’s box.

Peter Harburg said he and skipper Mark Bradford had looked at the results again and realised a mistake had been made in calculating Black Jack’s finish time.

“I like to win trophies, but I like to win them fairly. The cold hard fact is, we didn’t win,” Harburg, from Queensland, said today. “I congratulate the little boat on its win, they spent the longer time at sea, they deserve their win,” Harburg, ever the gentleman said. “Anyway, the Brisbane Keppel is next, we’ll try there and that big race in December,” he said referring to the Rolex Sydney Hobart Yacht Race.

“We saw the error and had to report it. It’s about being fair and it’s about sportsmanship,” said Bradford, the manager of North Sails Brisbane, who rang to congratulate Shane Kearns on his win.

For his part, Kearns was of course elated to win. “To finish second was special, to now be told we’ve won… I’ve come last a few times, so I’ve paid my dues, it was my turn,” he said laughing. “Not only do I have the oldest boat, I’ve got the oldest crew. It all fits.

“Roger Hickman was my inspiration – I wanted to beat him. We put a picture of him on the inside of the spinnaker just to remind us,” Kearns said of the 2014 Sydney Hobart winner and multiple Blue Water Pointscore champion and former Ocean Racer of the Year, who finished this race fourth overall and second to Kearns in Division 3.

Crew member Jim Nixon: “We thought we’d won, then we broke both spinnaker halyards in the fresh winds off Ballina and it cost us the race. We did the last bit of the race with our spinnaker on the jib halyard,” he said before discovering they had won. “We had a great start and went out the Heads with the 50’s and were small enough to avoid the parking lots, although we did find one off Smoky Cape.”

Kearns continued, “We had work done on the boat just before we raced and the rudder bearing was way too tight, so it was really hard to steer the boat. We took half-hour turns at the helm. Lucky all my crew own their own yachts, so they’re all good steerers.”

Kearns, who represents the CYCA, said the race was very tactical, but he said the good start made him feel positive for the race ahead.

“I also talked to my old skipper, John Walker (Walker is a well-respected yachtsman who died last year), throughout the race and I think he helped us. Imagine, I bought an old sinking boat cheaply with a credit card and found the crew at John’s funeral,” Kearns said wonderingly.

Quikpoint Azzurro’s owner completely revamped and modernised his reliable and sturdy yacht after finding it sinking in Queensland.

“New Doyle MacDiarmid sails, including a Code Zero, which has improved our reaching ability and a new staysail has stopped us rolling like a pig. I added the latest from Harken and Whale Spars rigging.  Now I have ‘the little boat that could’,” Kearns ended.

There were no retirements from this year’s race, with all yachts making it safely to Southport in good time after a slow start last Saturday.