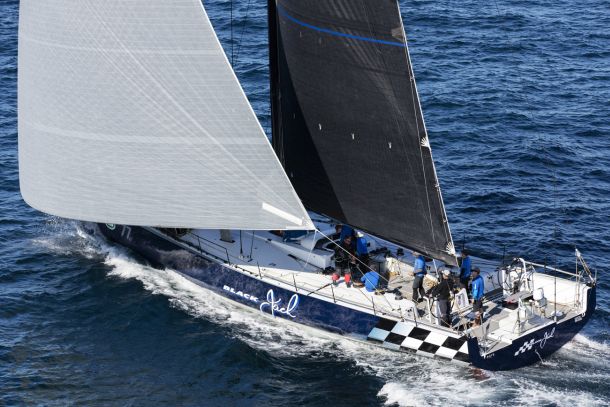 Peter Harburg’s V70, Black Jack, has taken pole position in the 2015 Land Rover Sydney Gold Coast Yacht Race, but with most of the fleet still racing, Harburg, his skipper Mark Bradford and the crew of the Queensland entry will have to wait it out.

However, as we’ve seen in the changing and challenging weather landscape, positions have yo-yoed since the race started at 1pm on Saturday. Now the smaller yachts in the fleet, including Quikpoint Azzurro, are in a race against the clock to beat Black Jack and Chinese Whisper.

Jenifer Wells called from Wild Rose to report: “The westerly finally arrived! Yesterday evening we enjoyed a dusk tacking duel with L’ Altra Donna (Andy Kearnan’s Summit 35) – ironically just north of Tacking Point. There were so many boats in sight that it felt like a national regatta rather than a long offshore race.

‘We had very pleasant light conditions and it felt like we were flying at 6 knots of boat speed after being almost becalmed for much of the day.

“Frustration returned when it was soon back into car park conditions, with navigation lights seen all over the place, and the AIS once again showing boats heading back to Sydney while caught in the tide,” said Wells, adding that the boats behind them had reduced their first night gains the Wild Rose crew had fought so hard for.

“Along with the Beneteaus, Occasional Coarse Language, Dare Devil, Komodo and others, we struggled to find breeze. With the westerly finally filling in, we’ve had a great battle with Ariel, Just a Dash, Alacrity and L’Altra Donna, switching between spinnakers and Code Zeros.

“Black Sheep is smoking and is just gonski – they seem to be having the race of their lives,” Wells said of the Beneteau 45 which had been leading the race overall since mid-morning, dropping down to fifth overall during the afternoon.

In PHS, Wax Lyrical, the X-50 owned by Les Goodridge and Rod West’s Jeanneau 45.2, Painkiller Forte (Qld) continue to fight for the win, following a challenge in Sydney between Goodridge, an ex- Navy commander and West, an ex-Army colonel. At stake is their reputations and a few jugs of rum.

Eleven out of the 62 yachts have now finished the Land Rover Sydney Gold Coast Yacht Race, with no retirements to-date. The latest finisher was Tony Kirby’s Patrice. As earlier reported, the Ker 46 picked up an 18 knot south-westerly which brought her to the finish line quickly at 02.01.53.27pm.

Behind the finishers it is all good news, with fresh to strong south-westerly’s laying over much of the coastal waters, with a south-east to north-easterly change expected later. A 15 to 20 knot southerly is expected for tomorrow, handing the remainder of the fleet perfect running conditions.