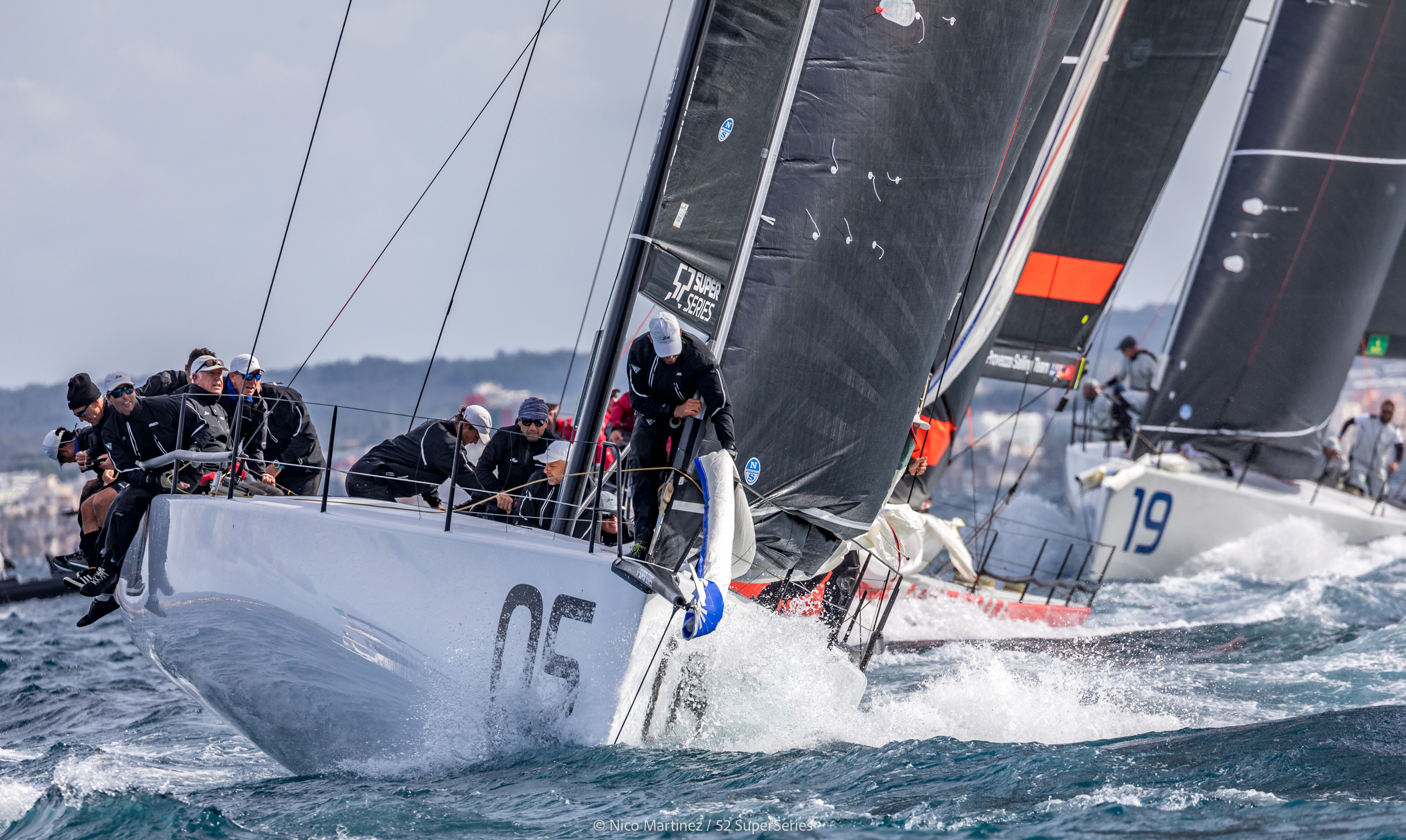 Sled is on the edge of claiming a second victory

Takashi Okura’s Sled team emerged from a dramatic penultimate day of the short, intense 2021 52 Super Series season carrying a lead of just one single point in the chase not only for the Rolex TP52 World Championship title, but also the 2021 circuit title.

With strong winds forecast – over 35 knots seems expected on the north coast of Mallorca – there may be considerable dockside debate whether the more sheltered Bay of Palma might yet prove sheltered enough for the world’s leading grand prix monohull class to offer a final title shootout over the two scheduled races.

After Sled’s 7,1 today, charismatic Italian tactician Francesco Bruni was smiling: “We were one wind shift away from the perfect day today. We could have been leading by three or four points more. We cannot have regrets about our day. It was good today, the team is good, we are in good shape.

In the 18-25 knots shifty, gusty offshore breeze there was no shortage of heart stopping drama.

The Plattner family’s Phoenix crew looked set to have sailed themselves into a strong position for both world and circuit titles. In second position two thirds of the way down the second run and closing Race 7 leaders Quantum Racing down the second run towards the finish line, their spinnaker tack suddenly exploded, the sail shredding in half. They had to finish with no spinnaker, dropping from second to sixth.

Forced to push the risk harder on the start line in the next race, Phoenix was over the start line and had to recross. A valiant fightback from 10th, true to their name, got the South African flagged team back to fifth, leaving them fourth overall on the world championship regatta standings, but just two points adrift of Sled.

Quantum Racing was in impressive form in the strongest breeze of the circuit yet. Punished for small mistakes, and perhaps not risking enough at times yesterday, Terry Hutchinson and Lucas Calabrese, closer to the right flank upwind, led all the way round and score their first win of the regatta.

With owner Doug DeVos steering, they followed up with a second behind the runaway Sled to be the team which is breathing down the necks of the Sled team. One point behind, Quantum Racing is poised to attack tomorrow – given the opportunity to do so – in search of their fifth 52 Super Series title and their seventh world title, their fourth since the start of the series in 2012.

After going 2,2 yesterday and with a third in the first race today, Harm Muller Spreer’s Platoon stood on the top of both leader boards going into the second windy race. In fourth going up the second beat, they looked good to lead into the final day. However, when both sides of that upwind yielded positive wind shifts, being conservative and trying to play the percentages in the middle of the course cost them two places.

The defending world champion from 2019, who have been runners up three times behind Quantum Racing and Azzurra, is also just one point behind the World Championship leaders and two points behind on the 2021 leaderboard.

The shoot out for the titles could not realistically have been scripted any more dramatically. All that is needed now is the wind to allow the full schedule of 10 races to be completed. Weather modelling seems to suggest mean wind speeds in the Bay of Palma of under 30 knots and most of the teams want at least one more shot…

Phoenix strategist Cameron Dunn pointed out, “At the start of that last race when we were sailing round, it was pretty solidly 25-26 knots, and in that flat water that’s pretty comfortable. It’s a bit hairy but good fun. I reckon we could be racing in the flat water up to 26/27 knots.

“It was an awesome day’s sailing, but not quite what we were after. Overall, we are sailing well, the boat’s going well, the crew work is phenomenal. It’s incredibly tight racing, a few things didn’t quite go our way today, we’re still there now we’re praying to the wind gods that we can go sailing tomorrow.”