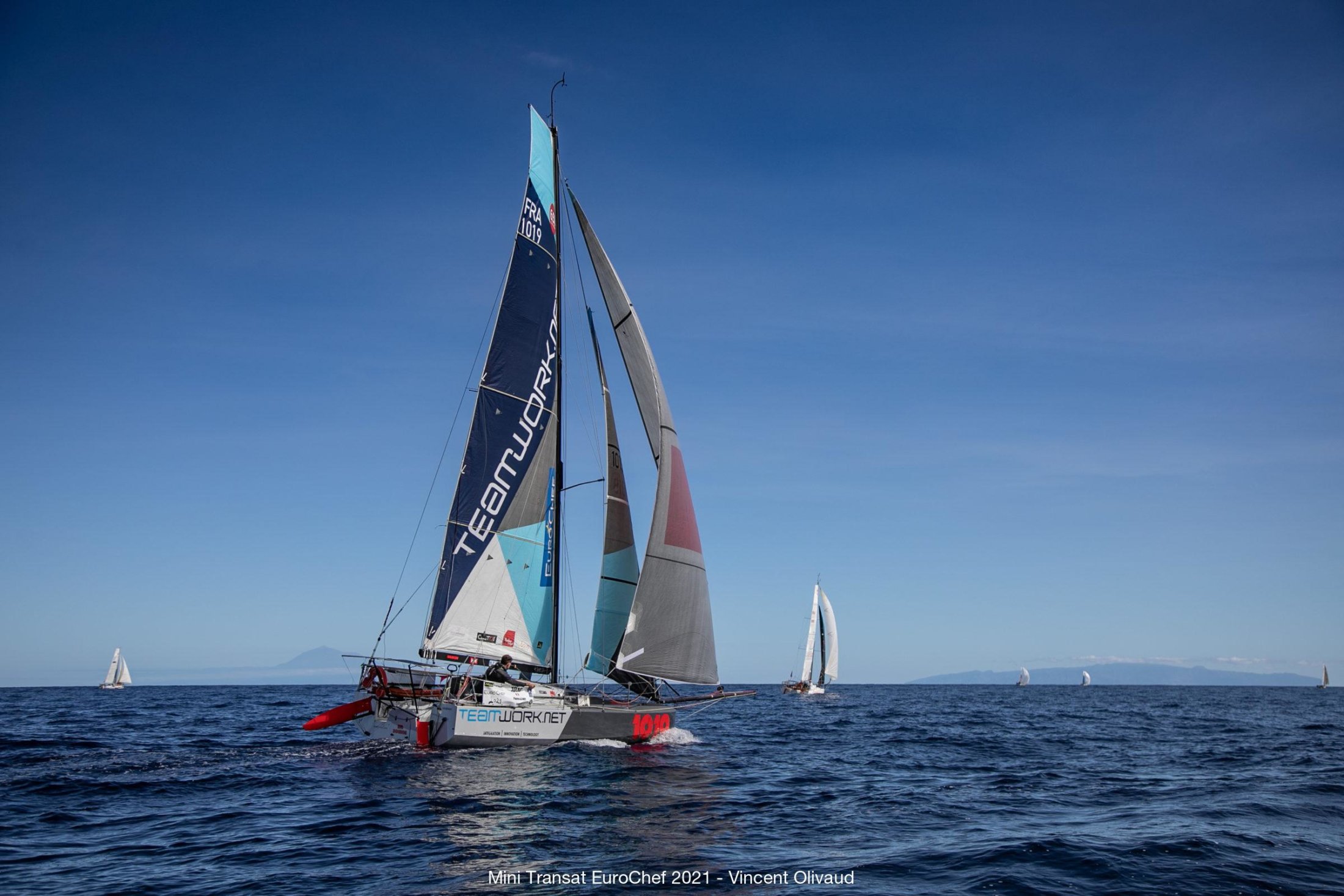 As expected, those in the south have regained the advantage on the leader board in both the prototype and production boat fleets in the Mini Transat this Friday local time.

The reasoning behind this is that the front runners are powering along at an average speed of over 10 knots towards their goal. Those further north are struggling to post speeds which are only half as fast, with no other option than to dive southwards to avoid stalling even more in the zone of calms sprawled right across the middle of the Atlantic.

As such, it’s crunch time in this 23rd Mini Transat Eurochef, with the deficits building inexorably within the fleet. Deficits which will be complicated to make up further down the track.

This very scenario has been in the pipeline for several days and today it’s a done deal: the southerners are coming back strongly on the leader board. Having initially accepted that they would lose ground by extending the distance to sail, they are now harvesting the fruits of their labour further down the racecourse by benefiting from a north-easterly breeze of between 15 and 18 knots, which is propelling them along at pace in the right direction at last.

Their adversaries, further north, are now struggling to make headway and slipping down the leader board in the process. By targeting a more direct trajectory, they have also taken the risk of getting dangerously close to a vast band of calm conditions stretching lazily across the middle of the Atlantic. As a result, they’ve been stung by a fairly drastic penalty.

Worse still, they’re likely to have a heavy price to pay at the finish. Over the coming hours, as their rivals continue hurtling along at an average speed of over 10 knots due west, they will only be able to post speeds of between 4-6 knots with no other solution than to zigzag southwards before they too can finally bend their course round towards the West Indies.

Within this context, certain skippers are bound to see their hopes turn to dust. Indeed, it’s likely to be a low punch for sailors like Melwin Fink (920 – SignForCom), the current leader in the overall ranking, and for some famous hard hitters like Léo Debiesse (966 – Les Alphas), Julie Simon (963 – Dynamips), Jean Marre (991 – Sport dans la Ville – Time for the Planet) and Gaël Ledoux (886 – Haltoflame – Ilots.site).

Having been jockeying for position at the front of the fleet for some time, they’re now slowly but surely tumbling down the leader board to be eclipsed by sailors like Loïc Blin (871 – Technique Voile – Les entrepreneurs du Golfe), Jean Cruse (910 – Ini Mini Myni Mo), Marine Legendre (920 – EY – Pile Poil), Quentin Riché (947 – Race for Pure Ocean) and 20 or so others.

These too are ultimately set to be replaced by the likes of Italians Alberto Riva 993 – EdiliziAcorbatica) and Giovanni Mengucci (1000 – Alpha Lyre), Romain Le Gall (987 – Les Optiministes – Tribord), Basile Bourgnon (975 – Erdenred) and Austrian Christian Kargl (980 – All Hands on Deck), to name but a few.

It’s an almost identical scenario in the prototype category for competitors like Matteo Sericano (1011 – Gigali) and François Champion (945 – Porsche Taycan) who, having been the pacesetters for the past five days, are now gradually falling back, far behind the new leaders.

These newbies now include Pierre Le Roy (1019 – TeamWork) – who’s sailed an absolute blinder to the south over the past 24 hours -, Tanguy Bouroullec (696 – Tollec MP/Pogo) and the impressive Arno Biston with his 16-year-old boat (551 – Bahia Express). Today, all of them are posting great speeds of between 10 and 15 knots despite their 100 miles of lateral separation.

Evidence, if it were needed, that though the trade wind is not yet very strong, it is blowing at roughly the same intensity for all the solo sailors to the south and should remain so for the next 48 hours. However, this news may be of benefit to the latest ETAs, with the routing now bringing forward the potential denouement from the morning of Saturday 13 November to the afternoon of Friday 12 November.