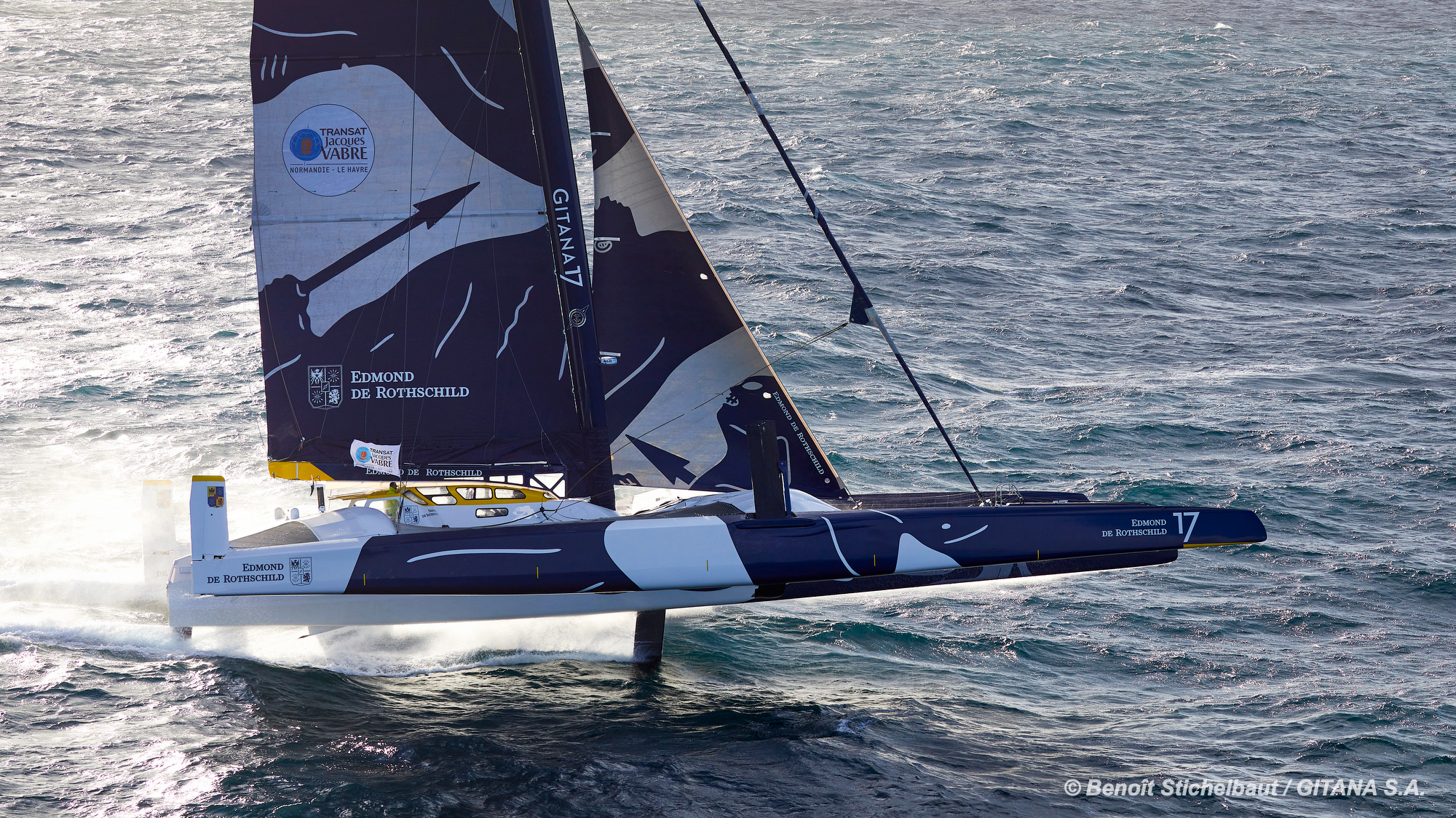 In less than 48 hours’ time, the 15th Transat Jacques Vabre will set sail off Le Havre, below the high cliffs of Cap de la Hève, and in the Bassin de l’Eure, where the maxi Edmond de Rothschild has been moored for the past week amidst her four rivals in the Ultime category, the atmosphere is calm and studious.

Well-versed in these pre-race phases, the members of Gitana Team are putting the finishing touches to the last few details, but the 32-metre giant is now ready to go. A few metres away, in the five-arrow racing stable’s motorhome, a veritable mobile base camp for the team at events, the weather cell is sharing its initial analysis of the situation out on the racetrack in the company of the two skippers, Franck Cammas and Charles Caudrelier.

To accompany them in this Transat Jacques Vabre and support them with every aspect of the weather and strategy, Franck Cammas and Charles Caudrelier have formed a top-flight and highly complementary weather cell. Throughout the race, Erwan Israël and Stan Honey will take it turns to provide 24/7 monitoring from Lorient and Gitana Team’s Breton base, while Chris Bedford works remotely from the other side of the big pond.

Honey is American. He boasts an extensive career as an on-board navigator with a great slew of transatlantic and transpacific records to his credit, notably with the super maxi Comanche, victory in a Volvo Ocean Race and a successful Jules Verne Trophy alongside Franck Cammas and Groupama back in 2010.

“It’s the first time Stan has done the routing like this from shore, However, he’s an excellent navigator. Usually, he’s aboard the boat. He’s someone who is very perceptive, very fair and he’ll always have some highly pertinent reflections to make,” Franck Cammas explained.

“Charles and I don’t need someone who tells us which heading to follow. What we’re after, is much more about an approach to the general strategy or details regarding satellite observations, which is something he has a complete mastery of.”

Crew in the Jules Verne Trophy, an inshore racer, an on-board navigator and a fine strategist, Erwan Israël has already taken up the router role before, but this will also be his first time for Franck and Charles.

“We were keen to have a sailor who has a very good understanding of the weather, so that he has experience from sailing aboard the boat, which makes his weather analysis realistic with regards what we’re capable of doing on the boat double-handed. Erwan ticked all the boxes,” Charles Caudrelier assures.

“He is very familiar with the Maxi Edmond de Rothschild, he’s able to give his opinion as if he were on board and can feel things, which is interesting. In addition to being a very good navigator, he has a really great feel for the boat and can sense when the boat’s going well, not so well, or when there are difficulties in relation to the sea state. We speak the same language.”

Chris Bedford, a fellow American and a meteorologist by profession, will complete the trio. An old hand from the America’s Cup scene, He already knows the maxi Edmond de Rothschild and her skippers since he’s previously worked with Marcel van Triest, especially so during the team’s last Jules Verne Trophy attempts.

Cammas explained to us his very specific role within this device: “Chris will perform the same role as he did with Marcel, namely sharing his purely meteorological opinion. His particular focus will be the analysis of the forecast and the weather models, and he’ll give his view on whether or not they’re accurate.

“His work mainly relates to long-term forecasts, but he’ll also play a very active role in passages like the doldrums. He has expertise in these areas, which we don’t have.”

With two days to go till the start, the conditions are becoming clearer, even though the models are still struggling to come to an agreement. Despite all that, the routers are venturing their initial estimates.

“We’re going to have some very good conditions at the start in terms of the images. There will be between 15 and 25 knots. This morning, some of the grib files were giving a slightly stronger north-westerly wind. This wind sector means that the first few hours will be played out in close-hauled conditions with sheets slightly eased, which is quite a quick point of sail for our boats.

“The fleet won’t head straight out to sea as, first of all, there’s a coastal course towards the cliffs of Retreat of around 14 miles. The English Channel will involve a long beat on starboard tack, but it will still be quite quick. At around 20:00, 21:00 UTC, the first Ultimes should be at Ushant.

“The next stage comprises more uncertainty, as there’s a ridge of high pressure, which will push down onto the land. The big question at the moment relates to whether we can slip between the coast and the high pressure.

“This move works on some of the weather files, whilst with others it’s simply no go, which would force us to go right around it via the west. The files haven’t yet come to an agreement in that regard”, smiled Erwan Israël, who’s already well aware that this 2021 vintage of the Transat Jacques Vabre promises to be tough-going ‘meteorologically’.

Competitors in the Ultime category