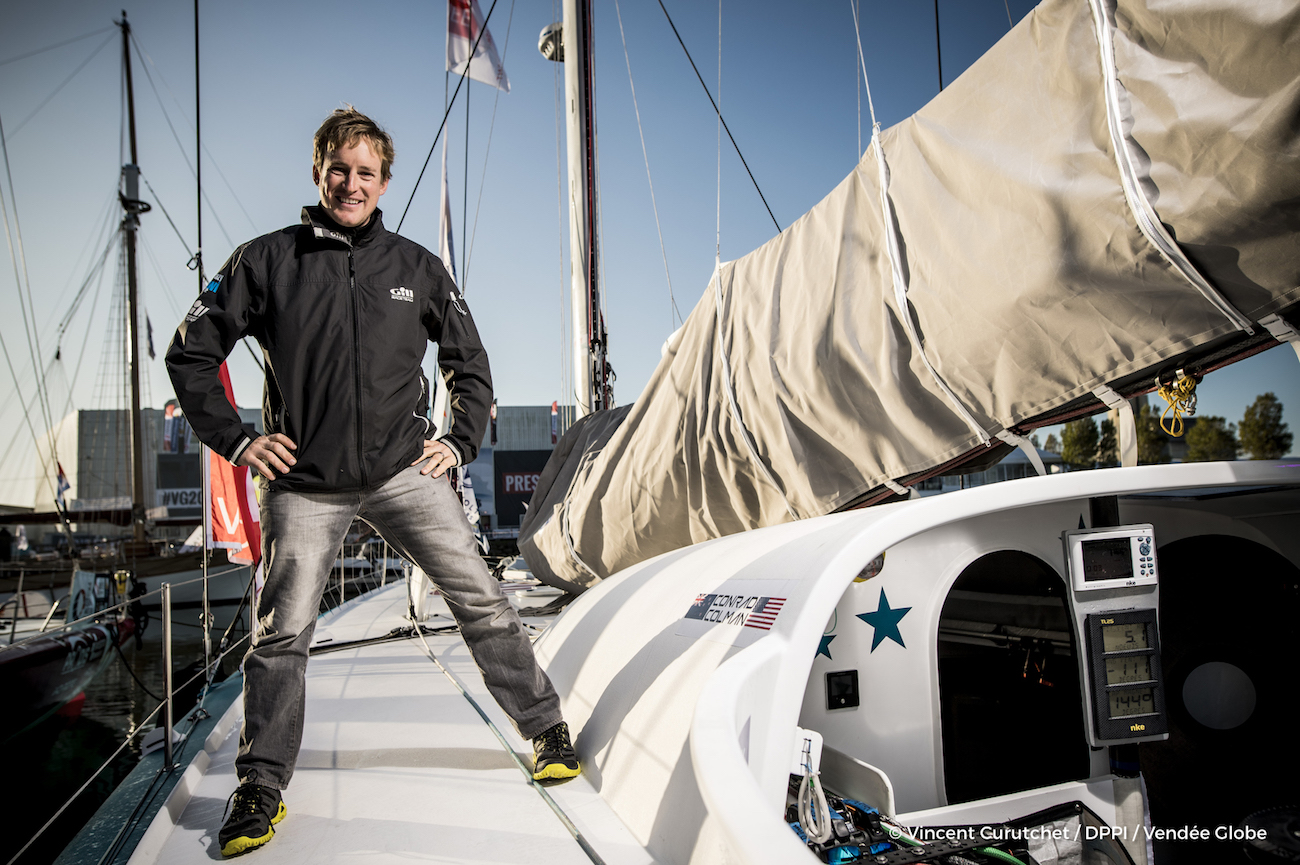 Conrad Colman ahead of the start of the Vendee Globe. Photo Vincent Gurutchet/DPPI/Vendee Globe.

French and international race skippers are returning to sun drenched Les Sables d'Olonne after taking a their final rest at home before what is always a frenetic, highly charged last week before the Vendée Globe solo non stop around the world race starts next Sunday, 6th November. The warm weather and summer like temperatures on France's Vendée coast belie what is ahead over the next 70-80 days but continue to draw big crowds to the town.

The young French based skipper Conrad Colman, who holds dual nationality of both New Zealand and the USA, would prefer to be spending time with the thousands of interested visitors, discussing his bid to become the first solo skipper to complete the Vendée Globe using only 100% Natural Energy sources. But he still has the final pieces of a complicated financial jigsaw to put in place. Colman will be the first Vendée Globe skipper to use his primary electric motor – in place of a diesel engine – as a power generating source as its turning propeller becomes a hydrogenerator. His programme – relatively late and seeking primarily to validate the natural technologies and deliver a strong message – contrasts with that of Vincent Riou. The only skipper in the race to have won the Vendée Globe before, in 2004, is relaxed, ultra ready and – entering the final countdown to his fourth attempt at the solo round the world race – needs only to concentrate on the new long term weather outlook as it evolves this week.

The Whys and Watts of Conrad Colman 100% Natural Energy

Conrad Colman is the only skipper planning to push off the dock on Sunday 6th November seeking to become the first soloist to race around the world non stop in the Vendée Globe using only 100% natural energy, that is to say no fossil fuels. On an older boat, launched in 2005, Colman is resigned to the fact his IMOCA 60 does not have a race winning pedigree, but his primary goals come from the heart. “The objective is to have it as a reflection of my philosophies. Growing up in New Zealand I was aware of the hole in the Ozone layer there. Even when I was little I would always clean the beaches with my mum. I still do. And I was always taught to tread lightly,” Colman adds. “I converted to become a vegetarian and still am not especially because I care about cute lambs but because I was more concerned about the global impact of the chain, of food production and consumption. And so the project is a reflection of my ideals. Electrification is coming in our infrastructure.”

At the heart of Colman's energy system is an electric motor. When the boat is moving the prop opens about one third and turns, generating electric power which is stored in nine batteries. Colman has solar panels on his mainsail on the coach roof of 100% Natural Energy. And he is fitting a Watt & Sea hydro generator as back up. Fully charged he has a range of five to seven days depending on how hard the autopilot has to work. As his electric motor is also motive power for the IMOCA a data logger monitors his electronic input and output as the equivalent of an engine ‘seal'.

And he asserts that alone reduces his stress levels and allows him to focus on sailing efficiently. The biggest downside? With no heating it is going to be chilly in the south for the 34 year old. In Colman's mind getting around and proving it can be done comes ahead of targeting any particular finishing place. In the 2008-9 race Yannick Bestaven, the founder of the Watt & Sea hydrogenerator was an early pioneer for hydro and renewable power but had to retire in the Bay of Biscay. In the 2012-13 race Javier ‘Bubi' Sanso came very near to completing the race but lost his keel and had to abandon Acciona 100% Eco Powered capsized 360 miles south of the Azores. Colman takes up the baton with a fierce passion.

Colman explains: “I have 350 watts of flexible solar panels on the mainsail either side, just above the second reef. I am installing 400 watts of solar panels on the cabin top and three I am able to use the propulsion battery pack for my service needs. So that was something which Bubi Sanso did not have, he had a hydrogen fuel cell and a huge series of batteries and all that was attached to his (electric) motor which was sealed (he did not use the engine to generate electric power) and so he was carrying a huge capacity which he was not able to use.”

“Because I have an electronic seal, which is essentially a data logger which captures the status of the system for one minute over each of 90 days, I am allowed to make withdrawals into the propulsion battery pack. Thus for the first time ever in the IMOCA circuit then I can use the propulsion propeller as a generator. In four years we have made such a big step forwards and I am using all of the tools we have on board, not just carrying around static weight.

Colman will effectively be the first skipper to be allowed to use his electric engine and its prop as a hydrogenerator. “The drag is negligible. It does not even register a change on the speedo when it is goes on.”

Some people might rail against the very idea of a bespectacled 44 year old with salt and pepper grey hair riding a skateboard. Hipsters anywhere in the world would not bat an eyelid. But for the discreet, retiring Vincent Riou, it is all part of his physical preparation as he seeks to become the only the second skipper after Michel Desjoyeaux to win the Vendée Globe twice.

The meticulous technician prepared Desjoyeaux's winning boat, PRB, in 2000 before stepping up to win in 2004-5 in the colours of the Vendée based building supplier which has a long and proud association with the race dating back 24 years. Quiet and unassuming Riou is a favourite on the crowded dock in Les Sables d'Olonne. He is the housewives' secret crush, as befits a Vendée Globe winner in this region, just as he is also the accessible, smarter mate to the builders' and construction professionals who make the four yearly pilgrimage to Les Sables d'Olonne as guests of PRB. As they leverage their investment PRB host 300 VIPs per day, over 2500 over the course of the 21 day build up.

But those in the know also consider Riou their own favourite to win this eighth edition of the Vendée Globe. His highly optimised VPLP-Verdier design is deemed by many of his nearest rivals as the fastest all-rounder. It may not have latest generation hydro foils – a decision Riou says he is content – with but his 2010 launched orange IMOCA has the reliability of miles built in for skipper and boat together. Riou and his team have also succeeded in making incremental speed gains optimising the foils, angles and positioning, keel, ballast and aero package. These have been validated this year with a second place in the Transat Bakerly and last year Riou and co-skipper Sébastien Col won the Transat Jacques Vabre.

Riou rides around Port-la-Forêt and elsewhere on his skateboard. In fact it helps him work on his balance. He runs at least twice a week, lifts weights in the gym, cycles and goes stand-up paddle boarding. It is all part of the conditioning programme. When there is enough wind, he enjoys sailing his foiling Moth or going out surfing, if the waves are big enough. He is not one to work with a sports psychologist. He works alone to be able to face up to whatever the Vendée Globe throws at him. He admits he hasn't been able to find the right person to stick with for a long time, as to be effective, there needs to be a close, open relationship. ”This is my own personal method working on my mental ability. It may involve books or any other way of learning. What is certain is that I am motivated. Once I decide on something, I give it my all.” An attitude, which allows him to put the disappointment of having to abandon the 2012 Vendée Globe when his PRB was badly damaged when it hit a metal buoy in the Atlantic.

Riou is relaxed as he considers his fourth Vendée Globe start, enjoying the Mediterranean weather which has rendered the Vendée Globe start more Saint Tropez than Les Sables d'Olonne: “Early next week, we'll be looking at the weather forecasts. It's similar each time, but I have never been so well prepared. I have done a lot of sailing over the past two years. We started the technical preparation well in advance. as there weren't any major modifications this year. That allows us to be here without feeling any stress.”

Even with all the media hype attached to the question of foils or no foils, Riou remains cool and pragmatic: “Today, I'm happy with my choice. I may not feel the same in two and a half months from now… I think everyone has their chance together, the foilers and a few boats without foils. The weather is going to be key in deciding the outcome. If there's a lot of wind and we have a lot of reaching, it's going to be hard competing against the foilers. But in other conditions, we have a card to play. When I took the decision not to fit foils, I had already been watching the boats with foils for four months. At that point, it was complicated for them. In many conditions, they simply weren't fast.”