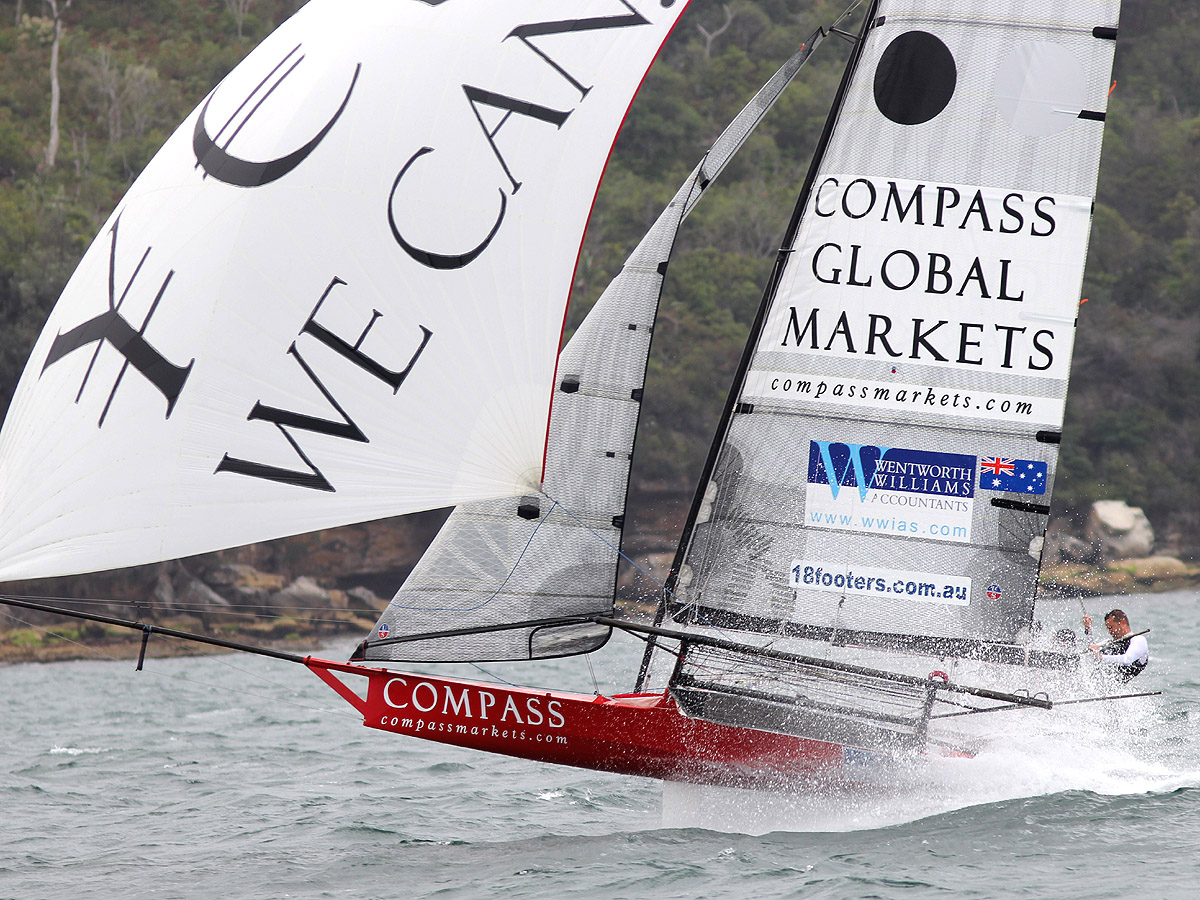 Coopers 62-Rag & Famish Hotel won a dramatic Race 1 of the NSW 18ft Skiff Championship on Sydney Harbour after a brilliant performance by her crew in the fresh North East wind conditions.

The win was completely unusual as the skiff used a borrowed mainsail from the Appliancesonline.com.au skiff and two of the appliances crew sailed on The Rag. Tom Clout skippered the winner with Mark Kennedy and Tom Anderson in the team. Clout and Anderson are usually the crew with David Witt on Appliancesonline.

The leaders took a variety of courses on the first windward beat from Clark Island to the Beashel Buoy and little separated the leaders all the way up the course. Asko Appliances won out to lead narrowly from Coopers 62-Rag & Famish, followed by Smeg, Yandoo (John Winning), Line 7, defending champion Thurlow Fisher Lawyers (Michael Coxon) and De’Longhi.

Smeg had a little trouble setting the extra and it allowed Asko and The Rag to edge away slightly on the run into the wing mark in Rose Bay. Asko Appliances retained the lead at the Rose Bay mark but this was reversed when Coopers-Rag grabbed the lead at the bottom mark off Clark Island.

The two leaders held their positions on the following windward leg back to Beashel Buoy, though Thurlow Fisher Lawyers was starting to make a move and was close up in third place. Keagan York’s Compassmarkets.com had come from well back in the early stages of the race and was putting pressure on the leading group.

A few capsizes and some gear breakage had also quickly reduced the fleet numbers.

The second spinnaker run from the Beashel Buoy gave spectators on the club’s ferry a great view of some fantastic action and speed sailing as the crews drove their skiffs hard. The Rag’s crew held their lead while many others behind them capsized on the approach to the Clark Island mark

Over the final lap of the course, the wind was strong and the racing tight as Coopers 62-Rag & Famish Hotel was under enormous pressure from Thurlow Fisher Lawyers. The Rag set her spinnaker for home 20s ahead of Thurlow Fisher and the race was on to the Rose Bay mark.

It seemed as though there may have been a little more north in the wind direction as the two leaders battled their spinnakers on the run between the islands to the finish line.

The Rag’s crew were first to drop and it seemed as though Thurlow Fisher was going to grab a last minute win when her crew elected to hold onto their spinnaker for the tight run to the finish. Thurlow’s crew looked reasonably comfortable in the tough conditions but could do nothing about saving their chances when the boat nose-dived just 300 metres from the finish line.

If the rest of the NSW Championship races and the other major championships later in the season live up to the action we saw today there will be plenty of excitement for the large spectator fleets on the harbour.

Race 2 of the NSW Championship will be sailed next Sunday. The Australian 18 Footers League will have its usual Spectator Ferry available to follow all the action. The Spectator Ferry is also available throughout the entire 2016-2017 Season, leaving Double Bay Wharf, alongside the clubhouse, at 2.15pm.