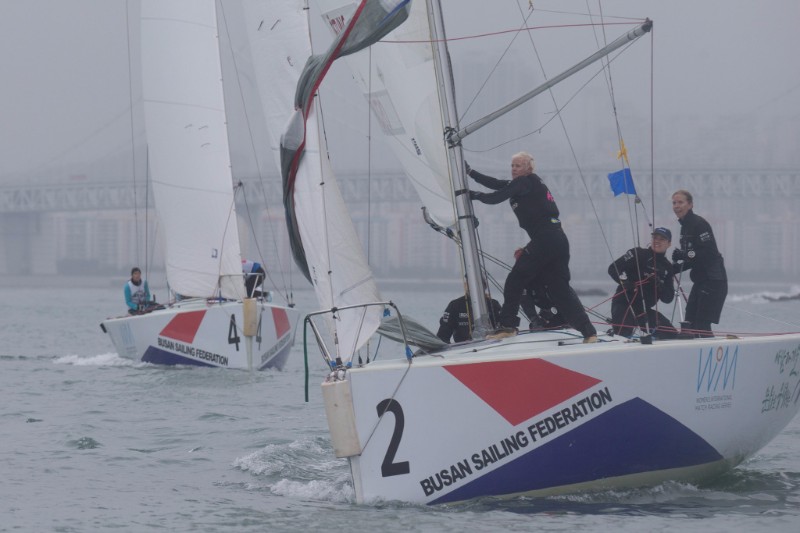 It was cold, rainy, wet and not very windy, but yet an eventful and really exciting Friday on the waters just outside Haeundae Beach in Busan, Korea. Claire Leroy (FRA), Lucy Macgregor (GBR), Anna Östling (SWE) and Katie Spithill (AUS) went through to the semis. And Östling secured her 2016 WIM Series title:

“We’ve wanted to win the WIM Series for so many years, and finally we made it. I’m so proud of my team,” the Swedish skipper cheers.

Early Friday morning French round-robin winner Claire Leroy surprised most people at the Busan Cup Women's International Match Race, as she chose compatriot Pauline Courtois to be her quarterfinal opponent. Swedish skipper Caroline Sylvan, who finished the round-robin on 8th place, would perhaps have been a more natural choice:

“We chose between Pauline and Caroline. I haven’t raced either of them very much, but I think Caroline has more experience in bigger boats, as here in Korea, so that’s why we picked Pauline for our quarterfinal,” she explains.

Obviously Leroy’s move was right, since she defeated Courtois in two straight matches, for a slot in Saturday’s semi final:

“The matches were close, but maybe a little bit like a lottery. Weak winds, occasional puffs and a lot of big wind shifts made it very hard today,” says Leroy.

Sylvan faced Lucy Macgregor, and was down 0 – 1 after the first match when a private puff took her around the British team on the last run, for victory in their second match. Before that, two of their matches had been abandoned in the light winds, so they got a lot of prestart exercise. In the last and decisive match, Macgregor broke back to secure her semi final ticket 2 – 1:

“We had to work hard for that today, and I think we deserved to win. We won all five starts and were ahead also in the abandoned races. And when Caroline came from behind it was a tossing coin situation,” Macgregor comments.

Australian Katie Spithill raced Trine Palludan, substitute skipper for Danish Team Ulrikkeholm, and had to fight really hard over five matches to advance to the semis with a 3 – 2 score. In the weak winds and shifty conditions Palludan found a speed advantage, forcing Spithill to use every conceivable tool in her match racing skill box. The Aussie had to cause her opponent no less than four penalties to be able to make it:

“I’m happy for the tight racing against Trine, since it taught us a lot for the semis,” says Spithill.

“I think we sailed really well today, but we fell on lack of match racing experience,” Palludan admits.

By defeating American Stephanie Roble 3 – 1 in their quarterfinal, World #1 Anna Östling didn’t only get her Busan semi final slot. Her advancement also gives her a top four finish in this 4th event, meaning no one else can threaten her WIM Series 2016 title. Never before has a skipper won three WIM Series events in one year, but Anna Östling conquered Helsinki, Lysekil and Sheboygan to gain maximum 75 points before Busan. And she declares that she’s not finished yet:

“By no means. Tomorrow we will do our utmost to take our first victory here in Busan too,” she concludes.

The Busan Cup Women's International Match Race will be concluded with Saturday’s semis and final.