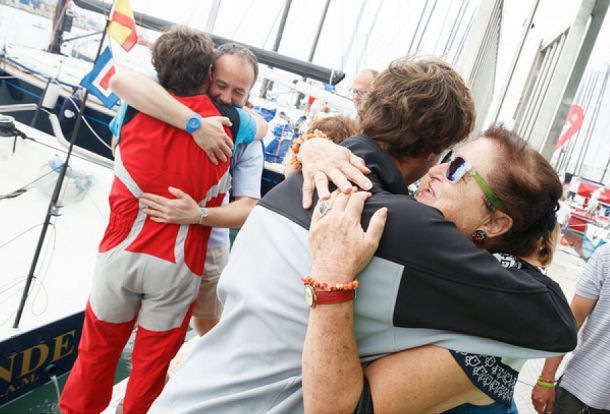 One of the participants of 34 Copa del Rey MAPFRE can claim to have been reborn. This is an incredible story, especially at 84 years old.

The TP52 “Duende 52” was sailing last night towards Palma to join the fleet of 136 boats which have completed the pre-registration for the race this year. Whilst 8-9 miles from the island of Dragonera, sailing downwind in more than 35 knots of wind speed, the owner and skipper, Jacinto Rodríguez, gave instructions to lower the mainsail. Seconds later, the boat gybed and the boom violently struck the owner in the head, throwing him overboard. Immediately, the crew performed a man overboard manoeuvre and launched a mayday. The Spanish Maritime Rescue activated the search operation at 4:30h in the morning.

Right away the helicopter “Helimer 213”, the boat “Salvamar Acrux” (21 meters long, based in Puerto Portals) and the ship “Marta Mata” (39.7 meters long, based in Palma) joined the search operation. Other boats that were in the area also responded to the search and rescue call from the Maritime Rescue, including two ships, Balearia’s “Abel Matutes”, Acciona’s “Tenacia” and the sailboat “Sea Hawk”. “Duende 52” itself and the SAR helicopter (Air Force).

More than four hours in the water

Ignacio Crespo, captain of “Marta Mata” explained how just 15 minutes after receiving the warning they were already sailing towards the area of the incident. “It is 30 nm from our base, so it took a bit over three hours to get there.”

More than four dramatic hours passed until Jacinto Rodríguez was located by the helicopter “Helimer 213”. “Just at the time when they were leaving, they sent the position of where they thought they had seen something, so the helicopter which was going to relieve them went to that position and found that yes, there was the sailor. The boat Sea Hawk was reaching that position, which was sailing at 12 knots towards Ibiza, and I saw on my port side that they slowed down and changed course, so I already suspected that they had seen him.”

At 8h50h in the morning, Jacinto Rodríguez was rescued by the crew of the British sailboat at about nine miles north of Dragonera four hours and twenty minutes after the rescue operation was activated. “The behaviour of the crew of Sea Hawk was very professional, because they approached, threw the life ring, marked his situation with a smoke signal and even threw a life raft.” The SAR helicopter hoisted him and moved him to hospital Son Espases in Palma, where he arrived just ten minutes later in good condition, although very tired.

Jacinto Rodríguez himself explained once on shore how he received a strong hit from the boom that caused a deep cut on his left eyebrow and how in the fall he hit his left calf with the stanchions. At the time of the incident he was wearing padded trousers which turned out to be a great help to keep afloat, “The trousers were bad for swimming, but it gave me buoyancy,” he declared. According to the doctor who treated him, that was one of the keys for him to hold on so long in the water. The brave owner watched from the water the whole rescue operation, “the lights of the boats looking for me, the helicopter flying over the area,…” certainly an important shot of hope in his extreme situation.

Inés Mansilla, his wife, wanted to welcome the crew of “Duende 52” upon their arrival at the Real Club Náutico de Palma. “Today was definitely not a good day for him,” she said. “I was very upset, but finally very happy. Once he was rescued they told me, `your husband is not a man, he’s a rock`. And he is almost already on racing mode, because he is saying that they have to train tomorrow.” Alongside Jacinto Rodríguez his son and grandson, who were very excited when they arrived to shore, were also sailing with him.

At the time of writing this information, Jacinto Rodríguez continued under observation in the hospital Son Espases but he could leave this evening.

“Duende 52” is a TP52 based at the Club Nàutic d`Arenys de Mar. It is a Botín Carkeek design built in 2007 in the United States, former “CAM” owned by Fernando León and Kiko Sánchez Luna and where the King HRH Felipe VI also sailed. Jacinto Rodríguez bought it in June 2014 and debuted with it in 33 Copa del Rey MAPFRE.

The “Duende” saga dates back to the 1970s, and started with a Puma 34 which was followed by five other boats before the IMS 50 which Jacinto Rodriguez competed with for two decades before moving to the current “Duende 52”. In 34 Copa del Rey MAPFRE he is pre-registered to compete in class Rías Baixas IRC 1.

The search and rescue operation of the owner and skipper of “Duende 52” has been coordinated by the Maritime Rescue Centre in Palma de Mallorca. From there they wish to thank all those who took part in the search and would like to remind the need for all sailors to incorporate at all times the life vest on board. “Comfort can’t go ahead of the safety of one’s life,” they mentioned.