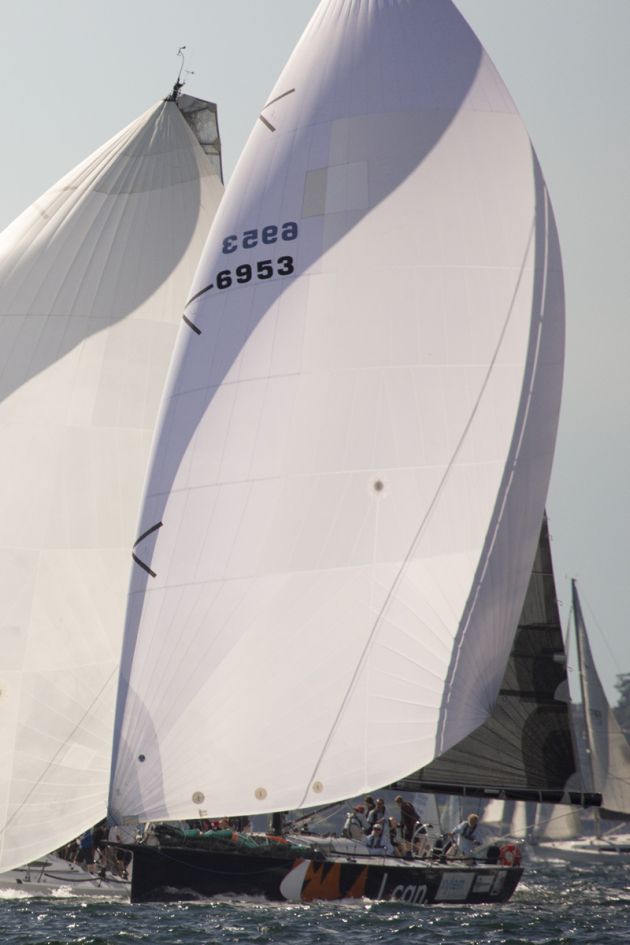 It looked likely that rain and gloom would be part and parcel of Sunday’s opening pointscore race in the Cruising Yacht Club of Australia’s (CYCA) Land Rover Winter Series, but it was to the contrary when light rain ceased and cloudy skies parted, giving way to a glorious sunny day and ideal racing conditions.

A fleet of 114 boats were on the Sydney Harbour start line, with David Pescud’s Sailors With DisAbilities starting the season well, taking the gun in Division A1, from Steven Proud’s Kernan 44, Swish, and The Goat, a Rogers 46 owned by Sebastian Bohm and Bruce Foye.

“I woke up this morning and it was grey and raining, but by the time we got back to Sydney and down to the club, the sun was out and it was a beautiful day – and we won the first race of the season – does it get any better,” Pescud asked. “We did the CYCA twilights before this series. They are both fantastic opportunities for near-novices and for our volunteers. They can learn in a really good environment and it’s really special to give back to our volunteers in this way.

“We had a lovely breeze; the Harbour in all its glory. Where else would you be,” said Pescud adding, “I hope the win doesn’t affect our handicap.”

Dentist and world traveller, Basil Diethelm won Division C with Sumatra, his well-appointed Swan 48 Cruiser. Possessing such luxuries as a water maker and coffee machine, Sumatra requires fairly lusty winds to perform well – and she got just that.

“What an excellent day,” Diethelm commented. “The boat’s heavy, so the 15 plus knots from the north and north/west suited her down to the ground. It was like sailing in the Caribbean.”

A 55-year member of the CYCA, Diethelm said this was his first foray into the Land Rover Winter Series since returning to Australia from cruising the world two years ago. “All the people aboard have raced with me at Antigua Week and we loved the day. I’ve sailed around the world and raced in various places, but the CYC has the best program in the world,” ended Diethelm, who has crossed the Atlantic 13 times.

Sumatra got the better of the Salona 45, Zora (Pacific Sailing School) and Rum Jungle a Swarbrick 40 campaigned by the ‘Lost Boys’ syndicate.

Peter Messenger steered John Messenger’s Utopia to a scratch win in the Sydney 38 Division, finishing third overall in the handicap stakes, but just seconds separated the top three, including winner TSA Management (Tony Levett) and second placed The Goat (Mitchell Gordon). In fact, there was two seconds only between the top two.

Peter Messenger commented: “It’s great having the Sydney 38 division back. It means it all comes down to crew work and that makes it exciting racing. Next (Richard Holstein) was looking good, but broke its steering on the first spinnaker run and retired. From there, it was neck-and-neck with TSA Management and The Goat and then we slowly inched our way away from them in wind that was in and out all day.

“My 15-month old godson, Hugh Sabey, was aboard. He only cried after we crossed the finish line – I think he wanted to keep sailing,” Messenger finished, laughing.

Karen Hawkett and Brett Pearce sailed their Hanse 350, La Niche, to victory over Paul O’Connell’s Katinka and Bill Mirrow’s Privateer in Division K. Hawkett and Pearce scored the daily double when they were drawn to receive a lift stand launch and two free lay days, kindly donated by the Noakes Group.

“This is the first race on our new boat,” Hawkett said. Phil Thompson (a former CYCA Sailing Manager) joined us for the race. He hasn’t been too well, but he was firing on all fours. He reckons he’s lost his touch, but he hasn’t – he was in great form.

“Phil loved every minute of the race and we loved having him along,” said Hawkett of Thompson, who along with her husband and co-owner Brett Pearce sailed with Division A1 winner, David Pescud, to a record-breaking Around Australia Race in 2003.

Race 2 of the Land Rover Winter Series will be held next Sunday starting from 11.25am, when the Sydney 38 fleet starts, followed by the bulk of the fleet from 11.30am.