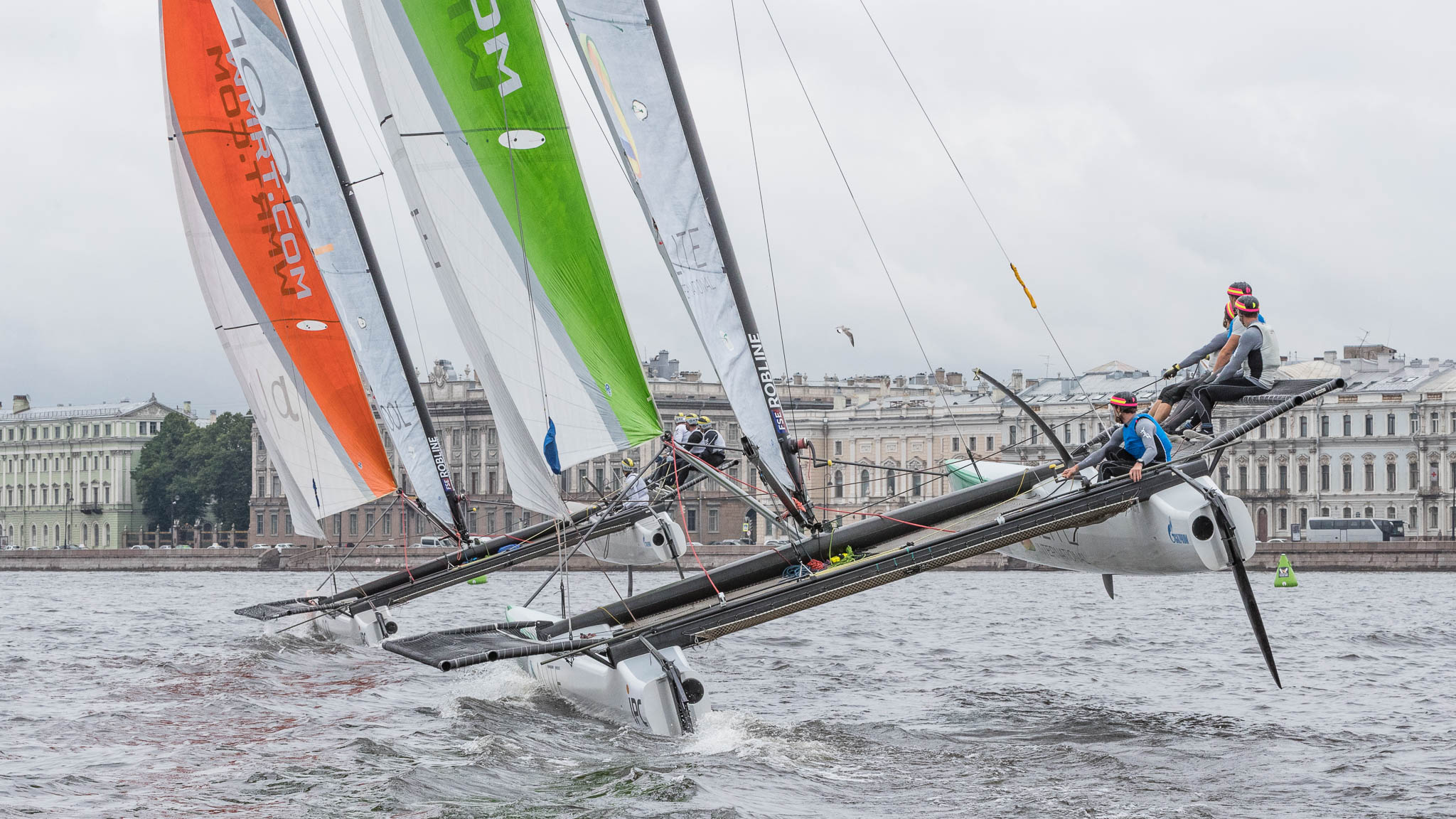 Russians say you need some luck on the Neva River, and not just when sailing cats, but even with the vagaries of format, wind and currents, the cream rose to the top today as the SUPER 16 became eight in the WMRT Match Cup Russia in St. Petersburg.

“It’s great to be back on the beach, it’s what these boats were half-designed for” a confident Phil Robertson (CHINAone Ningbo) said, before heading out to overturn his 2-1 deficit to Australia’s Steve Thomas (RPM Racing) from the day before in almost the opposite conditions to the big winds and chop in Neva Bay on Thursday.

Conditions were tricky, especially with a southerly wind on this stretch of the River Neva. It was very shifty and puffy. The current is also a big factor, and can be as much as 3 knots.

The M32s took it all in their stride and looked spectacular in the heart of St. Petersburg launching off the beach at the foot of the walls of the Peter and Paul Fortress, with the Winter Palace and Hermitage Museum to the south, Vasilievsky Island to the west, and the sailing so close to shore that spectators did not miss a beat.

New Zealander Robertson and his crew had sailed here three times before and made it look like their own backyard as they scored two wire-to-wire victories to win 3-2 having been 2-0 down. It was a mark of their excellence that unlike most other teams, they never stalled.

“Stevie put up a good fight, so we’re pretty pleased to come back from 2-0 down, but more relieved than anything,” Robertson said.

His team’s skill could not have been emphasised faster on the water as Pieter-Jan Postma was not such a “Flying Dutchman” as he parked up seven seconds before the start line and lost his second race against unseeded Swede Kim Kling. Postma prevailed 2-1 – races were reduced to around 6 minutes and it was first to two, rather than three to allow time to complete the SUPER 16.

But he will have to learn fast because he is facing Robertson, the Match Racing World Champion and favourite, in the quarter-finals tomorrow.

“There was 1-2 knots of current, but that’s huge when you only have 5 knots of wind,” Guichard, a multihull specialist over every distance from around the world to around cans, said. “It was especially downwind when it really gusts. I watched people struggle with that. You have to sail a bit higher with that current. In multihulls you need to generate your own apparent wind.”

Guichard will face one of Perth’s many young fliers, Sam Gilmour (Neptune Racing) who also won 2-0 against America’s Markus Edegran with a slick crew display. Guichard and Gilmour met in both Match Cup Australia in March and GKSS Match Cup Sweden, with the French skipper, Guichard, winning both times.

He will face Denmark’s Jonas Warrer (Aarhus Innovator) who came from a race down to beat Sweden’s Nicklas Dackhammar, who had finished above Warrer in the group fleet race qualifiers, 2-1. Warrer lost all three starts – it was a problem in the fleet racing too – but made up for it with positioning, boat speed and slicker manoeuvres in some of the tightest races of the day.

Matt Jerwood (Redline Racing) was the only skipper not on the water after beating Sally Barkow on Thursday, and he had to watch another close match to see who he would face.

Sweden’s Måns Holmberg (Gothenburg Racing) came from behind to break local hearts by beating Russia’s Viktor Serezhkin (Gazprom Team Russia) 2-1. In a match that had two collisions more see-sawing than a children’s playground, Holmberg charged back in the last race, getting the puff after a penalty could have sunk a lesser team.

The quarter-finals will start at 10:00 (local time, 07:00 UTC) on Saturday with more favourable south-westerly winds of 9-11 knots, gusting 14 forecast.

Lucky for Postma learning fast is what he does. He has progressed with breathtaking speed after making his debut on the tour this year, taking the unusual path from Olympic Finn sailing. Postma got the better of Robertson in the Group fleet racing, so there will be extra edge tomorrow.

Yann Guichard (Spindrift Racing) got a taste of the current too. As the top seed from qualifying he faced Poland’s Lukasz Wosinski (Delphia Sailing Team), who completed his 2-0 victory in the second Sail-Off and then promptly hooked a buoy marker in the pre-start and gave Guichard their first race. Wosinski won the start in the second race only to stall and rolled by Guichard sailing round the final mark.