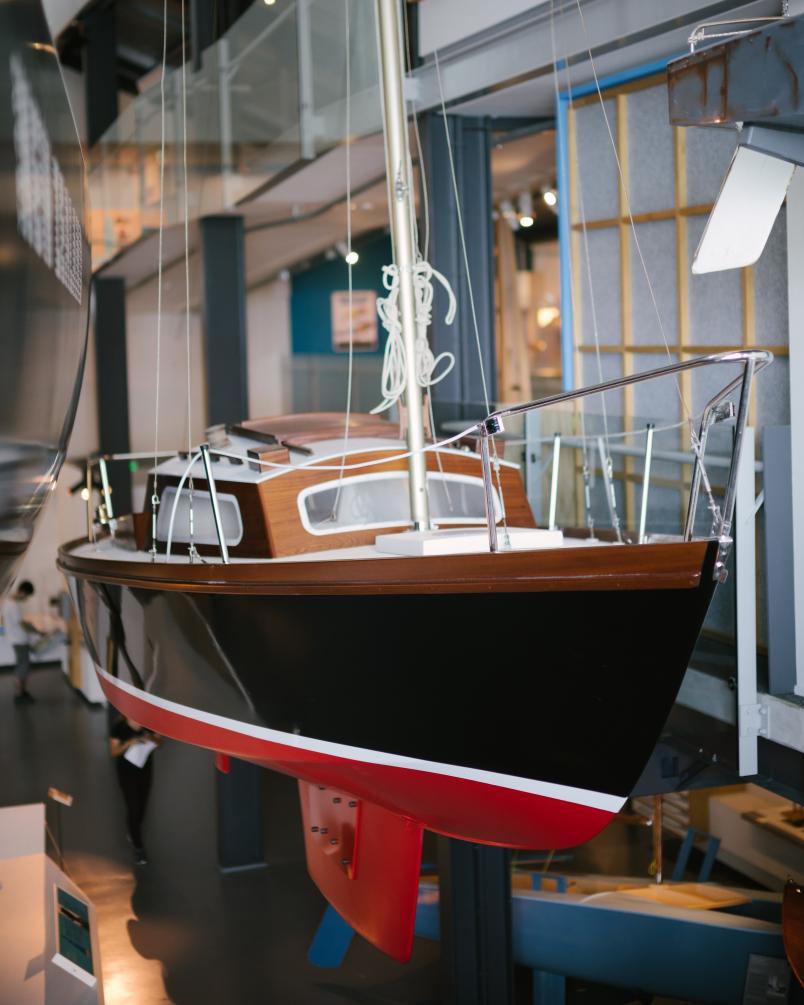 BANDIT, the first boat built by Sir Peter Blake more than 50 years ago, has been restored to its former glory and is now permanently on display at the New Zealand Maritime Museum.

Sir Peter, then 17, and his brother Tony started building the keelboat in 1966 in the backyard of their family home in Bayswater, with help from good friend Crawford Duncan.

At just 7m in length, BANDIT may be small, but she is a big part of New Zealand’s maritime history, as building and sailing the boat was how Sir Peter learned his craft.

His 30-year career as the world’s most celebrated yachtsman saw him circumnavigate the globe six times, defend the America’s Cup in 1995 and head ecological expeditions from the Antarctic to the Amazon.

Bruce Tantrum of the Classic Yacht Charitable Trust, who discovered BANDIT in a shed in Warkworth in 2013, says the Maritime Museum’s Blue Water Black Magic gallery is the ideal place for BANDIT to be on display alongside other iconic Sir Peter memorabilia.

“Having Blake’s first keelboat next to Black Magic, which represents one of the greatest achievements of his career, it’s like a little duckling alongside its mother duck,” says Tantrum.

Sir Peter Blake’s wife Lady Pippa Blake, who saw the restored boat last year when she was visiting New Zealand for the Volvo Ocean Race, is delighted with the restoration and excited for boating enthusiasts to see the vessel for the first time.

“Although BANDIT was before my time, she always seemed to be there,” she said. “Peter often talked about her and looked back very fondly on those days. That boat meant a lot to him.

“Having BANDIT next to Black Magic at the Maritime Museum is a wonderful tribute to Peter and his brother.”

The building of BANDIT was a true DIY project and it wasn’t all smooth sailing. At one stage during the two-year build, molten lead leaked all over the Blake family lawn, after the iron bath tub being used to melt the keel cracked.

Upon completion, the three young men spent the summer of 1968 sailing and racing her on the Hauraki Gulf. BANDIT went on to compete in the 1968-69 racing season with Peter, Tony and Crawford winning the Akarana Junior Offshore Group Championship.

Despite often being the smallest boat in the offshore racing fleets, she was able to attain a speed of 15 knots. BANDIT was retired from the water following its racing years.

It was Tantrum who started the restoration process of BANDIT after meeting with Viv Wyatt who had acquired BANDIT in the late '90s and kept the boat in Warkworth. Wyatt gifted BANDIT to the Classic Yacht Charitable Trust which paid a token sum of 20 cents to complete the transfer.

After 14 years in storage, the yacht has been completely restored by Yachting Developments in Hobsonville over a two-year period, using as much of the original rigging, fittings and sails as possible.

Ian Cook, superyacht builder and owner of Yachting Developments, says given the craftsmanship and finishing of BANDIT it was remarkable it was built at the Blake family home.

“Some of the apprentices involved in the restoration were amazed they were able to achieve what they did in their parents’ backyard,” Cook said. “What Peter, Tony and Crawford created with BANDIT was the start of a legacy that inspired many young New Zealanders to get into boating. It represents the beginning of a journey which shows that if you dream you can achieve great things.”

BANDIT was donated to the New Zealand Maritime Museum in 2018 where she is on permanent display next to NZL 32 (Black Magic) which Sir Peter sailed to victory at the 1995 America’s Cup.

Along with donations from Sir Peter’s friends, family and associates, the $42,000 restoration was made possible thanks to an arrangement between Tantrum and Cook. In exchange for the restoration work, Tantrum, a model boatbuilder, gifted Cook three model boats.