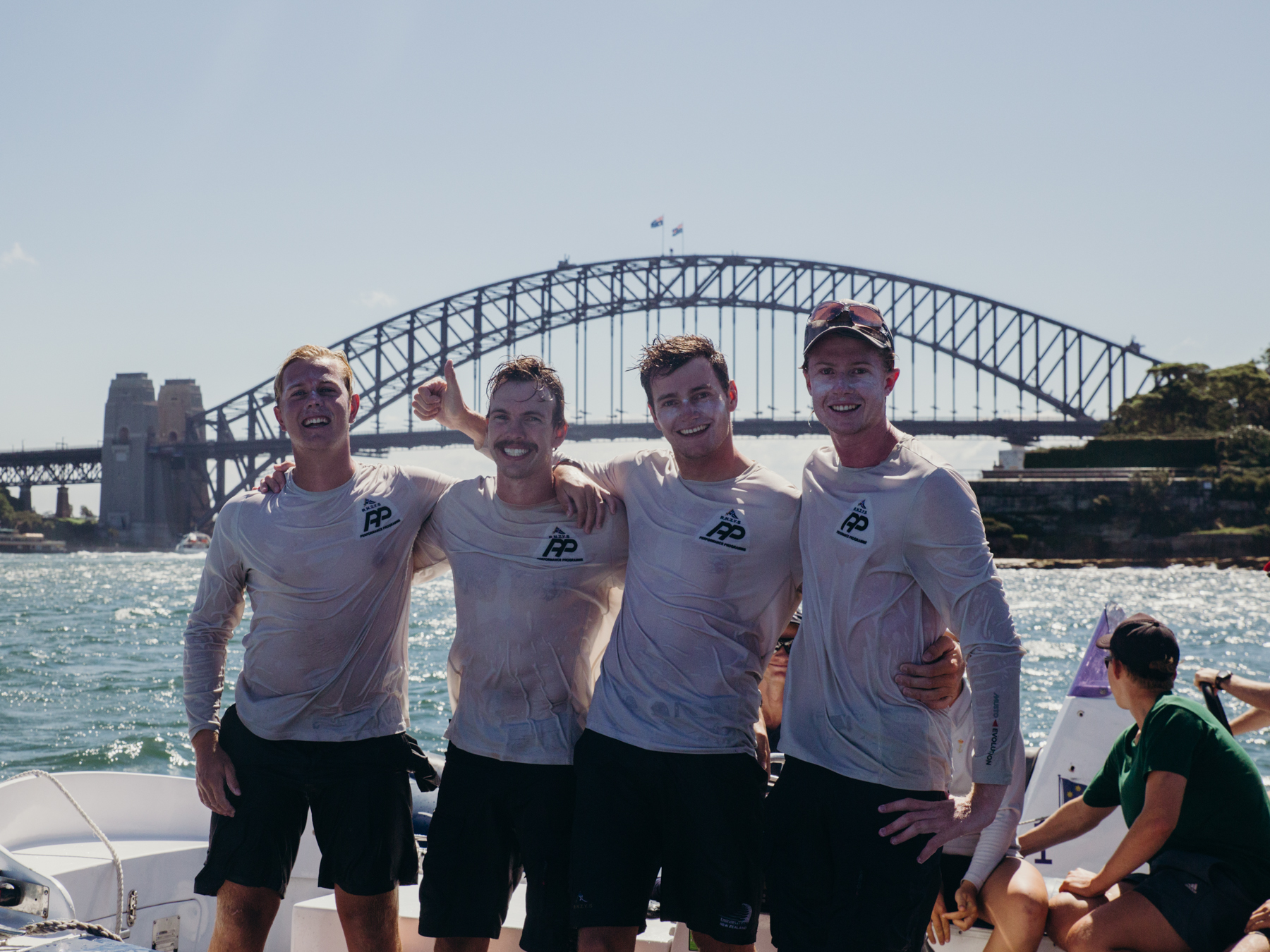 In a classic Sydney summer sea breeze gusting to 20 knots – two Black Hawk choppers cruising the skies and SailGP’s F50s passing impressively by the race track returning to base – the all-international final went to the Kiwis 3 – 0 over the Chris Weis-skippered Del Rey Yacht Club team from California.

“It feels great; the boys sailed really fast today,” Nick Egnot-Johnson said on Thursday February 7 after the traditional celebratory team swim. “It’s one of the top youth match racing regattas, and this was great training in the asymmetric Elliotts before the next two regattas in New Zealand. We found the conditions really shifty – you could have a big lead but Del Rey was always right in it. It’s never over until it’s over. Big thanks to Reuben (Corbett) our coach, our family and friends, and thanks Jacinda (the NZ Prime Minister) for the shout-out at the Warren Jones Regatta in Perth last week!”

In the longer term the grinning skipper admitted “We would like to make the America’s Cup, that’s a big goal for all the boys.”

Speaking from the Royal Sydney Yacht Squadron, runner-up Weis said “I thought it was great competition all-round. I really enjoyed the weather in Sydney and the sailing – we just came up a bit short at the end. I think we did 34 races over four days and the last two days have certainly been long, but it’s easy to dig a little deeper when the standard is so high.”

Egnot-Johnson and his Knots Racing crew came to the annual regatta as favourites and led at the end of the double round robin. The New Zealanders bravely chose James Hodgson from the Cruising Yacht Club of Australia, the next skipper in line on world rankings and the current Australian Open match racing champion, to face-off in semi-final one.

“We regretted picking James for 99% of that last race,” Egnot-Johnson laughed afterwards. “I think I sailed the final downwind with my eyes closed saying Hail Marys and hoping for a puff to get around them.”

That semi went to a sudden death fifth and final flight and Hodgson had the break until the Kiwis hooked into a gust and screamed to the finish. In the closing seconds the two teams engaged in a masterful match racing display which had spectators holding their collective breath and the umpires scrambling, flags at the ready. In the end the CYCA team was left reeling from the late steal.

Hodgson won an aggressive third and final flight in the petite-final against CYCA clubmate Finn Tapper, who lost to Del Rey Yacht Club in their semi-final, to finish third overall from 11 teams, four international and the rest from Sydney and interstate including Darwin Sailing Club and the Derwent Sailing Squadron in Hobart.

Namesake and Patron Sir James Hardy spent the final day of the series with friends watching the thrilling action from his striking 1933-launched classic yacht Nerida.

Meanwhile the Royal Sydney Yacht Squadron is gearing up to host the much-anticipated launch of SailGP, when six foiling F50s take to the harbour February 15 and 16.