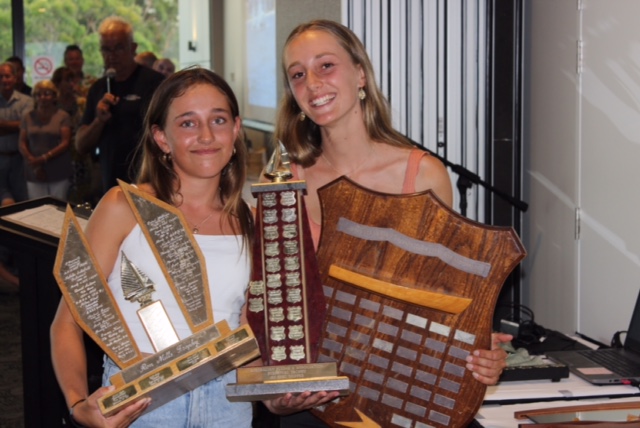 For the first time in the fifty year history of the class, an all girl crew has taken out the Open Australian Championship in the competitive Flying 11 class.

The only other female skipper to have won the open National Championship is Nicky Souter with brother Craig crewing in 2001.

The regatta was held by Port Stephens Amateur Sailing Club in the third week of January. The fleet of 71 boats representing Tasmania, NSW and Queensland completed 11 races in a range of conditions, predominantly strong ENE seabreezes. The girls put together a polished performance, managing to keep a consistent score card, discarding a 7th and a 4th, leaving their results all in the top three.

The racing was very tight between the top four boats, who were all from Manly 16 SSC. On the final day of racing, Jamie and Sam Stodart in ‘Cool Running’ or Alex and Sophie Hart in ‘Fanging’ could have won the regatta by winning the last two races. With steely determination, Zoe and Pearl started the penultimate race midline and used their speed and excellent crew work to control the fleet for a comfortable win, securing them the title with a race to spare.

With both Stodart’s and Hart’s on equal points, pressure was high going into the last race t determine 2nd and 3rd overall. With a classy final race win, Alex and Sophie finished 2nd overall with the Stodart’s in 3rd place.

Other race winners included Sam Skeen and Byron Lowe in ‘Oscar’ from Hornsby Kuringai SC and ‘Schmick’ from Belmont sailed by Cameron Burt and Noah Steenson.

In a nice twist, this is Zoe’s second Nationals win, having crewed for brother Jesse when they won in 2016 also on ‘Nomad’.

PRO Peter ‘Snubby’ Moore did a brilliant job with managing a large fleet over multiple races each day.

Next years Flying 11 Nationals are to be held at RQYS in the third week of January.