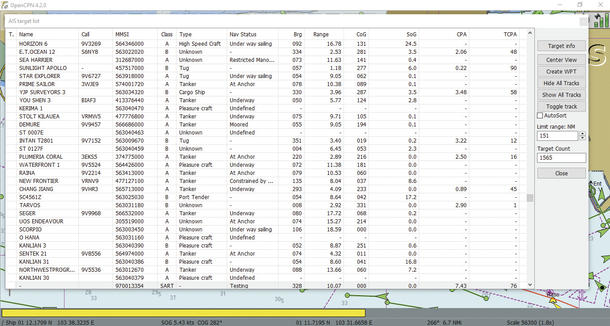 The ‘Wonderful sail 2 Indonesia’ rally was over and we were being checked out of Indonesia at Tanjung Pinang. Once the checkout formalities were finalised and we had the port clearance papers in our hot little hands we had a nice dinner and drinks with the friends we had made on the rally.

During the course of the dinner we discussed the Singapore Strait crossing and finalised our plan before retiring to our vessels for the night. We were all organised though a little sad we had to leave Indonesia the next day, we knew the day was coming but now it was finally here.

Departure day dawned with drizzly rain that soon cleared into a slightly overcast day. There was no reason to rush off because we wanted a little more tide under the keel before proceeding down the long entrance channel then out through the shallow bay. We did have our heart in our mouth when negotiating the narrow channel at low tide on the way in due to the depth or lack of it, we needed to follow the leads tightly to allow us to keep to the centre of the channel. The pilots who bring in the larger boats must have nerves of steel to traverse this bay and channel daily.

We were going to miss being in Indonesia but we were on the way to our next big adventure traversing the west coast of Malaysia. The first step was to set a course to a little island called Palau Nongsa just thirty five miles north from Tanjung Pinang. This little, low island afforded us good protection from the seas for our overnight stop and was the staging point for tackling the Singapore Strait the next day.

For reference, we anchored close in to the island in very good holding at 01°12.2248N 104°04.8838E and, while the water can be a little disturbed due to the current we did have a good sleep. From the anchorage we could see the masts of the vessels tied up in Nongsa Point Marina to the south and the faint outlines of the larger buildings of Singapore through the sea mist to the north west.

Being safely tucked up behind Palau Nongsa we then spent the afternoon looking through the binoculars in awe at the amount of traffic moving through the strait. Even though there is nowhere as much traffic as there once was, it is still a little chaotic moving one third of the world’s shipping through this strait.

We had our chartplotter program running on the laptop and were able to look at the number of ships in the area via the AIS. At one count there was just over fifteen hundred ships, well not just ships but vessels of every kind.

The good thing was that we were able to see that a good deal of the ships were anchored near to the coast of Singapore out of our way for the crossing. The bad news was there were some tugs with tows on the southern side of the strait that we could see but were working without AIS transceivers. This is not the first time we have come across this, we knew that we did need to be very vigilant when we travelled through these waters.

One of the requirements for a yacht visiting Asia is to have a working AIS transceiver. This is definitely a requirement when travelling through Indonesia and Thailand, however we did have mixed information from Singapore. We have been told yachts have been stopped by the authorities if their AIS is not transmitting. Unfortunately, this information of yachts being stopped is second or third-hand and they well may have been stopped because the authorities wanted to find out their intensions in Singapore waters.

We eventually did get a direct answer from Singapore about the requirement for an AIS transceiver and as it turns out it is mandatory for all foreign yachts coming into Singapore to be fitted with an automatic identification system (AIS). Keep in mind the strait is full of police, customs, port authority and naval patrol boats and one hell of a big radar should you get in trouble.

After crossing the shipping lanes we were going to keep out of Singapore waters while we travelled outside the traffic separation scheme lanes on our way to the Straits of Johore. See breakout box: Waypoints.

So the big day arrived and after hauling anchor at first light we were off to our first waypoint on the southern side of the traffic separation lanes. On the way we had to negotiate small fishing boats, tugs, emergency service vessels, anchored vessels and the odd beacon and rock. Nothing too stressful, we actually enjoyed a bit of a sail as we travelled along the southern border of the traffic separation lanes. When we neared the crossing point we furled the head sail and dropped the main because you are not allowed to sail across the strait, with everything in order we checked the lanes as one would do when crossing the road. Looking left, right then left and right again, another look at the AIS targets and we worked out this was going to be a painless experience. Even though the AIS target list showed well over fifteen hundred vessels there was a gap in the traffic, a vessel constrained by draft had just past and was moving slowly (10 Knots) we had a clear spot and off we went. Looking at the chart plotter it was funny to see the group we were traveling in convoy with all started the crossing and we looked like ducks in a line. The crossing didn’t take long and then once across we turned to the west and settled in for the run down to Raffles Lighthouse that sat on a pretty palm covered island. One of the vessels following behind us strayed into Singapore waters trying to take a short cut and was immediately challenged and asked what was his intensions were.

The run to the west was fairly easy, while there were vessels traveling on the outside of the traffic lanes we didn’t have any problems and we either passed port to port or at their instigation after a radio call we passed on their starboard side. While traveling in these waters and I would say any waters you need to be careful when relaying your intensions over the VHF, we believe there have been numerous VHF aided collisions due to the misinterpretation of instructions. Just keep it simple and stay out of the way of big ships, take note of whether they are indeed doing what they said they were going to do.

We were booked into Puteri Harbour Marina Malaysia. This is a marina complex on the southern end of Malaysia just over the Straits of Johore from Singapore. The “Pilot Western A boarding ground” was our turning point into the Straits of Johore, this is a very busy place with lots going on, there are tugs carting sand retrieved from the numerous vessels dredging near the entrance. The sand is being deposited on the shore in a sea reclamation project. Due to it being so busy we did have to keep a good look out and this is where the AIS comes into its own. We were able to see a dredge was about to come from behind a moored vessel that shielded it from both our vision and the radar. We were able to take evasive action well before a close quarters situation arose. After we passed through the anchored vessels and were into the in the Strait of Johor proper there was only a couple of well-beaconed shoals and a bridge with a clearance of 25 metres to negotiate and of course we kept to the northern side of the Strait due to the border with Singapore. There are patrol boats guarding this strait so give them a friendly wave and a wide berth. The bridge clearance is not marked on all charts properly, some only show a clearance of four metres. This bridge should not be confused with the causeway which you certainly cannot fit a sailing vessel under.

We did not check our vessel into Singapore so I will not go into check-in details, if you are planning to check into Singapore there are instructions online for the different marinas, or have them email you the instructions. We checked into Malaysia and the check-in procedure was painless and was handled by the great staff at the marina for a small fee.

A note crossing the Strait: you are not allowed to sail across the strait, and when crossing you need to keep the vessel pointing at ninety degrees to the lane, this is a requirement, and you are not to take drift into consideration.

As it turned out the crossing was not as bad as we were lead to believe and anyone who can negotiate Moreton Bay or Sydney Harbour on a busy Sunday afternoon should not have any problems. The key to a successful crossing is not to do it in poor visibility or at night. Keep to the rules and treat it like a bar crossing make sure there are no loose lines to go over the side and tangle the propeller. Have sufficient fuel for the trip and last but not least keep a good look out by every means you have. ≈