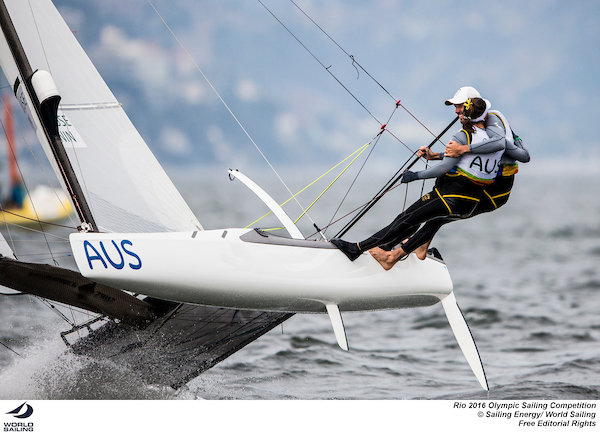 The Australian cousins Jason Waterhouse and Lisa Darmanin were in fourth place going into the Nacra medal race at Rio 2016. They were nine points out of Gold but only four behind Silver.

However their medal chances weren't helped at the start when Ben Saxton and Nicola Groves (GBR) fouled them. The Brits did a penalty turn but the rest of the fleet was racing away up the beat.

They Aussies recovered well and, flying across the course on port, almost crossed the leading boats but were forced to tack on to starboard and join the drag race.

At the top mark, only the Kiwi pair of Gemma Jones and Jason Saunders were around before the Aussies, who came in on port and slipped in front of Brazil. The leading pair going into the medal race, Sante Lange and Cecelia Saroli (ARG), were in last place and the Italians, who started four points ahead of the Australians were ninth.

On the second beat the Kiwis and Aussies extended their lead but Argentina moved up to sixth. Lange is an experienced old campaigner, with two sons competitng at the Games in the 49er, and he was not going to panic.

By the mark, New Zealand was 20 seconds ahead of Australia with Austria in third and Argentina in fourth. We heard a call of “penalty on Argentina” but they didn't hear it until halfway down the run. They furiously dropped their kite and did the turn.

Hearts in mouths, the Aussie crowd waited anxiously as first one and then another boat swept past. At the finish it was New Zealand 1st, Australia 2nd, Austria 3rd, USA 4th, France 5th… and Argentina sixth, giving them the win by a single point. It was a very tight contest, with Australia winning Silver on a countback from Austria.

Any medal was cause for celebration and Jason and Lisa hugged each other as they crossed the line.

When asked how they felt, Lisa said it was bitter sweet. “We really wanted that Gold.”

However, as Jason commented, they gave their all. “We couldn't have done more. We sailed a great medal race. I think it's the best medal race I've ever sailed.”

Referring to the three Silvers that Australia has won in the multihull classes at previous Olympics, Lisa said,”Obviously Australia has a great multihull background. They're all legends to us and they're all silver medalists and to be part of that group is a bit surreal.”

Referring to Santiago Lange, the man who had beaten them, Jason said: “He's a living legend, he's 56-years-old, he's paid his dues and he's a great man. He sailed a great race and really deserved his win.”

A journalist asked them what they would do now, thinking of celebrations with family and friends. With a grin Jason replied, “Tokyo, right?”