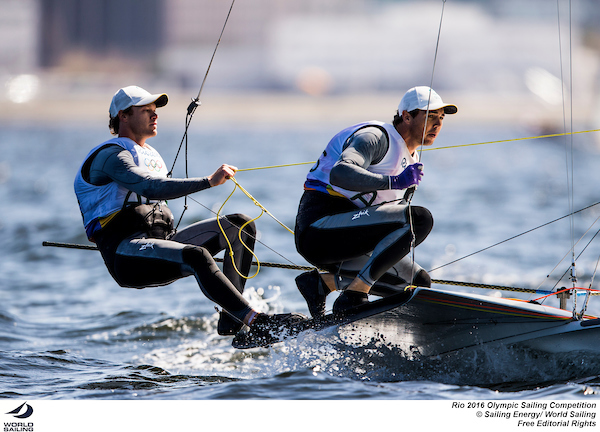 Despite the very light conditions inshore that caused the postponement of the Laser final, there was just enough breeze out in the Atlantic Ocean to sail three races in the 49er and 49erFX. For Kiwi superstars Peter Burling and Blair Tuke, that was good news as they increased their lead to an almost insurmountable 18 points with results of 2,3,1.

Australians Nathan Outteridge and Iain Jensen didn't have a bad day, with 4,5,8 and moved into third place, but it seems inevitable that the defense of their Olympic crown is over. Germany sits in second on 39 points, now 15 points clear of the Aussies.

It was a day when there were splits in the fleet but as usual the Kiwis were always on the correct side. Outteridge tried to pull places back by splitting from the leaders and at times it worked. But overall, the Kiwis were in total control.

The womens' 49erFX sailed three races today and places changed regularly as crews had good races followed by bad ones.

The stand-out team was the Spanish pair of Tamara Echegoyen and Berta Moro who went 4,1,1 to lead the table with three races to sail in the qualifying series. They are on 30 points.

Kiwis Alex Moloney and Molly Meech stayed in touch despite a 12th in the second race, which became their drop. They are four points behind the Spaniards and one point ahead of the Brazilian crew which is steered by Martine Grael, daughter of the legend, Torben Grael. She and Kahana Kunze led the stadings after the second race today but recorded an 11th in the last to drop back into third.