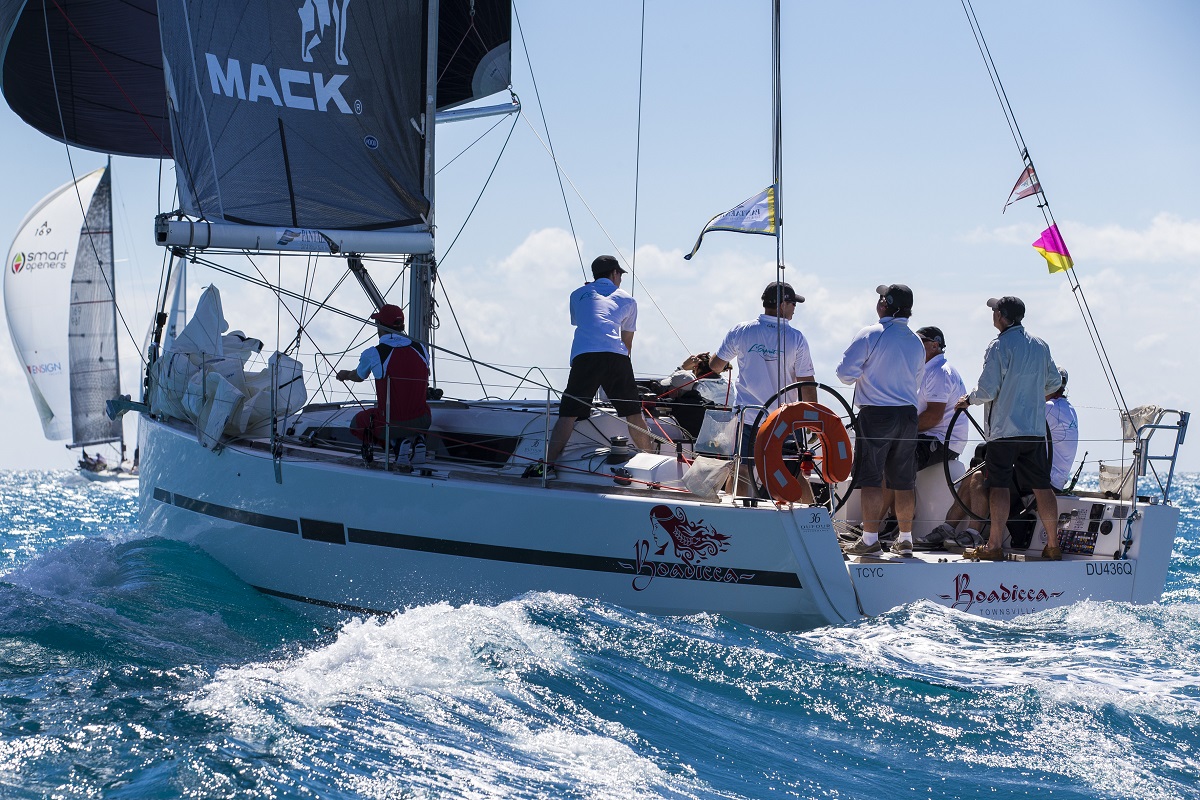 The best day yet at Whitsunday Sailing Club’s signature event, Airlie Beach Race Week, as trade winds strengthened to north of 18 knots, allowing yachties to enjoy a day of pressured up but pleasant conditions.

While the sports boats contested three windward/leeward races on the bay, the remainder sailed a longer passage race to the north-west from Airlie Beach. Graham Sherring’s Retuned scored a win in the final race of the day to continue her lead over Rees Howell’s Octopussy.

In the good old days, Cruising was a gentlemanly pursuit, normally a docile bunch. But times have changed. Their starts at this regatta can only be described as Argy bargy and loud, pushing their way in at the start any way they could.

Loud shouts of “get up,” could be heard, along with the occasional curse word, as they each fought for position at the start. Eventually calm was restored, but it was a sight to behold and made for riveting viewing.

‘Dr Darryl’ said it was like lining up with a grand prix fleet, such was the aggression at the start. “Beware the rest of the fleet,” he said.

“But we’re having a ball – I don’t think I’ve ever experienced better sailing. Three days of perfect sailing. Today was best of all,” said Hodgkinson who has sailed all the majors in Australia and major regattas overseas.

The Sydney plastic surgeon is chuffed his fellow surgeons from overseas could join him and experience what they have the past three days: “One came from Germany and the other from Austria. How to impress your friends – this is how, but I must say we are looking forward to the lay day, it’s been full-on.”

In Cruising Division 3, a son has upstaged his father, Ross Chisholm, who happens to be the Principal Race Officer for the event. Scott Chisholm made the right decision to leave Melbourne for Airlie Beach and borrow Ross’ boat, Trivial Pursuit, “To have a bit of fun,” Scott said.

However, he finds himself in the series lead by one point from Tristram Denyer’s Iseulta, with Alan Sneddon’s Pacific Phoenix a further two points away in third place.

“It was a good opportunity to have a holiday, catch up with family and enjoy some sunshine,” said Scott. “The racing has been better than expected. The crew came together at the last minute, so the results are a bonus.

“Today we saw gusts of 22 and 23 knots when we were under kite, but survived it. Racing to the finish to windward, the sea was quite choppy. It’s been close racing. We’re seeing Serenity (John Fowell) and Mistery (Bill Hopton) time and time again – can’t shake them.

Scott agreed he was reluctant to tell his father about damages – and leading. “It hurts his pocket and his pride,” he said laughing.

Behind them, the smaller Cruising Non-Spinnaker division was well behaved, but then came the turn of the Trailer Boats and peace was shattered again. When you are contesting a National title, it’s ‘take no prisoners’.

It did not help that Roger Guest’s Ross 780e, Il Aquarii, stalled just after the start, right next to the barge mark, causing chaos and a few outbursts. Scary stuff.

The Multihull Passage boats were well behaved at their start, and David Davenport’s Misty Sea, the series leader after three races, topped the scoreboard today to take a three-point series advantage over Jack Pemberton’s Urippa. Michael Meehan’s Play On, is just a further point adrift.

In other divisions, Karl Kwok’s Beau Geste continued her winning streak in IRC Racing to maintain a clean slate and Ray Roberts Team Hollywood continues to lead IRC Passage. In the Trailable Nationals, Jason Ruckert has kept Mister Magoo in the lead and the same applies in the Multihull Racing Division, where Tony Considine’s APC Mad Max, skippered by George Owen, scored her fourth victory.