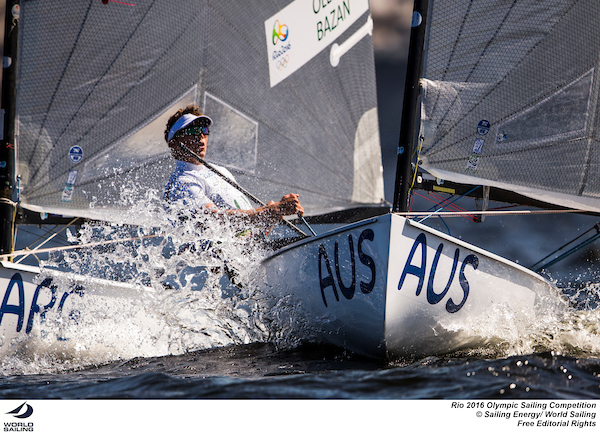 Australian Jake Lilley said yesterday, when he held third position in the Finn fleet, that he wasn't thinking about medals with two qualifiers to race. Unfortunately, in the shifty conditions today he was always in the wrong place and finished in equal 10th and misses the medal race on a countback.

At the head of the fleet it was all Britain's Giles Scott, ranked second in the world before London 2012 but forced to watch from the sidelines because Olympic legend Ben Ainslie had the British spot. At his first Olympics he has smashed the fleet to hold an insumountable 24 point lead ahead of Tuesday's medal race.

He had an eighth place in the first race today but followed it with a second in the last race of the qualifying series. Although he has won only three of the ten races, his consistency while all others have been up-and-down has been the deciding factor.

Vasilij Zbogar has a strong hold on the Silver with a 13 point buffer to Ivan Gaspic of Croatia. Caleb Paine (USA) and Max Salminen (SWE) have the potential to win Bronze as they are just five points back.

From an Australian persepective it has been a disappointing day all round, but we feel most for Jake Lilley who has worked so hard, just to fall short on the last day of qualifying.

Although obviously shattered by the day's events, he was very amture in his interview with the press. He conceded that light breeze with a lot of remnant swell was a weakness of his “but not as weak as the points show”.

Looking ahead positively, he said, “I've got four years to think about it all now.”