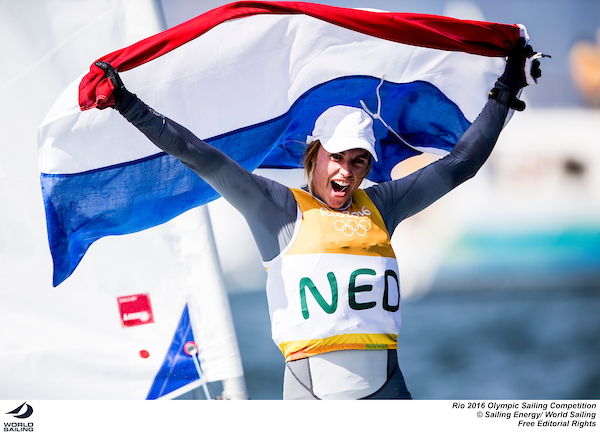 Going into the Laser Radial medal race at Rio 2016, London Silver medalist Marit Bouwmeester was in a strong position. She had finished the qualifying series of 10 races on 47 points, eight clear of second-placed Anne-Marie Rindom of Denmark. That meant Rindom needed to put five boats between her and the Dutch woman to beat her.

Annalise Murphy of Ireland, the woman who tragically missed out on a medal in the four boat shoot-out in Weymouth, was a further two points behind, meaning she had to beat Bouwmeester by six boats to win Gold but just needed to beat Rindom to take the Silver. Her challenge was not to allow London Bronze medalist Evi van Acker of Belgium to get five boats ahead, in which case Murphy would lose the Bronze.

The wind was blowing a reasonable 8 to 12 knots from the SSE as the women launched their boats on to the Pao de Acucar (Sugarloaf) course. A troupe of Brazillian dancers entertained the large crowd watching from the ticket-only section of the beach. On the start boat, race officials anxiously scanned the wind metres and double- and triple-checked the top mark.

None of the leading contenders wanted any trouble so they all set up away from the boat end. Evi van Acker at the pin end did a penalty turn right after the start. Bouwmeester and Murphy were looking good mid-fleet and side-by-side, with Rindom in a controlling windward position.

Josefin Olsson (SWE) went almost to the layline on the left of the course and the move paid dividends as she carried stronger pressure in towards the mark. She rounded nine seconds ahead of Murphy and 19 ahead of Alison Young (GBR) with Rindom and Bouwmeester a few seconds further behind. Ashleigh Stoddart (AUS) was eighth.

Downwind in the light breeze the Lasers were struggling to reach 5 knots, with the sailors anxiously scanning the water to check their competitors and any increase in pressure.

At the gate Olsson had stretched her lead to nearly 30 seconds over Murphy, Gintare Scheidt, Bouwmeester, Rindom and van Acker, in that order. Stoddart remained in eighth behind Young, despite the Brit having to do penalty turns for pumping.

Upwind for the second time everyone wanted the middle track and positions ebbed and flowed.

Again Olsson chose to come in on port from the left side of the course but this time it didn't pay and she was forced to duck Murphy, Young and Scheidt who swept around the mark together. Back in the pack, Marit Bouwmeester was seeing the Gold slip away as she dropped to seventh. If Murphy could win, she would claim the top prize.

A huge gap had opened up, with Ashleigh Stoddart somehow joing the leaders during the mayhem at the mark.

Murphy had one hand on the Gold as she surged into the lead but a late rush saw her spat out at the final gate and she finished fifth across the line, but had her Silver medal.

A relieved Marit Bouwmeester crossed seventh, doing just enough for the Gold, while Rindom took Bronze. Young had won the race from Olssen and Stoddardt, who sailed the race of her life but could not improve on her ninth overall.

Wild scenes of jubilation followed, with women in the water and others hugging their coaches.

It has been an interesting series and the medal winners thoroughly deserved their spot on the podium, having dominated the qualifying series.