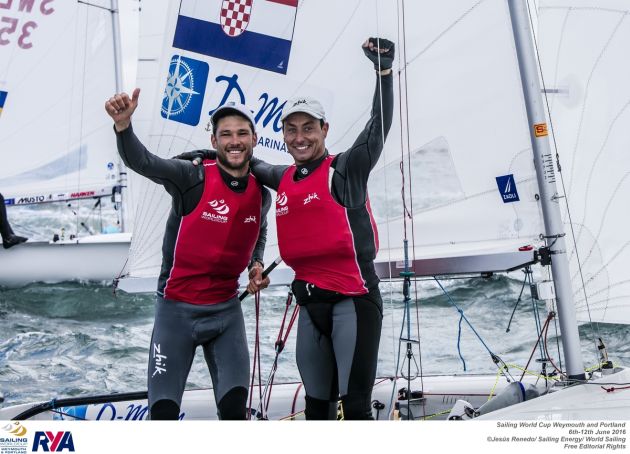 Going into the Men's 470 medal race at Rio 2016, it was obvious that Croatia was going to win its first sailing Gold. On just 27 points after the 10 race qualifying series, Sime Fantela and Igor Marenic held a commanding 11 point lead over Panagiotis Mantis and Pavos Kagialis of Greece. This meant that the Greeks needed to win the race and have the Croatians no higher than 7th.

Defending champion Mat Belcher and crew Will Ryan were two points behind the Greeks. Their equation was that they needed to beat the Greeks to take Silver and win the race and have the Croatians 8th or lower to take Gold.

Mat Belcher made his intentions clear in the pre-start, chasing the Greeks and putting them under pressure. The Australians got a good start and were sailing to windward of both Croatia and Greece as they came back on port towards the beach. The Swiss, on the extreme right-hand side, were the early leaders.

Australia was obviously covering the Greeks while the Croatians were keeping the Aussies under observation. At the top mark Switzerland, USA, France and Sweden all beat the big three, with Croatia three seconds ahead of Australia and Greece two seconds behind them.

Downwind is usually Australia's strength but the Greeks soon ran past them. The Aussies fought back and crossed right in front of Greece. The on-water jury signalled no foul, play on.

Swizerland, USA and France retained the lead but at the back of the pack Australia rounded ahead of Greece and now had New Zealand between them and their rivals. They rounded different gate marks but both went up the left-hand side of the course.

When the Greeks tacked back they passed three boat lengths behind the Aussies and immediately threw another tack, Belcher responded and covered yet again. Greece threw another one, Australia responded and up ahead Croatia threw a loose cover on both of them.

It was like an old-school America's Cup beat, with tack after tack being thrown and answered. Meanwhile the rest of the fleet raced away from them. No-one cared. For the record, it was still Switzerland, USA and France who were first around.

Then disaster struck when Will Ryan fell out of the boat. Belcher helped him back in but the Greeks had escaped and rounded three seconds ahead. It would all come down to the final run.

By halfway down, Belcher had put the Aussie boat on the Greek's transom, then used the extra speed to slip underneath.

Up ahead Switzerland won the race and Croatia won the Gold medal. And finally a poor gybe by the Greeks put the issue beyond doubt. Australia had Silver and Greece had Bronze.

In the water, the Croatians finally showed their emotion, especially when Belcher and Page sailed over to congratulate them. Croatia had her first sailing Gold.

“I feel pleased, I feel great, I feel calm,” Sime Fantela said after the race. “I feel relaxed now after nine days of racing. It was quite tough, we had plenty of challenges but these were the challenges that I said to myself we needed to overtake to achieve the medal.”

On winning Croatia's second Olympic medal in sailing, and his return home: “I think the city will burn. It’s already burning, I think.”

Igor Marenic described winning Gold as “the best feeling in the world”.

“I told him in the last race, 'It is finished now, man, they are behind. We are safe'. He said, 'Let's finish first, then we can celebrate'. Now we can celebrate and it is everything I thought it would be.”

Asked abouthis fall fromthe boat, Will Ryan said, “I just slipped and fell straight in. Obviously Matty pulled me back out of the water one-handed really quickly and got me back in the boat and back into it.”

Mat Belcher commented: “I was worried about the water quality.”
But he added more seriously, “This is just a part of the sport. We’re in really a tight battle and mistakes happen. I think for Will to be able to come back in and refocus straight away shows the level of his ability and our team's ability.
“That really sums up our week. It’s been a difficult week for us, we’ve had a lot of things that we’ve had to overcome and I couldn’t be prouder of Will and our team. To come away with a Silver is a fantastic achievement. We wanted the Gold, but hats off to the Croatians – they sailed a great week and they truly deserved it.”
Full results available here.

FOOTNOTE: Here's one to inspire Opti sailors everywhere. In 1999, Croatia won the Optimist Team Racing Worlds. The team was Sime Fantela, Igor Marenic, Tonci Stipanovic (the man whom Tom Burton beat to take Gold in the Laser yesterday) and Ivan Gaspic, who placed fifth in the Finn at these Games.