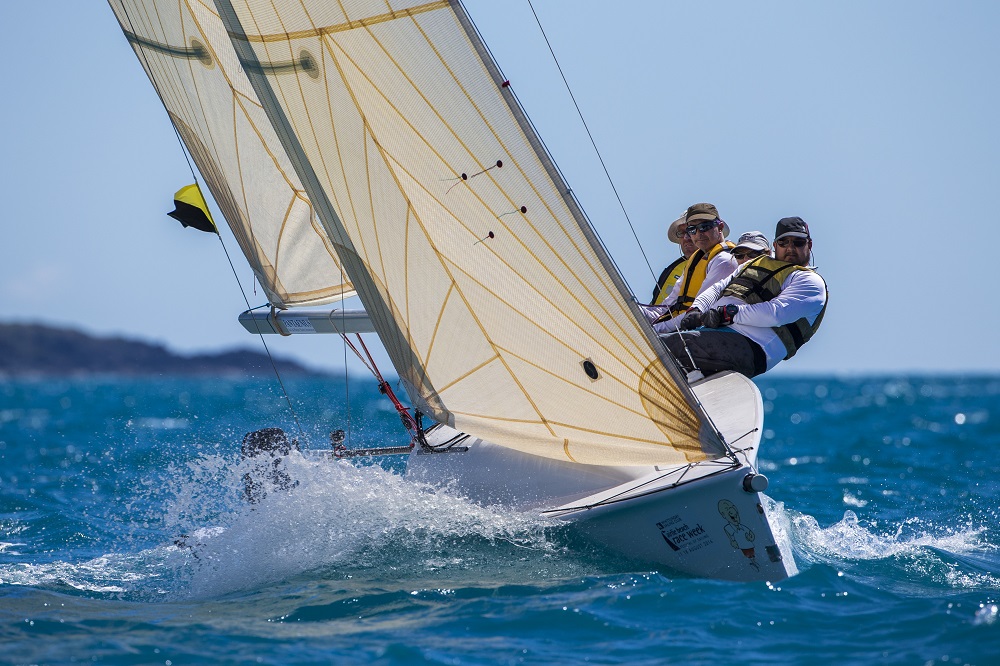 Jason Ruckert has steered his Thompson 7, Mister Magoo into an almost unassailable lead in the Trailer Boat Nationals at the 27th Airlie Beach Race Week, with one day of racing remaining.

Katie II, a Sonata 760 Sports,MK1 owned by Ray Jones, has sailed consistently well, sailing outside the top three only twice, using an uncharacteristic 11th as her race drop. Today Jones finished with the day with a fourth and a pair of third places to maintain second overall.

“It was wild and woolly on the course today,” Ruckert confirmed. “At one stage there was a big gust downwind and we hit 16 knots – not something we usually do on this boat,” he said.

With just one race remaining tomorrow, Ruckert’s scorecard shows four wins and a pair of second places – one of which came from his first race today.

“We hit the top mark, did our penalty turn, then we had a kite stuff up on the drop. They cost us time,” Ruckert explained.

Of their performance, the Queenslander said the starts are playing an important role: “Only a couple of others are up there with us, so it makes it easier to get away. We tend to stay away from the pack start so we stay out of trouble and sail in clear air.”

It helped that some boats were reefed down and others did not set spinnakers today, but Ruckert also credits their performance to crew who have sailed together long term, so know each other and the boat inside out.

“Like Dave (Ward) and I. We’ve sailed together since we were teenagers. He does mainsheet and we don’t even need to talk, we both know what we’re doing.”

A further three points away is Still Crazy, a Blazer 23 owned by Peter Lahey, but skippered by his daughter Sophie, who skippered Tony Horkings’ Lee-Way to first place in IRC Passage last year.

“I stole Dad’s boat for this regatta,” said a laughing Lahey, who is sailing with an all-girl crew, bar one. “Yes, we have one male, and yes, he is on the bow,” she confirmed.

“We’re all dinghy sailors, so windward/leeward races are better for us, and the choppy water and wind suited us too. We sailed for the first time together on this boat the first day of Airlie Beach Race Week, and we’re getting better every day.”

But with Katie II just three points ahead, Lahey said, “The pressure is on for tomorrow’s final race. It’s hard, because Katie II is moored right next to us.”

The Queensland skipper added, “We came here with no expectations, just to have fun. It’s definitely good to be in third place though.”