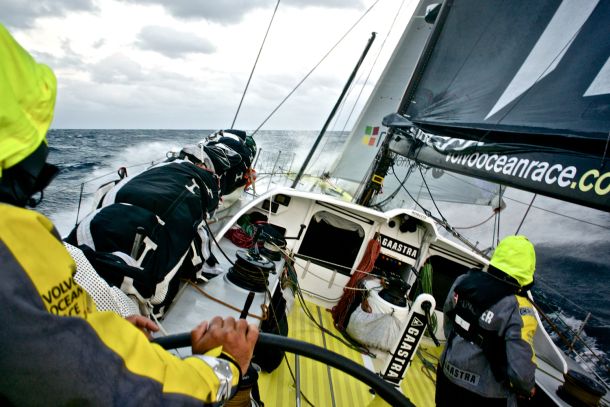 Sickness on board, plus a couple of injuries, have put the crews of the Volvo Ocean Race fleet to the test as they make their way through the Pacific Ocean from Sanya to Auckland on the 5,264-nautical mile Leg 4.

Pablo Arrarte (ESP) has been struggling with the ‘flu' on board Team Brunel (Bouwe Bekking/NED), and Justin Slattery (IRE) has been laid low by a similar virus on Abu Dhabi Ocean Racing (Ian Walker/GBR). However, both are now getting back to full fitness, according to their crews.

Offshore sailors particularly fear sickness at sea since germs can so easily spread among the crew in the confined space.

“This is threatening,” said Jens Delmer (DEN) in a message from Team Brunel, referring to the unfortunate Arrarte’s sickness. “We live in such a small space that something can spread easily to the group.

“Because of the bad food and little sleep, everyone has a super low resistance. This is normally not a problem, because we leave with a sterile boat, and at sea there are no viruses. But if someone brings it on, then we will all be at risk.”

A couple of the sailors have also picked up minor but painful injuries since leaving Sanya on the southernmost point of China on February 8.

Guillermo (‘Willy’) Altadill (ESP) of MAPFRE (Xabi Fernández/ESP) injured his hand and needed it to be bandaged up.

And Gerd-Jan Poortman (NED) ruptured his eardrum and suffered bruising to his arm and side after being washed into a dagger board on Team Brunel.

Both sailors are also reported by their crews to be back on the mend.

Although the Dutch boat was effectively a man down for a couple of days because of Arrarte’s illness, Team Brunel have established a strong position at the head of the fleet after gambling on a more northerly route along with Team SCA early in the leg.

The gamble paid off with stronger winds that propelled Bekking’s team into a near 100nm lead on Monday, but by Tuesday at 1240 UTC, that had been whittled back to 37.4nm by the chasing pack led by Abu Dhabi Ocean Racing (Ian Walker/GBR).

MAPFRE, which has been without full communications with Race Control since the weekend, is still holding on to third spot despite missing weather data to help them plot their course.

Team SCA (Sam Davies/GBR) were still at the rear of the fleet, 94.3nm adrift of Team Brunel, after failing to make similar gains.