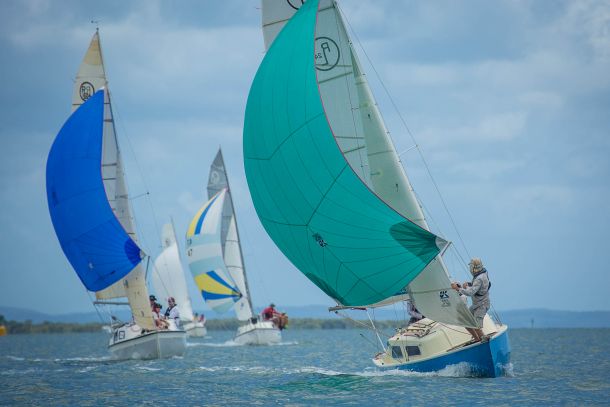 Few national sailing championships cater for three generations from five up to 70 plus year-olds and provide a setting where women and young teenage skippers feel equally comfortable on the tiller competing on the same race track as the blokes.

This is the scenario at the annual RL24 Australian Championship, the one time of year when the active fleet travel to the host state as much for the social gathering as the on-water showdown. They might appear a slightly daggy but kindly retro bunch of yachties, but when the gun goes the shouting starts just like in any high level fleet.

Essential to the continuation of the RL24 trailer sailer class that was designed by Rob Legg based on the Flying Dutchman design and first launched in 1973 is the ‘F’ factor. Not just fun and fast, but FAMILY!

Multiple family combinations either fully or partly crewed at least a third the fleet of 17 RLs at the class’ nationals held at the Royal Queensland Yacht Squadron in January over four days. Two of the top three placed skippers had at least one other immediate family member on their crew; on the runner-up, dad and three adult sons combined to produce excellent results.

But it was skipper Simon Walsh and his Ohau-Rua crew representing Lake Wellington Yacht Club who again proved unbeatable, winning all seven races. For the 18th time Walsh, a major Flying 15 talent back in the 80s, was declared Australian RL24 champion in a boat he’s developed over four decades. Since he began sailing with his dad on the very same boat in the mid-70s.

Some say the RL24 is the missing link. Those who race them appreciate they are a quick and cost-effective development boat, and that Walsh, an aircraft maintenance engineer (helicopters) with a knack and the tools for engineering, is at the forefront.

The first of Ohau-Rua’s three masts was a straight section with diamonds and a backstay, followed by a tapered section with a backstay and finally a gold spar with swept back spreaders and no backstay.

As for keels, Ohau-Rua started life as a swing keel then was converted to a drop keel using a helicopter rotor blade, which corroded away. Then followed a new drop keel made at home in the shed, including casting the lead shoe, then two more drop keels cast at home. The current one did have a bulb but it was removed and a lead keel extension fabricated.

With these modifications plus Walsh and his top quality crew making minimal errors around the course, they are supremely hard to catch.

Darren Dyer’s fourth overall in the combined swing and drop keel results with his RL24 Whatever was enough for Victoria to firm up the teams trophy.

Tidal flow and chop on Moreton Bay added an interesting dynamic to the series and caught some unawares. Being summer the weather was subtropical and therefore changeable, winds starting out in the 15-17 knot range and squally with showers. By the end of the week the sun was out and the breeze light out of the south east.

A midweek layday gave crews time for maintenance or to take the family to one of the many ‘worlds’ fun parks nearby. The epitome of the class is that most crews opted to camp side by side on the RQYS’ vast grounds, and each afternoon the kids and teenagers and sometimes an old person (over 25) would meet on the lawn for an epic soccer match until well after dark.

At the final presentation of trophies the group was treated to an impromptu presentation on his Road to Rio by Australia’s highest ranked Finn sailor, Jake Lilley, who was cornered while rigging up for a training session and generously agreed to speak and pose for photos with a new batch of young fans.

Funny moments included Walsh sharing the story of his family connection to the moniker Ohau-Rua (Maori for place of big wind) and Mick “I hate Facebook and Twitter and all that stuff’ Shannon getting excited that a short interview with him posted to Facebook had attracted more than 700 views in 24hrs – a figure he believed put him in the league of Kim Kardashian’s bum.

The Ratcliff family of five were named back-to-back winners of the Toad Trophy for conclusive consistency (read silliness) – this time for their brand new jib blowing off RQ’s marina and sinking. Not since it was first presented back in 1978 has the plastic toad mounted on a wooden base been awarded to the same crew two years in a row.

RL24 class President Wayne summarised the nationals, “What a beaut titles at RQYS at Manly. Great sailing conditions, excellent facilities with great club reps and staff and perfectly organised race officials. As predicted there was great racing right through the fleet and heaps of opportunities for boat development.”

Designed by Legg with more than 500 sold, the RL24 is still Australia’s most popular trailer sailer. Through a passionate owner-run association it maintains an active east coast racing fleet concentrated around the lakes districts of Victoria, in Sydney and a bunch of Brisbane coastal racers and cruisers who hone their skills on passage races.

Now in his early 80s, Legg still follows the fleet and was delighted to receive a visit from Wayne and his wife Gretta on their way north to Brisbane in early January towing their much loved and well-travelled Spiral Navigator. “Visiting Rob was pretty inspirational, he’s been a progressive thinker and into ideas and adventure all his life,” commented the class President.

The venue for the 2016 RL24 Australian Championship is yet to be announced.