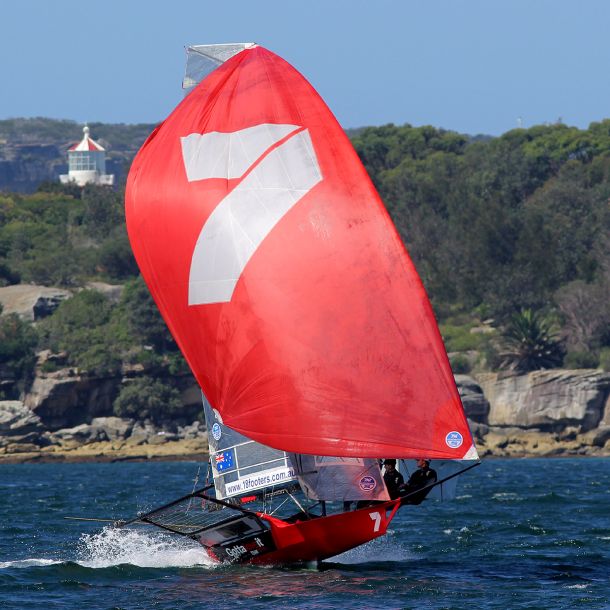 Another awesome display by the defending champion Gotta Love It 7 crew has given the team a massive lead after Race 4 of the 2015 JJ Giltinan 18ft Skiff Championship on Sydney Harbour today.

Seve Jarvin, Sam Newton and Scott Babbage again gave an immaculate exhibition of power sailing to virtually destroy a high quality fleet of 18 Footer competitors and boats. The battle behind Gotta Love It 7 has been brilliant with close racing, top class action and exciting finishes, but the dominance of Team Seven has dominated the scene.

For the fourth consecutive race day, Gotta Love It 7 didn’t get the best of the start but the boat speed and boat handling of the crew is such that Gotta Love It 7 once again led at the first windward mark and was never headed from that point.

At the finish, 7’s winning margin was 1m 6s from Coopers 62-Rag & Famish Hotel, which came back strongly following a couple of unfortunate gear problems earlier in the regatta. The Rag crew of Jack Macartney, Mark Kennedy and Peter Harris were in fourth place at the Beashel Buoy on the first lap but put in a consistent performance to work their way into second place.

After the four races sailed to date (worst performance not discarded), Gotta Love It 7 has a perfect score of four points, followed by Mojo Wine (Lee Knapton) on 27, US champion Howie Hamlin (Harken) and Asko Appliances (Marcus Ashley-Jones) on 30, Thurlow Fisher Lawyers (Michael Coxon) and Appliancesonline.com.au (Micah Lane) on 32.

What followed was sensational viewing for the spectator fleet as boats raced at top speed to the wing mark off the southern end of Shark Island in Rose Bay. Smeg was looking strong but lost several placings when the team had some difficulties then lost the breeze along Shark Island.

The championship continues tomorrow (Thursday) with the following races on February 21 and concludes on Sunday 22 February. The club’s regular ferry will follow the racing, leaving Double Bay Wharf, alongside the clubhouse.