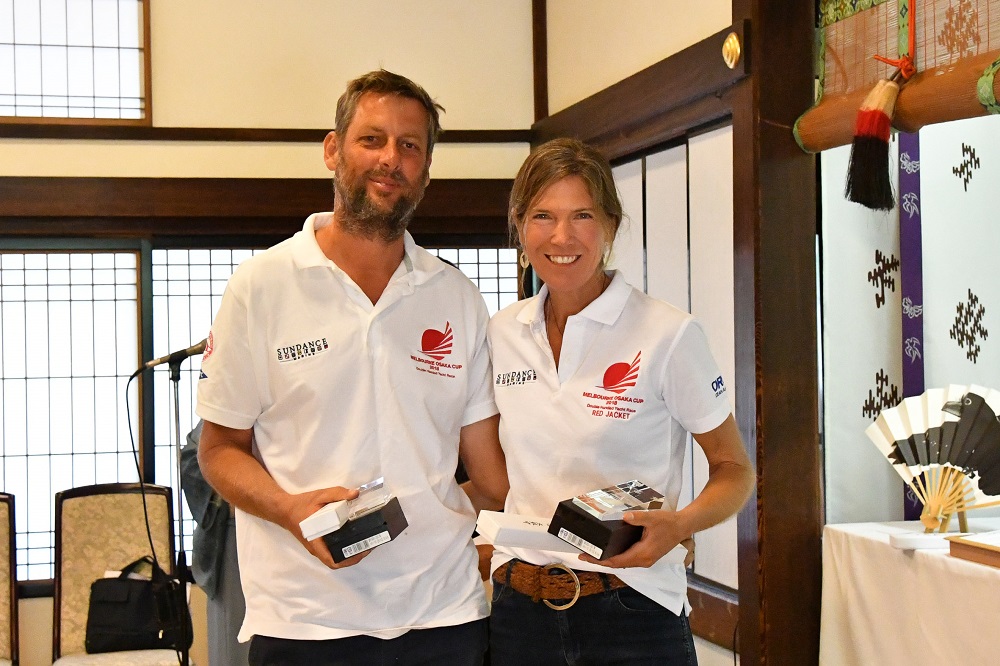 The 5500 nautical mile Sundance Marine Melbourne Osaka Double-Handed Yacht Race and return journey left Annette Hesselmans still champing at the bit, so she solved the problem by forming a short-handed female crew to take part in the Melbourne to Hobart (the Westcoaster) in the new Four + Autohelm division.

Both races are run by the progressive Ocean Racing Club of Victoria, which continues to come up with inventive ways to keep backsides on boats in our increasingly busy lives. It means an autohelm and a maximum of four crew can race as part of the main fleet for all offshore races emanating from the Club.

Hesselmans and crew are also the first ever all-female crew ever in a race that allows her, 20 year-old daughter Sophie Snijders, Sue Bumstead and Robyn Brooke – all experienced offshore sailors, to sail in their preferred configuration – shorthanded. All have sailed the Melbourne Osaka Race, with the exception of Snijders, who did the return journey with her mum and Snijders’ boyfriend Jack.

In the 440 nautical mile Melbourne to Hobart, the four women will race the Radford 12.2m Red Jacket, owned by Hesselmans (and her brother Andrew) , a remote nurse whose job takes her to locations such as Weipa, a mining town on the Gulf of Carpentaria coast in Queensland, where she is this week.

A Victorian, who calls Koonyum Range near Byron Bay home these days, says: “One of the reasons I’m doing the Melbourne to Hobart is to encourage other women to get out there and develop their confidence – have courage to give it a go – that’s the whole rationale.

“It’s about trying to raise the profile of women in sailing – that’s what I’m trying to do – to tell women to have a go and have confidence in themselves. Encourage them to push out of comfort zone and not be afraid.”

Hesselmans and Bumstead forged their relationship during the latest edition of the quadrennial Melbourne-Osaka in which the latter raced Victorian Water Tracks with Grant Dunoon, with whom she has done many other ocean miles.

“She is an incredible person and sailor. I am thrilled she is doing the Melbourne to Hobart with us,” she says of the Victorian who is currently working and lives in Airlie Beach, Queensland.

“Robyn (Brooke, from Victoria) did a previous Melbourne-Osaka with George Shaw. She is an inspiration to me – she’s confident and bubbly.”

As skipper for the Melbourne-Osaka, Hesselmans says, “It was a relief to start after two years of preparations and commitment. Sailing with my husband was truly special, as we knew each other’s abilities. I had Gerry's support and he respected my decisions and offered welcome ideas.

“In contrast, I brought Red back with two young people who hadn’t sailed offshore before, so I felt a greater sense of responsibility. I am very proud of what the three of us achieved, as it was a challenging voyage with constant squalls, headwinds – and crossing the equator with the notorious Doldrums.

“Sophie really stood up to the challenge. It was lovely to see her grow in confidence. I feel like I’ve proven myself too – 4,500 miles to Townsville. I am capable,” says Hesselmans, a commercially endorsed Yachtmaster.

“Sophie has bought her own yacht and wants to sail around the world with Jack. They wanted experience to do that, so sailing back from Japan was perfect. She’s always loved the ocean and she’s intuitive with sailing and competent.”

Sophie, who lives in Brunswick Heads (near Byron Bay in NSW), has done myriad ocean miles with her parents, who met sailing and have virtually owned a yacht since.

“I think the four of us will make a formidable team,” states Hesselmans. “A crew of four is extravagant really.”

And newly elected ORCV Commodore, Martin Vaughan, concurs. “We’re pleased to see Annette and her crew as the first Four + Autohelm entry and the first female entry ever in the race. They are very experienced sailors and this division suits them down to the ground, as it does others we know are entering,” he says.

On the challenges of sailing four-up, Hesselmans says: “Red Jacket has shallow bilge, so gets quite wet. Sue and Robyn are used to sailing on five-star boats, so their challenge will be moving to backpacker accommodation! But we’re looking forward to good food, good conversation, to enjoying the sail and being open in our communication.”

Red Jacket is currently at Airlie Beach. Once it arrives in Manly, Brisbane, Hesselmans will have the life raft serviced, fix leaky windows and do other jobs before the boat leaves for Melbourne.

As the four are not used to sailing together, to train, she says, “We’ll do Brisbane to Sydney or Sydney to Melbourne delivery together and work out watch systems etc. for the race. We’re planning to get Red to Melbourne by the beginning of December for final preparations.

“Are we looking forward to the race? We can’t wait,” ends Hesselmans.

For Notice of Race and to enter, go to: www.topyacht.com.au/db/kb/race_select.php?EventID=926