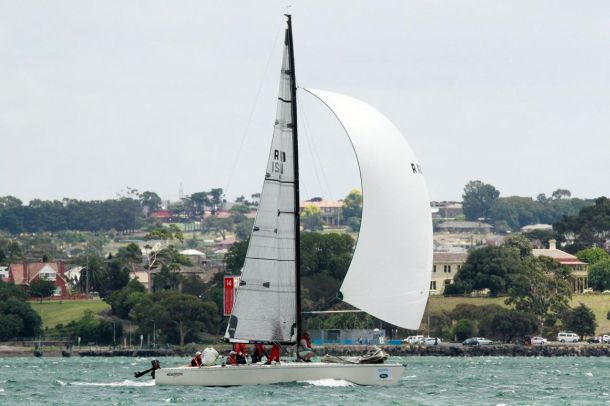 Australia Day at the Festival of Sails in Geelong, an hour south west of Melbourne. Some wear funny hats, wave flags patriotically, paint their faces blue, red and white and enjoy the shoreside ambience. Others dress in matching battle gear and head out onto Corio Bay to await the race officer’s preparatory signal and start sequence.

Oblivious to most on solid ground, the two remaining races of Victoria’s oldest sporting trophy and the southern hemisphere’s largest keelboat regatta, with near 300 entries, played out for the Rating Series and Performance Racing fleets.

The remnants of yesterday’s fresh sou’west winds prevailed for race 1, shifty and cold out of the south-west at 10 knots. The breeze then trended left to the sou’east, the prevailing summer sea breeze on Corio Bay (though the wind chill indicated otherwise) and quickly built to double figures for the decider.

Three divisions contested the Rex Gorell Rating Series incorporating the Victorian IRC and AMS Championship and the winners have been declared.

“I’m very pleased,” said the winning skipper. “My crew went well, the boat was fabulous and we managed to fix everything from yesterday. We had a spare set of main battens in our van and two older kites which did the job.”

After celebrating with his crew, including tactician Nathan Wilmot and “secret weapon” Noel Drennan, Hanna is off to get some antibiotics. “I’m sick as a dog. Yesterday didn’t help,” he added, referring to the drenching he copped when the boat nosedived.

Tactician for the series and overseeing the boat’s brand new black 3Di sails was North Sails’ Richie Allanson who agreed, “There was an element of perfect DK weather, but it wasn’t handed to us, the boys worked really hard. It’s good to see Bob’s hard work and commitment to the boat paying off.”

“We had a pretty wild crew, some of whom were a bit embarrassing at times,” Cox offered. “Fifty percent of the crew are young and the other half old. I’m 70 and I have to be tolerant.”

“I do a lot of the work myself; she’s operational.” Certainly is Bob.

Rating Series division 2, sponsored by Gill, was this morning the tightest of all divisions. When final points were added to the progressive tally, two South Australian Beneteaus and one from across the bay at Sandringham had out-sailed the high performance fleet.

Jason Ward’s Beneteau First 40 Concubine was delivered to Geelong after the Sydney to Hobart in the hope of doing well. They did better than that, turning out a win. “We felt really welcome at Geelong and the competition was great,” Ward said. “Yesterday we broke the spinnaker pole. The guys off Wicked had a spare spar section in Melbourne so we executed a late night recovery job, got the part and fitted it. We went from a black pole yesterday to a white pole today; we think it was lucky for us.”

At the 173rd edition of the Festival of Sails, Grant Botica’s Victorian Adams 10 scored a fifth divisional victory from seven regattas.

Though Botica, helmsman Col Anderson and the crew made the pointscore victory appear effortless, the skipper acknowledged, “It was not easy sailing out there. We found the range of conditions unbelievable; wind, no wind, shifts all over the place, it had everything. I think we were a bit luckier than everyone else. I’d like to thank our competitors, especially Top Gun and White Noise, my crew and all the people who have helped me over the years.”

Local skipper Darren Pickering is another with numerous divisional honours and a decent trophy collection from 25 years of Festival competition. One more was added today, January 26 which is Australia’s national day, with a top finish in the Performance Racing division for Pickering’s Hick 30 called SixFootSix Larriken2 competing for the host, RGYC.

A margin of two points to Royal Brighton’s Farr 1104 Magazan 53 (N. McGuigan & G. Rowswell) was enough to clinch the series. Stirling Parker’s Lyons 30 Buck from the host club was third.

“We are ecstatic!” said Pickering dockside. “We didn’t know we’d won until we got the phone out and checked the result. The series offered great racing in a variety of breezes and courses; it’s good to mix it up. Our crew work was exceptional, even through the skipper managed to get them all wet on at least one occasion… This was my 25th regatta and as a crew we’ve done a lot of sailing. It all came together this weekend.” The highlight for the skipper was “yesterday’s big winds and wicked rides”.

Final words from the PRO

Festival highlights for Principal Race Officer Denis Thompson included “the range of light through to heavy winds producing good all-round champions. Everything worked well on the water and in the heavy conditions the sailors were sensible and showed good seamanship, which was really pleasing. It’s been a great event,” Thompson summed up.

He advises that the Festival schedule and dates for 2016 will change due to the fact Australia Day falls on a Tuesday. The organising committee will announce next year’s dates in the near future.

All Festival of Sails trophies have now been presented on the lawn of the RGYC and the longstanding regatta once again recognised for being an enduring and loved event run in a blessed location, a rare north-facing and protected inner harbour, thanks to the State Government of Victoria, City of Greater Geelong and the numerous commercial partners and sponsors.

Video highlights from the 173rd Festival of Sails available at http://festivalofsails.com.au/video-gallery