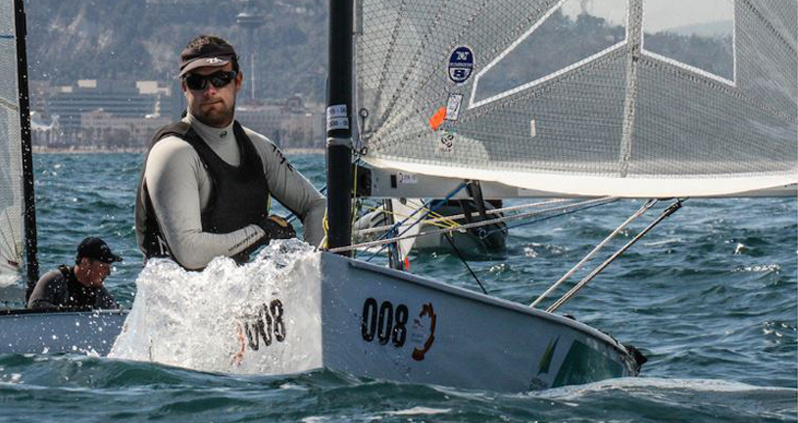 Tweddell in action before his injury. Photo Robert Deaves.

One of Australia's premier Finn class sailors faces a critical few days as he weighs up the prospect of competing at the upcoming World Championships in Hungary with multiple fractures in one of his hands.

Former World No.1 Oliver Tweddell’s early preparations for Tokyo 2020 were shaken by a peculiar injury during an Australian Sailing Team training session before Aarhus Sailing Week in Denmark in early August.

“I tacked, nothing out of the ordinary, I just came out of it and my finger was in a lot of pain,” Tweddell said.“I couldn’t move it and thought I’d broken it.”

The Victorian withdrew from the event and returned to Australia, where the severity of the injury was revealed. His wedding ring finger was broken into seven pieces between the palm and the knuckle.

The former world No.1, who moved to Australia from England aged 15, is now relying on professional advice over whether competing on Lake Balaton could risk permanent damage to his hand.

“If I’m told it’s not going to kill me, not going to cause me any permanent damage, I’ll give it a crack,” he said.“I want to race at the best level and it’s been the peak event for me for the whole season.

“I raced earlier in the year but had just had nine months out of the boat, so I was nowhere near the level I should be at. I was working towards the Worlds and really didn’t want it taken away from me like this. If there’s even the remotest chance I could be on the start line, then I’ll try to do it.”

Tweddell’s hopes rose after scheduled surgery on August 23 was postponed, leaving the door ajar for a late dash to join Australian Sailing Team colleague Jake Lilley – fresh from America’s Cup racing with Team Artemis – and youngsters Jock Calvert and Lewis Brake in the 62nd edition of the prestigious regatta, also known as the Finn Gold Cup.

“There’s been a concern that I was going to lose the function in my finger, that it would seize up not move ever again,” he said.“But now they’ve just told me to force it to move. It might break the bone again, in which case they’d operate anyway. But, if in their professional opinion, competing is doable, I’ll do it.

“I’m pretty resilient. I’ve had a lot of hurdles thrown at me in the past and I’ve never let them knock me down.”

In the lead up to the Gold Cup, teammates Brake, a former 49er sailor, and Calvert, an ex-windsurfer, are flying the Aussie flag in the Finn Silver Cup, which is the U23 World Championship, among nearly 50 sailors from 21 countries.