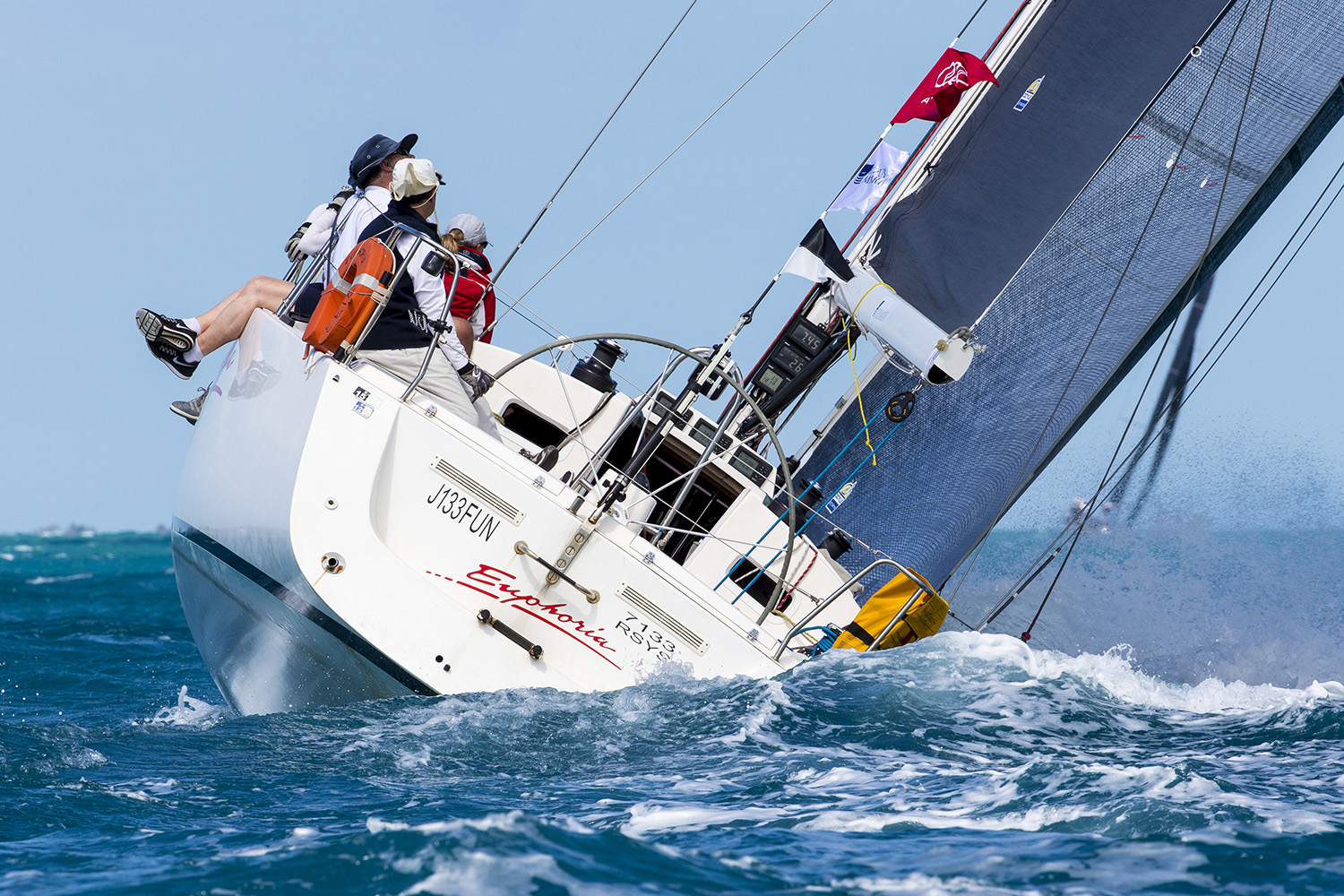 The winter tradewinds returned to the Whitsundays and Audi Hamilton Island Race Week on the penultimate day of competition, allowing for an expanded schedule to make up for some races missed due to light winds mid-week.

Trailables, Multihull Cruising, Non-Spinnaker and most of the Cruising fleet crews took in the sights on various island courses, the occasional Humpback whale complementing the idyllic combination of warm winter sun and breeze all day. The remaining divisions stretched their legs in the afternoon after short course racing on a choppy course to the east of Hamilton Island.

IRC Racing
HRH Prince Frederik of Denmark at the helm of the 66-footer NANOQ he’s chartered from the Oatley family and surrounded by a bevy of sailing superstars scored the double – wins in both the windward/leeward and islands course – to be IRC Racing pointscore leader by one point.

“Frederik steered the boat all day and did a great job,” said tactician and co-helmsman Iain Murray. “He had a wonderful time; it doesn’t get any better than that… beautiful breeze and a good combination of a shorter and longer course. It’s all thumbs up on our boat today.”

“Oats is set up for (Sydney) Hobart mode and Black Jack is set up for light airs; it’s amazing the cross-over….it’s huge,” Richards said.

“One boat’s so much faster in the light and the other is so much faster in breeze. Obviously there’s a lot of work for both boats to do in their weak areas, and then see how we go on Boxing Day. The fortunate thing for us is I think we can improve our light air performance a lot.

“We started the regatta in breeze and we are finishing in breeze. Everyone’s having a great time out there; the Prince took a win today, so he’ll be pretty happy,” Richards added.

Sailing well below the radar in the 66 and 100-foot dominated IRC Racing class this week has been Brent Fowler’s TP52, M3. “It’s hard being the only non-canting keel boat in the division; we’re obviously a bit slower and the others like to beat up on us on the start line,” said Fowler. “It’s hard when your sails are half the size of the others.”

“We were lucky to get Ben and also Lachie, who is a very accomplished navigator from Sydney,” said Roberts dockside after day five of racing. “With the amount of current here you’ve got to be quite aggressive with your navigation and I was confident wherever he put us. Jamie Wilmot is on the tactics and the rest of the guys are terrific too.

“We sailed poorly this morning and extra smart this afternoon. You’ve really got to push the boat around to catch the waves. Being a displacement boat, in downwind pressure we’ve got to make sure the crew are exhausted and catching waves to surf as much as possible.”

Racer/Cruiser
Adrian Walters’ Shaw 11m Little Nico and Anthony Coleman’s J133 Euphoria are on either side of the tug-o-war in the sexy Racer/Cruiser division. Walters had the edge thanks to a win in race four then in the afternoon passage race their fortunes changed dramatically, a 10th to Euphoria’s first place moving them back into second overall by six points.

Multihull Racing is in the hands of Ian Condor-Smith’s giant Tag 60 Stardust.

The race committee is considering their options for the final day of Audi Hamilton Island Race Week, on Saturday August 26. Given the forecast is again for 15-20 knots, the traditional closing Lindeman Island Race looks set to wrap up the 34th series of Australia’s pre-eminent keelboat regatta that has drawn 215 entries and close to 2,000 sailors from around the country and overseas.