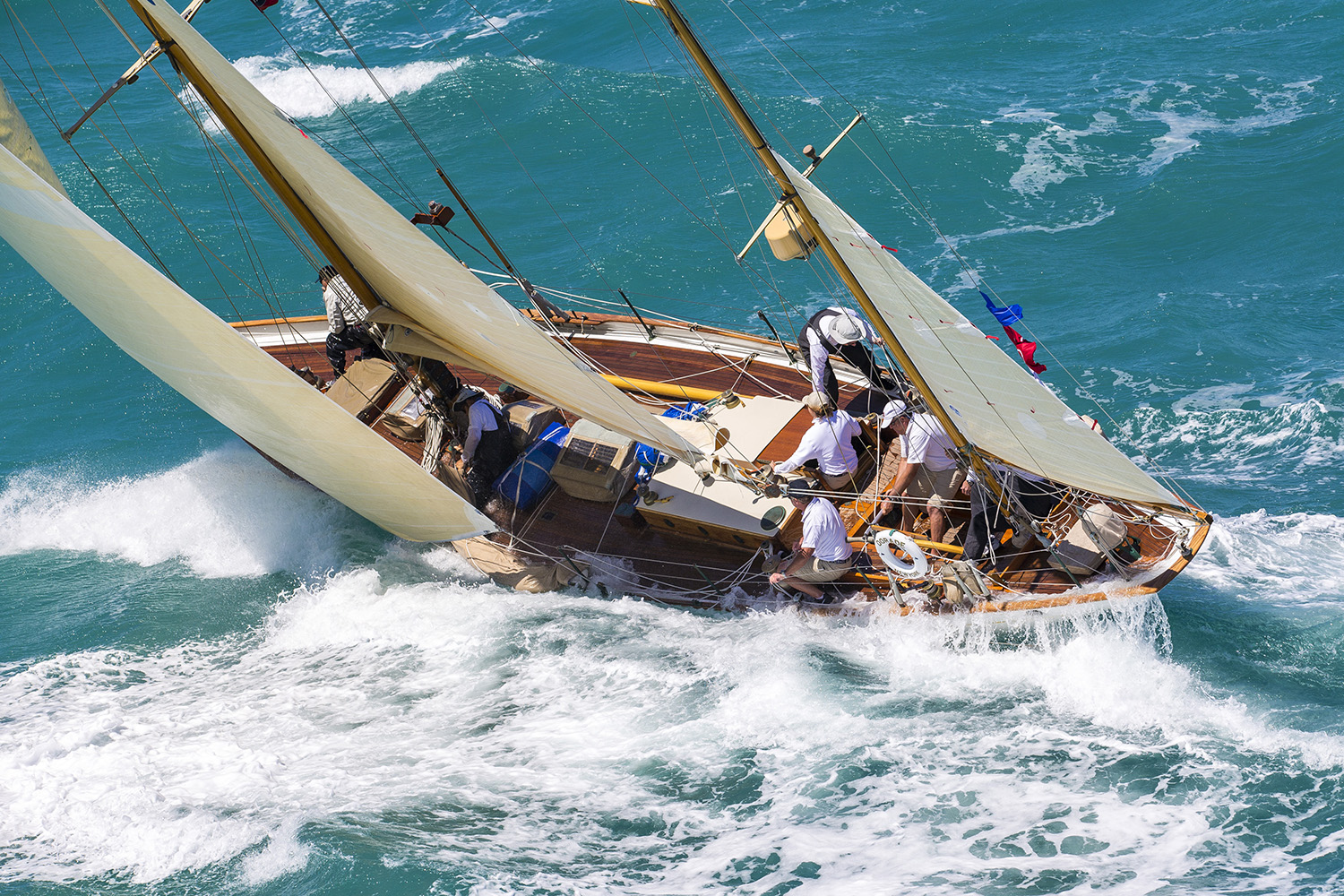 Close to 2,000 sailors racing in 15 different divisions at Audi Hamilton Island Race Week 2017 finished the series on a massive high regardless of whether they picked up a trophy in the Non-Spinnaker or IRC Racing division or any trophy at all.

Crews from Tasmania to Western Australia to the American classic Dorade on a Southern Hemisphere odyssey used what was left in the tank in the sou’east tradewinds 15-18 knots to firm up a divisional placing, or just see out the series in spectacular North Queensland winter sailing conditions.

“A win is a big thing for me,” the Crown Prince said. “I knew I was going into something fantastic by word-of-mouth, but that was it. I know this part of the world a little but I didn’t know the sailing conditions.

“Personally and statistically I did think I improved over the week. The first day was pretty wild; one of my top three sailing days ever. I have never steered such a big boat – I’ve steered 52s and 40-footers before. I had a brilliant crew; my friend Chris Meehan and Iain (Murray) put the team together.”

So will he be back? “Certainly yes; if they (sistership Alive) come next year I’m happy to defend my title.”

Like Oats, Harburg has the big names among his crew – Tom Slingsby, Tom Addis, Chris Nicholson, Will McCarthy, Anthony Nossiter, Mark Bradford and others – now they need time on the water to gel and learn the new boat after stepping up from a Volvo 70 program.

“We are 500% on where we were at the beginning of the week,” Harburg said positively at the Island’s marina after racing.

Skipper Mark Bradford added: “we’re still trying to figure this thing out. We’ve got to be more aggressive in the trim set up and how we sail the boat.

“There’s probably 40 people between two boats that are looking for ideas to improve, which is what yachting’s about. Across both boats there’s a bit of banter between the guys and a bit of ‘have you seen this? There’s people foxing and it’s kinda good fun.”

IRC Passage
Steven Proud’s Kernan 44 Swish’s victory in IRC Passage 1 division was no surprise, the strong Sydney crew putting enough separation between themselves and second place on the penultimate day to just enjoy the sights of the Lindeman Race and deliberately stay out of everyone’s way.

“We’ve stayed tight as a group for nearly three weeks now,” Proud said. “The best thing we did was have a week at Airlie Beach Race Week first, to get properly set up. We were all tuned-in ready and the conditions were perfect for us, we are really strong in light air and 20 plus knots.

“Billy Sykes from Norths helped put the team together and did a great job on tactics, and we had a great navigator in Andy Green; the currents and breezes are really challenging to work out. It’s fantastic here; I’d forgotten what a great place Hamilton Island is to come sailing.”

Racer/Cruiser
All week the battle raged in the Racer/Cruiser division between Anthony Coleman’s J133 Euphoria from the Royal Sydney Yacht Squadron and Adrian Walters’ Little Nico from Middle Harbour. Then, on the final day, Matt Owen’s Sydney 32 Onyx sailing for the ACT wedged itself in between the pair, finishing second overall thanks to a last-chance win.

“Little Nico is a seriously fast boat – it just disappeared over the horizon – but we managed to sail to our handicap and we are very happy with our result,” said Coleman on Saturday afternoon. “The boat’s been here once before, back in 2011. She’s 13 years-old and we have a majority of women crew so we are probably a bit unusual in that respect. It does make us quite popular in the evenings.

“We had a really good range of conditions over the week. We only lost the one day with no wind and the rest of the time it was decent sea breezes.”

Multihull Racing
The tiny trimaran Fury Road, George Owen’s VPLP design, stole the show from the giants in the Multihull Racing fleet. With the results of the final race added in, they beat Drew Carruthers’ Drew 15 Rushour and Ian Condor-Smith’s Tag 60 by two points.

“We are the mosquito, we are out there to annoy all the big boats,” Owen said dryly. “Airlie Beach was the first time we’ve raced. I’ve got two young guys, Tod Bartlett from Goolwa,

South Australia, and Dave Whitcroft from Philadelphia in the US, and I’m the crusty old person at the back with a bit of brawn and experience. Today it came down to the last race between Rushour, Star Dust and us; we just raced the clock.”

Employing his dry sense of humour Owen added: “It’s a boat that struggles in the light and windy and doesn’t like rough water; apart from that it’s great.”

Trophies will be awarded at a gala function this evening at the island’s Convention Centre.