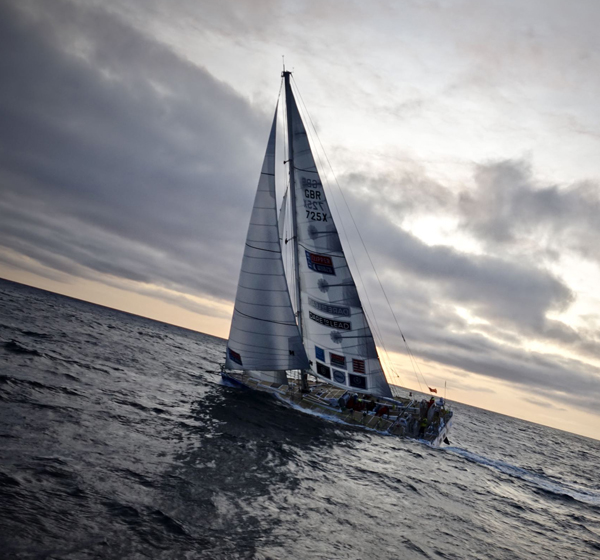 Unicef remains in the lead for the fourth consecutive day of this opening race but the next 24 to 48 hours could be telling, with distinctly different strategies now in play within the Clipper Race fleet.

The leading three teams are still close together out front where the breeze filled in first, with Sanya Serenity Coast just 5Nm behind Unicef. Reporting a very positive last 24 hours on board, third placed Visit Seattle Skipper, Nikki Henderson, says: “The highlight of the last day – we found the wind. A fresh 15-20 knots in fact.

“The boat is in her element too. We lost our buddies on Unicef off the AIS (Automatic Identification System) yesterday afternoon, and now the Sanya Serenity Coast green triangle flirts on and off the screen to keep us on our toes.”

Also expressing relief at finding the wind again, Rob Graham, whose Nasdaq team has climbed up from eighth to fourth place in the last 24 hours, says: “How good was it yesterday evening when the breeze filled in, and we finally swapped our Windseeker for Yankeee 1?

“It picked up just a couple of knots but that was enough of a difference to get Nasdaq moving properly again after three weeks trickling along in light airs, (at least it felt that long). We've certainly had some good practice for the Doldrums proper.”

Behind the top four, the fleet is now spreading out widely with teams selecting very different headings as they seek out their preferred routes south.

Yesterday, Greenings was on its own, separate from the fleet after deciding early to take a westerly course. Skipper Dave Hartshorn explains: “As you can see, we are still north of the rest of the fleet and are now working out when to tack over on to starboard to make our way south without going too far back east.

“The majority of the fleet is heading south towards the bottom of the Bay of Biscay, while now four other yachts appear to be heading west with us. Since late afternoon, there has been much time spent running various scenarios through TimeZero Professional as to when to make the turn.”

Roy Taylor, Skipper of PSP Logistics, is one who has opted to head west. He and his team are currently eleventh, but is confident with the move, explaining: “PSP Logistics got bored of the wind hole and decided on a gamble.

“We are heading west to meet this irritating low-pressure head on, punch through him and pick up the nice northerlies on the other side, then run down for Madeira Island. It's a longer distance but we have been cracking on since 1400 yesterday at 9 – 10 knots.”

Qingdao, in ninth, has also broken away from the main course. Skipper Chris Kobusch says: “After a few days of light winds, we are now flying along in a 25-30 knot breeze. Our Clipper Race 70 is heeled over hard and not only the helming, but pretty much anything is much harder to do than usual when living at 30 degrees.

“We are sailing in convoy with GREAT Britain, who is only 6nM southeast of us and matching our speed and course. It is a head on head race which keeps everyone focused and competitive.”

Dare to Lead, currently fifth, has opted for the most easterly route off the coast of Spain, with Skipper Dale Smyth reporting: “It’s been a slow night for us under Windseeker, with the wind dying off completely at 0230 this morning to be replaced by a light south-westerly, which I assume is the start of the next depression.”

Back at the top, Unicef Skipper Bob Beggs is keeping a close eye on the competition, saying: “The first real tactical decisions of the leg are being deployed by individual yachts, and the one to watch could well be Dare To Lead which appears to be in a commanding position on our left flank and the next few days will see how this plays out.”

The next 48 hours will be an interesting period on the weather front for the fleet, as all the boats continue racing for the Trade winds. Teams could see gusts of up to 40kts if they pass through the southwest quadrant of the incoming low. The incoming front should have gusts up to 30kts.