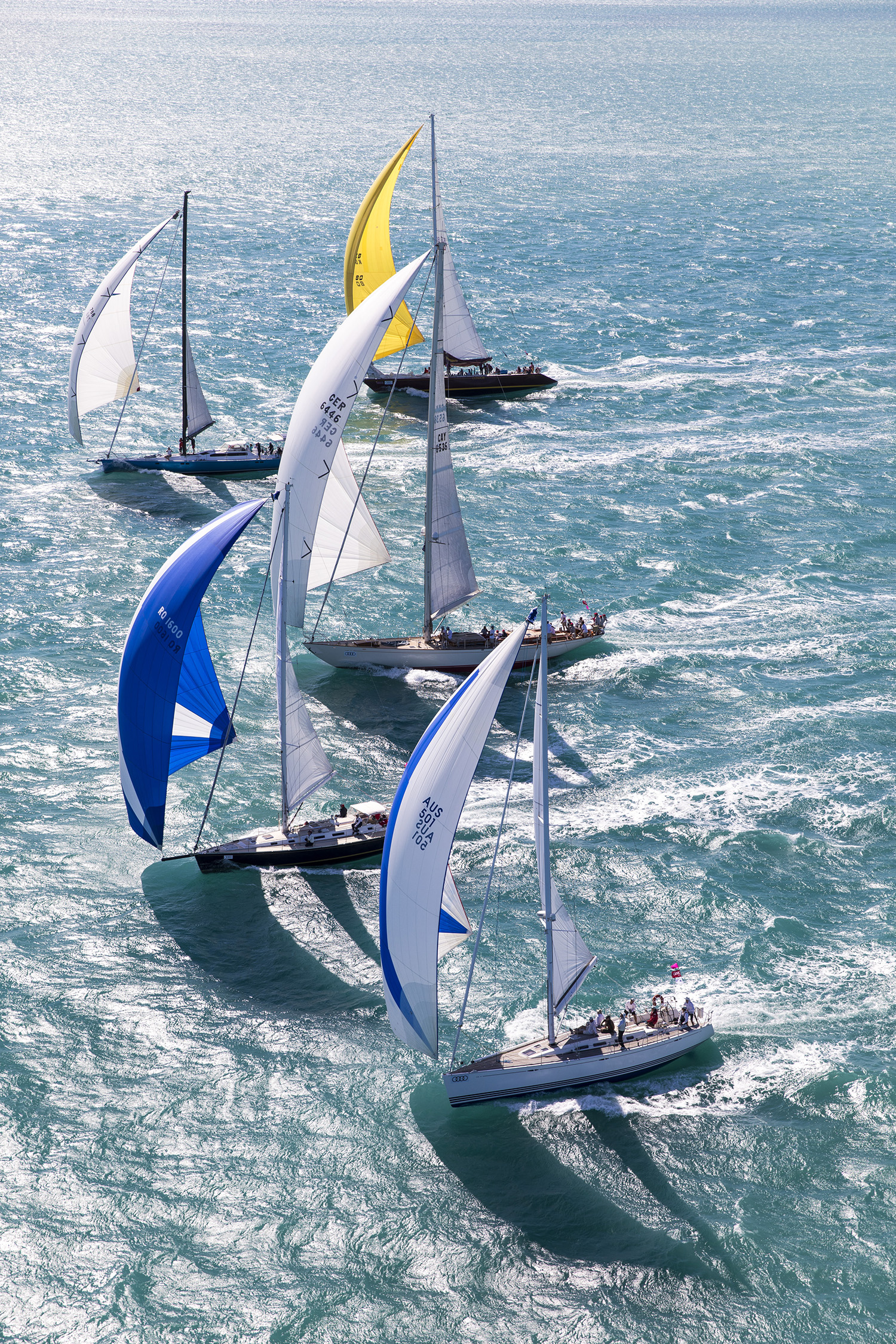 The cruising classes had a tightly fought Hamilton Island Race Week with nervous placeholders in all divisions looking over their shoulders going into the last day. In some divisions the leaders held on by their fingertips to keep top spot – a few using Saturdays races in 15-18kt SSE winds as their drop – while others had a glamour day to make a late charge and steal the chocolates.

Regatta director Denis Thompson noted the quality across the huge cruising fleet: “It’s been excellent racing and the one thing that stood out for me – apart from the two 100 and 66-footers going toe-to-toe – was the speeds and efficiency of the cruising divisions.

“There are some really good boats in there and some really close racing. We might have to call them something else next year!”

Ervin Vidor’s beautiful CNB 76 Charlotte with a crew of top 18 foot skiff sailors aboard held a narrow points lead over Paul Mara’s Adams 20 Helsal 3 from New South Wales going into Saturday’s series-closing islands race.
Despite a spinnaker blow out early in the race, Helsal 3 came good to steal the division win from Charlotte by just one point.

Third in division was Alison and David Molloy’s IOR maxi Condor, the crew celebrating their 10th Race Week anniversary. “It was a busy year, we had six newbies” said David adding, “over 10 years we’ve put at least 160 crew through Race Week. One of the guys who was with us in the first year, Pete Jarvis has essentially been our mainsheet man ever since and there were five on board this year who have done five or more outside of Alison and I. It’s a big family.”

Thomas Hoogenbosch with his Victorian Bavaria 46 Therapy did well to secure a very close one point division win from James Whittle’s Hanse 495 Takani, which made a late charge in Saturday’s two island races.

It proved second time lucky for the Safety Beach team from Mornington in Victoria, having bought the boat at the Sydney Boat Show last year and sailing it straight to Race Week.

“Our crew was the highlight for me, they just melded together so well” said Hoogenbosch. “My wife will have some say in this of course, but I hope we’ll be back next year to defend our win.”

John McConaghy, whose self-built McConaghy 47 Second Time Around was leading the division going into the final race, but he was not optimistic about holding the top podium spot, given the heavier handicap they gained as the week wore on.

“We’re going to need a jumbo jet strapped to the back of the boat to get a division win now, and I’m not sure that even that will do it!”

As it turned out the jumbo jet couldn’t do much to help, but their earlier performances saved the day, putting them in top spot when the scores were tallied on Saturday August 26, 2017. “We sailed hard and had a great day” said McConaghy after the race, “but it made no difference, we ended up near enough last on handicap. It was just as well that we could take the last one as our dropped race.”

Anthony Bishop, who recently took over the ownership of the Windcraft brand, led by example with a win in their division aboard his own Dehler 30 Rocksalt by one point from Greg Tobin’s Dehler Magic and Peter Mumford’s photogenic Avventura. Better still for Bishop, the top eight of the 13 boats in the division were all Windcraft models.

‘I’m delighted with Rocksalt’s victory and I would have been equally as happy if any of our boats had won the division,” Bishop said.

It was a last gasp win for Jonathan Threlfall’s Jeanneau Sunfast 36 Campeador, taking the division win from David Stoopman, owner of the Victorian Beneteau Oceanis 40 from Victoria Easy Day, for whom it proved to be anything but. Threlfall was delighted at their last minute podium topper, “We were amazed that we won and loved the regatta, it was really well run.”

Anyone who thinks winning a Non-Spinnaker division is simple hasn’t sailed against Andrew Molnar and his Oceanis 48 Hub from Victoria. Molnar, who also owns a Sydney 38 which he races with his crew out of Sandringham Yacht Club, was not there to make up numbers: “We came up to Race Week to win. We invested in new sails and had a dedicated navigator on board, who’s only job was to work out where we needed to be.”

And win they did, taking out their division by two points from Mal Billings’ Victorian Bavaria 49 Uluwatu.

Noel Borel, whose East Coast 31 Kulani won their division with a group of dinghy friends aboard, bought the 1976 launched boat as something of a wreck and has spent the last five years restoring her. “It’s been a fantastic regatta and we’ve done way better than we ever expected,” said a delighted Borel.

All results for all divisions are available here